President Donald Trump speaking at a rally in downtown Phoenix on Tuesday. He alluded to a presidential pardon of former Maricopa County Sheriff Joe Arpaio in his speech, and the White House announced Friday that Trump issued the pardon. (Photo courtesy of CNN) 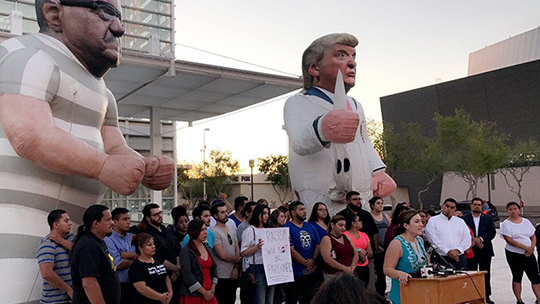 Several immigrants’ rights groups gathered in front of the Sandra Day O’Connor United States Courthouse on Friday after news of Sheriff Joe Arpaio’s presidential pardon was announced. Behind them are inflatable caricatures of Joe Arpaio and Donald Trump. (Photo by Thalia Varelas/Cronkite News) 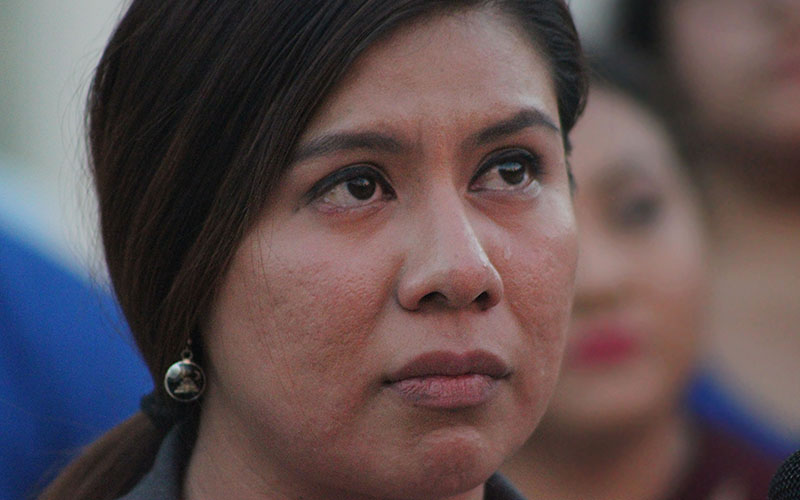 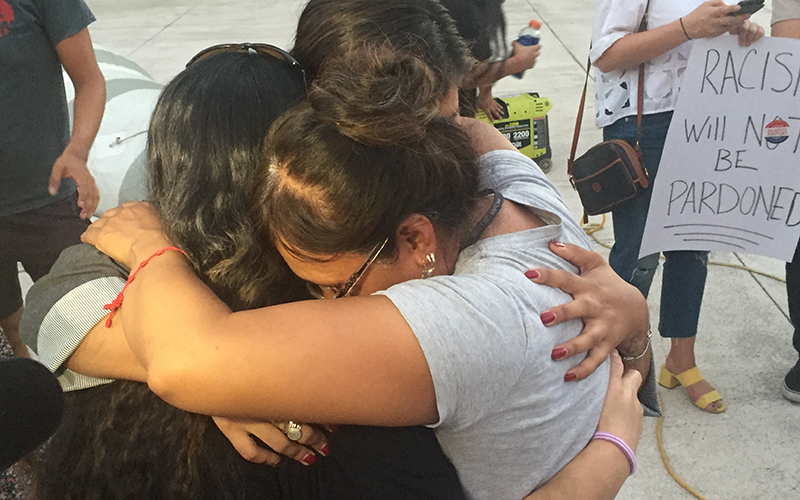 Arpaio is a fervent Trump fan who was convicted of criminal contempt of court in July for violating a federal judge’s order to stop targeting Latinos in traffic stops. Arpaio, 85, was scheduled to be sentenced on Oct. 5.

“I appreciate his pardon. He’s a big supporter of law enforcement, and I will be speaking more about this probably Monday. I’m not guilty. We’ll see what happens when I talk Monday,” he said. Arpaio plans to hold a news conference Monday.

Trump did not announce the presidential pardon during his rally in Phoenix on Tuesday, as many expected, but he did say, “I’ll make a prediction – I think he’s going to be just fine, OK. But I won’t do it tonight because I don’t want to cause any controversy.”

Arpaio was simply doing his job in fighting illegal immigration, the president said at the rally.

Friday’s statement from the White House touted Arpaio’s lengthy law enforcement career and cited his “life’s work of protecting the public from the scourges of crime and illegal immigration.”

The release ended with the statement, “He is a worthy candidate for a presidential pardon.”

Arpaio reacted to the news by thanking Trump, calling the conviction a “political witch hunt by holdovers in the Obama justice department” and sharing a link for collecting donations for his legal defense fund.

..how they can con’t to help, a donation to my Legal fund go directly to paying off legal fees from this fight https://t.co/wM6SDLLxEN

Shortly after the announcement, community organizations gathered in front of the Sandra Day O’Connor U.S. Courthouse in downtown Phoenix to denounce Trump’s decision.

Organizations such as LUCHA, Puente, Center for Neighborhood Leadership and other community members showed their disappointment.

They said they themselves or loved ones have been victim to Arpaio’s raid. Viridiana Hernández, executive director of the Center for Neighborhood Leadership, expressed her anger and disappointment. She said her family was never the same after her father encountered one of Arpaio’s raids.

However, Hernández said she was expecting Trump’s pardon to come at some point after his appearance in Phoenix on Tuesday. “When he announced it, we already knew. We knew he was going to do it, but we didn’t know when.”

Phoenix City Councilman Michael Nowakowski was present at the gathering to show his support to the community. Nowakowski said they still succeeded, “Even though Joe Arpaio got a pardon from the president, we got him out of office. That’s the power of the people.”

Arpaio and his supporters have long denounced the contempt of court charge as politically motivated. U.S. Rep. Paul Gosar, R-Prescott, said on Twitter said the proceeding had been “a mockery of justice.”

This politicization of the process made this prosecution and court proceeding a mockery of justice. @RealSheriffJoe deserves our thanks

Arizona Sen. John McCain directed his negative reaction toward Trump in a statement on Twitter.

.@POTUS‘s pardon of Joe Arpaio, who illegally profiled Latinos, undermines his claim for the respect of rule of law https://t.co/2FckGtwQ2m

Arizona Sen. Jeff Flake, who has been critical of the president, shared his lukewarm reaction on Twitter.

Regarding the Arpaio pardon, I would have preferred that the President honor the judicial process and let it take its course.

“Pardoning Joe Arpaio is a slap in the face to the people of Maricopa County, especially the Latino community and those he victimized as he systematically and illegally violated their civil rights,” Stanton said in the release. “Donald Trump can ignore the rule of law, but it was our voters who removed Joe Arpaio from power.”

“The court made its decision, the president made his, but the people had the final say in November. We are dedicated to earning trust and confidence from the community while ensuring the Maricopa County Sheriff’s Office delivers exceptional law enforcement services,” Penzone said in a release.

Immigration activists and Democratic leaders had previously criticized the possibility of a presidential pardon.

“It would absolutely be a miscarriage of justice,” Laila Ikram of the Council on American and Islamic Relations said on Tuesday before the rally.

U.S. Rep. Raul Grijalva, D-Tucson, said Tuesday before the rally that if Trump pardoned Arpaio, it would “deepen the divisions that are already deep enough in the country.”

Grijalva posted a statement to Twitter on Friday saying Arpaio did not deserve a pardon.

Joe Arpaio does not deserve a pardon. His whole life he has acted with the liberty of being above the law. Now Trump proves that right.

A former Drug Enforcement Administration agent, Arpaio served as the Maricopa County Sheriff for six consecutive terms. During his 24 years in office he became known as “America’s toughest sheriff.”

Arpaio, widely known for being being tough on crime and illegal immigration, instituted “creative” punishments for inmates, such as dressing them in pink clothing. He also ordered the construction of Tent City, an outdoor jail near downtown Phoenix that drew criticism from human rights groups for years.

In 2011, the U.S. Department of Justice issued the results of an investigation into the Arpaio-led Maricopa County Sheriff’s Office that specifically called out practices of racial profiling and discrimination against Latinos. The report said the MCSO engaged in “unconstitutional policing” and threatened civil action against the Sheriff’s office if action wasn’t taken to correct the policies.

After Arpaio failed to make changes, the DOJ filed a civil case against him and the MCSO in 2012. In 2013, following another class action lawsuit over discrimination involving traffic stops, Arpaio was ordered to change MCSO policies to stop racial profiling against Latinos and detaining people solely on the suspicion they were in the country illegally. He didn’t comply and in 2016, was charged with criminal contempt of court.

Arpaio ran for a seventh term as sheriff last year, but he was defeated by Penzone, a former Phoenix police officer, in the November election.

Other Arizona elected officials took to Twitter to share their thoughts on Friday’s announcement. U.S. Rep. Kyrsten Sinema, D-Phoenix, said she was dismayed.

I am dismayed by the President’s decision to pardon Joe Arpaio. Arpaio hurt Arizonans & cost taxpayers a great amount of grief & money. 1/2

U.S. Rep. Trent Franks, R-Glendale, referred to Arpaio as “honorable” and said he believed the pardon was the right thing to do.

The president did the right thing — Joe Arpaio lived an honorable life serving our country, and he deserves an honorable retirement.