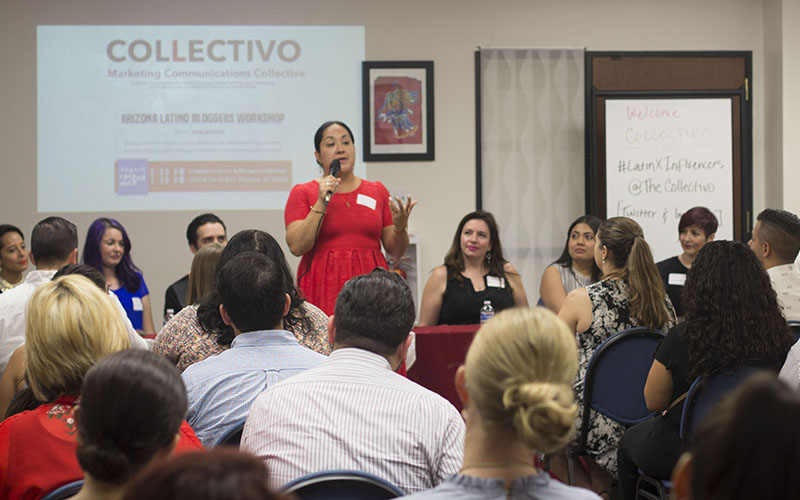 Natalia Ronceria speaks to the crowd attending the second annual Latino Blogger Showcase with the participating bloggers behind her. (Photo by Lysandra Marquez/Cronkite News)

On hand were bloggers who just completed Collectivo’s workshop, helping to guide and give insight to those in attendance who have never created a blog before but want to learn how. Specifically, the workshop was developed to provide a forum and resources for Hispanic bloggers in the Valley.

Collectivo co-founder, Joshua Molina, said they would become aware that clients wanted to work with Latino bloggers in Phoenix, but had little access to local talent.

“How this workshop came about is my other co-founder, Eric Diaz, he’s really good friends with a really popular blogger, Kathy Cano-Murillo, and they came together to create a workshop for up-and-coming Hispanic bloggers because Kathy realized that she was one of the few hispanic bloggers being invited to blogging events,” Molina said.

Cano-Murillo, who has taught the past two workshops but was not in attendance, has greatly contributed to the growth of the program, Molina said.

Natalia Ronceria, a Collectivo board member who moderated the event, explained the process was selective. The program received 75 applications this round, of which they picked seven blogs to work with, requiring a commitment of a half day on Saturdays, for five to six consecutive weeks.

The types and topics of these blogs ranged from arts and culture, to lifestyle and traveling.

The husband and wife team made up of Thania Betancourt Alcazar and her husband, Jose Alcazar participated in this year’s workshop. Together they run a YouTube channel called Subculture Recall, which they want to expand into a web-based business using the tools they’ve learned.

“Since we started the class we have tripled our subscribers from where we started. We became better storytellers. I think that was pretty awesome,” Betancourt said.

Avis Rojas, a young Honduran woman who participated in the workshop, runs a blog exploring the realities of living within the Latino diaspora in Arizona.

“I went to a travel blogger conference and using everything I had learned in the workshop, I was able to communicate effectively what my blog was and that led to sponsored opportunities down the road. So, right away, putting all the tools to use for sure,” Garcia said.

Garcia also spoke about recognizing the need for a program tailored to Latinos.

“I think it’s because we offer a different perspective for sure, and we kind of cater to two different communities. We have the bilingual aspect, Spanish and English. Collectivo does a great job of not only catering to the culture of the Latino community but also how to do it in English and Spanish and in Spanglish,” Garcia said.

While the workshop was initially aimed at female Latina bloggers, after receiving an application from a male blogger during the first round, the organizers decided to make the workshop inclusive to both men and women. However, female participants are still the majority.

“We had this amazing guy who applied and we don’t want to say no just because you’re not Latina, right, just because you’re not a woman, so we said come on in and we changed the ‘a’ to an ‘o’ (in Latina),” said Ronceria. “We didn’t pitch it that way this year, but go figure, our makeup is still predominantly women, and as you can see the men are actually partners.”

Blogger Zulema Montenegro is already planning on attending the next workshop, adding she didn’t know resources like this exist.

“I RSVP’d literally two hours before it started, and I made it over here and I had no idea it was even a thing,” she said.

Collectivo is already taking applications for their third workshop, which Ronceria said will be taking place in the spring of 2018.

“This is a launchpad,” she said. “We hope we have helped to give more foundation to all of these amazing blogs that you’re going to hear from so that now the sky truly is the limit.”