Chispa, a Latino advocacy group for the League of Conservation Voters, launched the Clean Buses for Healthy Niños Campaign in April. Leaders said they have pushed Gov. Doug Ducey for a commitment. 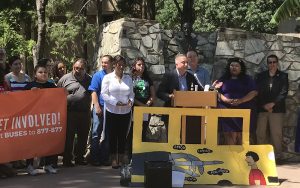 John Gomez, governing board vice president of the Cartwright School District, speaks about the Clean Buses for Healthy Niños campaign outside the state Capitol in Phoenix on Thursday. (Photo by Samantha Pouls/Cronkite News)

Patrick Ptak, a spokesman for the governor’s office, said he could not comment because they “were not aware of the issue or what is being said about it.”

The settlement came out of a United States government lawsuit that charged Volkswagen with rigging its “clean diesel” vehicles to cheat on emissions tests. The settlement requires the company to pay about $15 billion to compensate customers and mitigate pollution, according to the state.

Arizona will receive its funds over a 10-year period, and the state must use the money to reduce nitrogen oxide emissions. The state must come up with a plan and submit it to a trustee, according to the state. 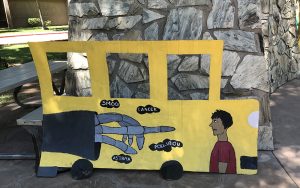 A cardboard bus made by Chispa volunteers shows the harmful effects of vehicle emissions. They spoke out about diesel emissions at a rally at the Arizona state Capitol. (Photo by Samantha Pouls/Cronkite News)

“This $57 million fund is coming to the state as a consequence of cheating an emission and trying to turn the corner, so let’s use that money correctly,” Congressman Raul Grijalva, D-Ariz., told the crowd at the Capitol on Thursday.

Community members at Thursday’s rally said the buses also harm communities since they often idle in one spot.

“Kids in the community can’t go out and play when there are pollution warnings,” said Veronica Monge, a community organizer for Chispa.