Supporters of the North American Free Trade Agreement have credited it with much of the success of Arizona’s trade with Mexico and Canada, which bought $8.3 billion and $2 billion in goods from the state, respectively, in 2016. Here, trucks carry goods across the U.S.-Mexico border at the crossing at Otay Mesa, California. (Photo courtesy U.S. Customs and Border Protection) 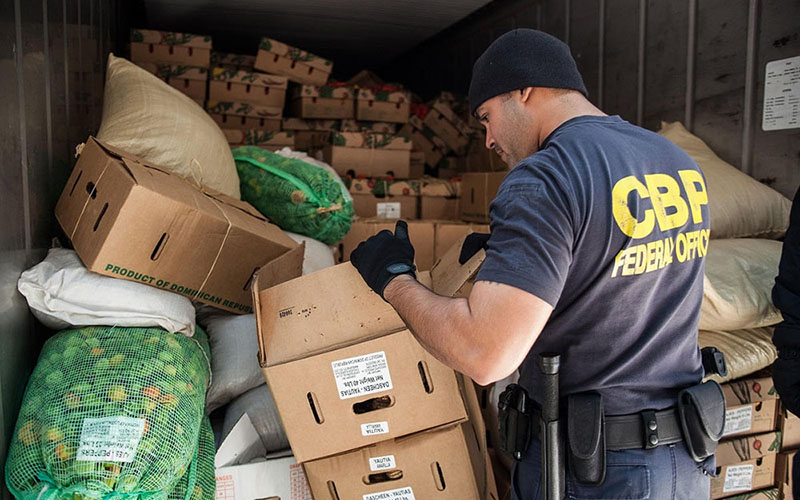 Agricultural interests are among the biggest supporters of NAFTA, with one Arizona dairy farmer saying President Donald Trumps suggestion that the U.S. might pull out of NAFTA “would be disastrous.” Here, a Customs and Border Protection inspects a truck full of farm produce at a station in Brooklyn, New York. (Photo by Josh Denmark/U.S. Customs and Border Protection)

WASHINGTON – One day after President Donald Trump’s prediction that the U.S. could “end up terminating NAFTA at some point,” business and political leaders expressed hope Wednesday that negotiations on a new deal will still be allowed to play out.

The president’s comments at a rally in Phoenix came just two days after negotiations formally began between the U.S., Canada and Mexico on revisions to the North American Free Trade Agreement.

“Personally, I don’t think we can make a deal because we have been so badly taken advantage of,” Trump told the crowd. “So I think we will probably end up terminating NAFTA at some point.”

While one Arizona business official criticized Trump’s Tuesday comments as “full of threats and bluster,” others noted that the president cannot unilaterally pull the plug on the deal – nor should he.

“We have not made backup plans if NAFTA were to go away because we would like to give the negotiations a chance to be successful before we start thinking about Plan B,” said Veronica Nigh, trade economist for the American Farm Bureau.

The 1994 deal lowered trade barriers between the three North American countries, allowing an easier flow of goods across borders. Trump campaigned on a pledge to do away with NAFTA, which he blamed for the loss of U.S. manufacturing jobs.

But supporters say the deal has had the opposite effect, boosting trade between the nations and creating millions of jobs in each country. Garrick Taylor, a spokesman for the Arizona Chamber of Commerce and Industry, said trade with Mexico has provided 5 million U.S. jobs and trade with Canada has created 9 million.

The 9 million jobs figure was echoed by Canadian officials, who said in a prepared statement Wednesday that they plan to continue working with “partners at all levels in the United States to promote Canada-U.S. trade, which support millions of jobs across the continent.”

“As we said last week, trade negotiations often have moments of heated rhetoric,” said the statement attributed to Canadian Foreign Minister Chrystia Freeland. “Our priorities remain the same, and we will continue to work hard to modernize NAFTA, supporting millions of middle class jobs.”

Without referencing the president’s remarks, Sen. Jeff Flake, R-Arizona, a strong proponent of NAFTA, said in an emailed statement that he “will continue to speak up for the countless Arizonans whose jobs and businesses rely on the billions of dollars that NAFTA injects into our state’s economy.”

Boyle said NAFTA has been a major gain for dairy farmers in Arizona and the U.S. generally, which is why he is concerned by Trump’s comments about terminating the deal.

“That would be disastrous,” he said.

Boyle said he mostly sees the president’s comments as rhetoric, but he won’t ignore them.

“I think it’s a threat and it’s certainly one we take seriously,” he said.

Taylor was more blunt. He called the president “full of threats and bluster,” and said Trump missed an important opportunity.

“The president spent more time trolling our U.S. senators than he did outlining a positive economic vision as it relates to trade. And especially for a border state like Arizona,” Taylor said. “Exiting the agreement would be terribly destructive to the U.S. economy.”

But Trump acknowledged that any action will be a long time coming. “You have to wait a long time” for the process to play out, he said.

Negotiations are open-ended, according to a timeline provided by the Trade Benefits America Coalition, and even after they are completed there are still months of additional steps involving Congress and administrative review before an agreement can be enacted.

Nigh said the farm bureau takes comfort in the fact that the process requires the president to work with Congress to finalize any withdrawal or change to NAFTA.

“That’s baked into every trade promotion authority bill and into every free-trade agreement,” she said.

A drawn-out process does not concern the farm bureau, which was not necessarily seeking renegotiation of NAFTA in the first place, Nigh said.

“I think we would look at those (potential changes) as improving on something that’s already quite good,” she said.

Taylor said business owners also did not push for changes, but they accept renegotiation as opportunity to modernize the 23-year-old deal. Despite the president’s reputation for shooting from the hip, Taylor said his remarks need to be taken seriously.

“A president threatening to dismantle the gateway for many U.S. manufacturers to the rest of the globe is not a path worth going down,” he said.