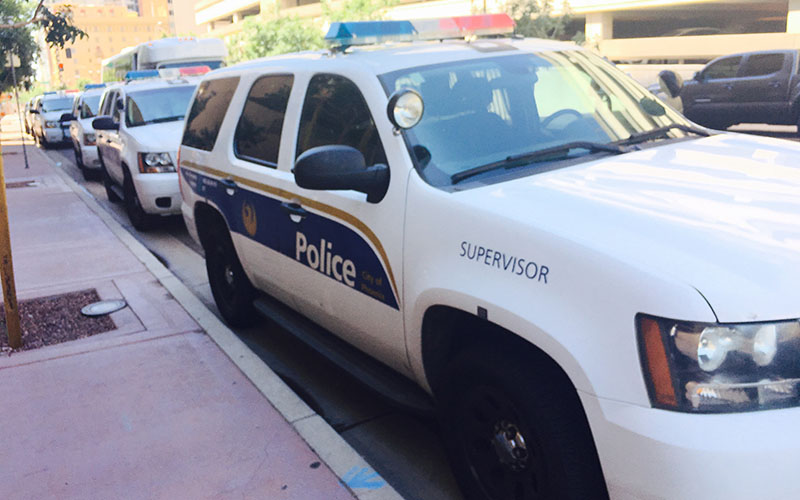 A line of five Phoenix Police Department vehicles outside of the Phoenix Convention Center on Monroe Street on Tuesday afternoon. (Photo by Monica Sampson/Cronkite News)

Trump’s remarks at the rally touched on a wide range of issues including racial tensions, media bias and immigration. He also hinted at a potential pardon for former Maricopa County Sheriff Joe Arpaio, which continued to draw sharp criticism on Wednesday.

Law enforcement had used tear gas and other crowd-disbursement tactics after police said protesters threw tear gas, bottles and rocks at officers, according to a statement from Stanton. He said Chief Jeri Williams told him what spurred the clash.

“To avoid a potentially dangerous physical confrontation with these disruptors, police used pepper spray – which had the unfortunate consequence of affecting some of those nearby who were peaceful,” according to Stanton’s statement. He also said he was “incredibly proud” of those who protested peacefully.

On social media Wednesday, some members of the public expressed concerns that these innocent bystanders had become victims of police brutality.

The American Civil Liberties Union Wednesday called for an investigation into reports of excessive police force. They took to Twitter to “urge witnesses to submit testimony” for the investigation.

“We have received many complaints that people, including children and people with mobility and respiratory issues, were taken by surprise when the police bombarded them with chemical irritants, with no warning,” an ACLU statement said. “The health risks associated with deploying so-called ‘non lethal’ weapons cannot be understated. Tear gas and pepper spray can have devastating health effects.”

Edward Maguire, a professor at Arizona State University’s School of Criminology and Criminal Justice, took four Ph.D students with him to the protests to observe the event.

“Much of the protest was handled well,” he said Wednesday. “I saw a lot of officers exercising restraint. For the majority of the event, they did fine. Where it fell apart was when they made the decision prematurely to deploy pepper balls and tear gas.”

Maguire said some of his students saw protesters throwing water bottles. However, he said the police should have done more to communicate with the crowd first and focused the more heightened response on people “engaged in violent and destructive activity while allowing those who are engaged in peaceful protest to continue exercising their First Amendment rights.”

Late Tuesday, Williams said at a news conference authorities arrested two people on suspicion of aggravated assault on a police officer and another person on suspicion of criminal damage.

Williams told reporters the response by police was appropriate “based on the information that we received and based on the fact of the charged and emotional nature of this.”

Officers applied different levels of force, including verbal commands to disperse to those within earshot before police deployed tear gas, Sgt. Jonathan Howard, a police spokesperson, said at the news conference.

However, some witnesses disputed whether the police gave the crowd enough warning. One Twitter user posted a video of the aftermath and commented: “Our attempt to remind the police that it’s a peaceful protest, but they still gas us, etc. and violate our rights.”

Phoenix City Council member Michael Nowakowski on Wednesday committed to an investigation to “determine the sequence of events,” according to a statement.

Trump alluded to a possible pardon at Tuesday night’s rally but CNN and other news outlets reported the White House had prepared paperwork for a pardon.

“Donald Trump continues to bring shame to the presidency by taunting Americans with threats he may soon pardon our disgraced former sheriff, Joe Arpaio, and shut down the government if he doesn’t get his way on funding for his foolish border wall,” Petra Falcon, executive director of Promise Arizona, an immigration and Latino advocacy group, said in a statement Wednesday.

“A pardon for Arpaio would be an endorsement of racism from the highest office in the land,” the statement said. “This kind of act would be an extraordinary intervention in our justice system that could threaten the public’s faith in law enforcement and the rule of law.”