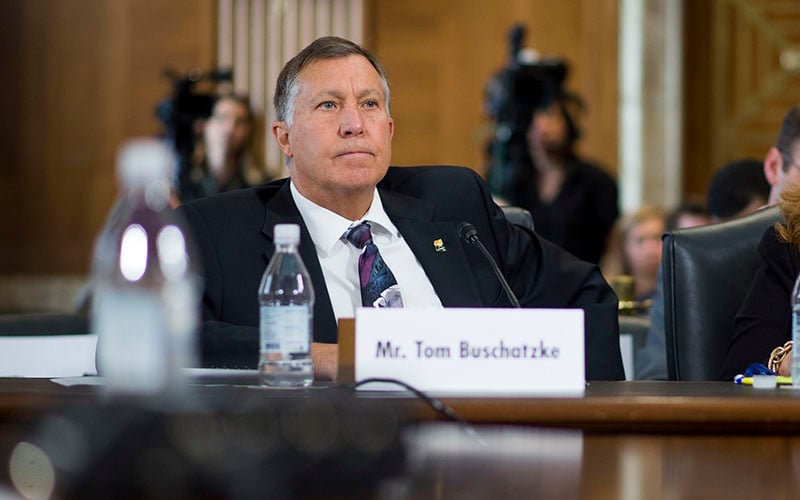 Tom Buschatzke, director of the Arizona Department of Water Resources, told a Senate panel that the state has long been a leader in water conservation and reuse, but that years of continued drought in the West have left the region still in danger of a water emergency. (Photo by Ben Moffat/Cronkite News)

Years of lingering drought and demand from growing cities have lowered Lake Mead water levels behind Hoover Dam. The situation has improved slightly recently, but the lake is still just 4 feet above the level that would trigger emergency conservation measures. (Photo courtesy U.S. Geological Survey) 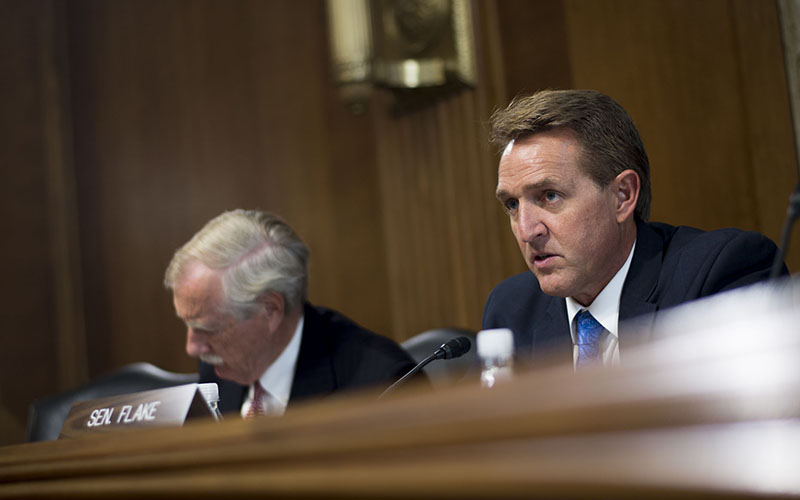 Sen. Jeff Flake, R-Arizona, chairs Senate Energy and Natural Resources subcommittee hearing on water and drought preparedness. Despite limits, he said consumers “expect when you turn on a tap that there’s water there, that the water will always be there.” (Photo by Ben Moffat/Cronkite News)

WASHINGTON – Arizona’s top water official told a congressional committee Wednesday that even though the state has done a lot right, years of drought still threaten to push the region into a water emergency in the next few years.

Tom Buschatzke, the director of the Arizona Department of Water Resources, said his office needs better coordination with other states and federal agencies and expressed concern that proposed cuts in federal funding for state could force agencies like his to do “more with less.”

His comments came as part of a Senate Energy and Natural Resources subcommittee hearing on “increasing water security and drought preparedness through infrastructure, management and innovation.”

The hearing comes against a backdrop of dropping water levels in Lake Mead that for years have alarmed governments that draw water from the Lower Basin of the Colorado River – Arizona, California and Nevada, as well as Mexico.

Buschatzke said in his written testimony that there has been “some modest improvement” in water levels at the lake, but it is still just 4 feet above the level that would trigger reductions to all the states that draw water from the lake. He said current predictions put the chance of such a “Tier 1” emergency at just over 30 percent by 2019 and 2020.

“For the past 20 years, drought has been a constant in Arizona,” Buschatzke said. “When shortage on the Colorado River is declared, about 84 percent of the total falls on Arizona.

“Collaboration and an all-hands-on-deck approach is the future of the Colorado River,” he said.

That future includes a continuing increase in consumer demand and expectations, he said.

“We need to maximize every drop of water that we have,” Buschatzke said.

That was echoed by Sen. Jeff Flake, R-Arizona, who noted that people “expect when you turn on a tap that there’s water there, that the water will always be there.”

“The critical nature of water management across the country has stimulated a variety of approaches to planning and financing,” he said.

Conservation alone, Buschatzke said, will not be enough to keep up with population growth in the state, but innovative reuse can help make up some of the difference. In Arizona, he said, reuse was recently given a boost by an Arizona Supreme Court decision that said treated wastewater is the property of whatever entity treated it.

“I think the certainty that that legal framework created in Arizona certainly has led to Arizona using quite a bit of its water for reuse,” he said. “In the Phoenix metropolitan area, almost 100 percent. The same in the Tucson area.

“We’ve long been leaders in re-use, and that was one of the key factors that allowed us to achieve that goal,” Buschatzke said.