On Monday, the Sun Devils will depart for a nine-day trip to Europe, which will feature stops in Barcelona and Rome. During its time overseas, the team will have the opportunity to experience different cultures, while also playing three games against professional teams.

“I’m not so much concerned about the outcomes of the games,” coach Bobby Hurley said. “We’ll try to win, but it’s building that chemistry that you want to try and build with the team and integrating some of the guys with what we want to do.”

That integration process began earlier this month in Tempe, as the team took the court to prepare for its voyage across the Atlantic. The Sun Devils are in the process of assimilating nine fresh faces into the program, six of which are eligible for play this season. 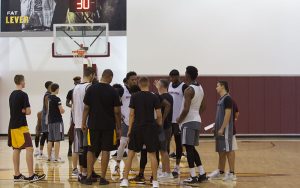 Ohio State transfer Mickey Mitchell and redshirt freshmen Vitaliy Shibel and Romello White will see their first game action with the Sun Devils this season, but are a bit further ahead on learning Hurley’s up-tempo system after sitting out last season.

Former Kansas forward Carlton Bragg will join the team on the trip despite having to sit out this season along with fellow transfers Rob Edwards and Zylan Cheatham, who are going to the Adidas Nations camp instead.

With such an influx of new talent, Hurley is grateful for the extended opportunity to get his team up to speed.

“We’ve had a lot more time than we’ve had in past summers,” Hurley said. “I think having the extra practices just gives us, I think, a big advantage and for the new guys learning what we do and how we play.”

Hurley’s up-tempo offense has been a staple in the Valley since his arrival from Buffalo in 2015. Justice, a senior guard from Mesa, thinks the Sun Devils’ strategy will pay dividends in Europe against teams that will have more chemistry.

“They are going to be out there executing and they have been together for a while so we have to be able to use our athleticism and (play) fast,” Justice said. “Our intense practices are pushing us and preparing us for that.” 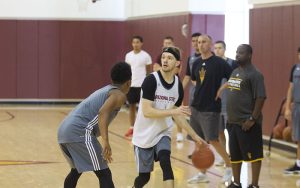 Senior guard Kodi Justice dribbles the ball up court in a team scrimmage during Tuesday’s practice in Tempe. (Photo by John Arlia/Cronkite News)

Justice said he’s excited for the trip, which will be the Sun Devil’s first venture abroad since a 2013 visit to China. NCAA programs are only allowed to travel internationally once every four years.

“It’s going to be fun being in a different country,” Justice said. “But this being my last year, we’re trying to get everything going early because we have so many young guys.”

One of those guys is sophomore forward Ramon Vila, who spent the summer abroad playing in the 2017 FIBA U20 European Championship in Greece. Vila averaged 11.1 points and 4.9 rebounds playing for his native Spain, who finished the tournament in fourth place.

“I’ve been following the statistics on it and it seems like he’s been posting some solid games over there,” Hurley said. “I think it’s good for him, all the practice time he gets there.”

“I would never not allow a guy the opportunity to represent his country so it’s a good opportunity and he’ll meet us in Rome.”

While ASU is working hard to prepare for the upcoming season, this trip isn’t strictly business either. The team will take in all of the cultural sites that Barcelona and Rome have to offer, including the Colosseum and Sagrada Familia.

Justice says he’s looking forward to one thing in particular: