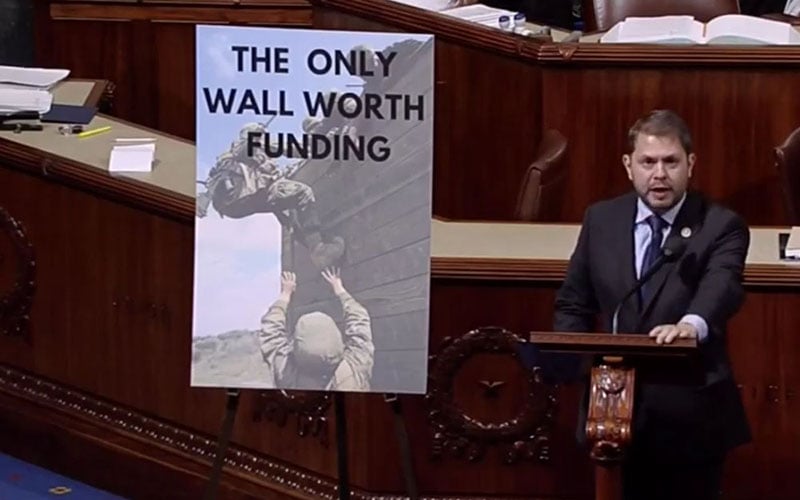 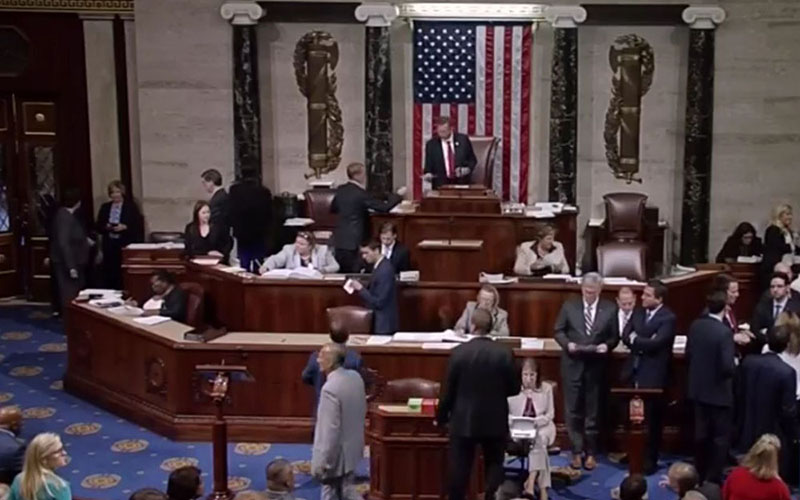 Lawmakers mill about on the floor of the House during a series of votes before approving a package of four bills – a so-called “minibus” – that included a controversial $1.57 billion to begin building a border wall. (Photo courtesy C-SPAN)

WASHINGTON – The House passed a $713.4 billion defense spending “minibus” Thursday that rolled four separate spending bills together with scores of amendments, including almost $1.6 billion to begin construction of a border wall.

The minibus – to fund Congress, courts and some parts of the military, among other programs – included everything from banning studies that cause “significant pain or distress to dogs” to language from Rep. Paul Gosar, R-Prescott, to do away with the use of Obama-era rules on weighing the “social cost of carbon” in federal agencies.

The measure ultimately passed 235-192 largely along party lines, with Democrats complaining that the process had been “rigged” to get the border wall funding as part of the larger bill, with no opportunity to get a separate vote on the wall.

Rep. Raul Grijalva, D-Tucson, tweeted before the vote that House leaders are “determined to build (President Donald) Trump’s wall. But they aren’t willing to attach their name to a vote.”

But two Arizona Democrats – Reps. Tom O’Halleran of Sedona and Kyrsten Sinema of Phoenix – were among the five who broke ranks with their party and voted for the minibus. Five Republicans also bucked their party to vote against the bill, but none were from Arizona.

Sinema said in a statement that she did not support every amendment in the bill and that she believes the border wall is “a waste of taxpayer money that will not ever be built, and won’t keep us safe.” But she said she cast her vote on the larger bill.

“It gives our troops a 2.4 percent pay raise, funds programs like the A-10 (fighter jet), Apache (helicopter) and F-35 (fighter jet) that support good Arizona jobs, and funds the Veterans Health Administration so our veterans can receive the care they deserve,” she wrote of her
support of the overall bill.

The border wall language was added Monday in the Rules Committee as a “self-executing” amendment, meaning it could not be voted on separately from the larger bill on the floor.

Trump, who campaigned on building a border wall that he would make Mexico pay for, had “personally asked” the House to fund the construction, Rep. Pete Sessions, R-Texas, said the Rules Committee hearing.

The fact that U.S. tax dollars were being allocated for the wall was not lost on Democrats, with Rep. Ruben Gallego, D-Phoenix, saying earlier this week that the Rules Committee maneuver was a “deceptive, legislative gimmick in order to avoid a clean up-or-down vote.”

The bill passed Thursday calls for $1.2 billion for 60 miles of border fencing along the Rio Grande Valley in Texas, $251 million for secondary fencing in California, and $38 million for planning purposes. None of the funds in this bill would go to a wall in Arizona.

The wall amendment was one of the most controversial of the scores of amendments on the bill, most of which passed with little fanfare.

One of those was Gosar’s amendment, added late Wednesday night, to ban the Pentagon from giving guidance on or regulating based on the social cost of carbon, a measure of greenhouse gas emissions used in President Barack Obama’s administration.

Gosar said his amendment aims to prevent the creation of “job-killing regulations” put forth by “easily manipulated” valuation models like the social cost of carbon measure.

Trump signed an executive order in March ending the Interagency Working Group on Social Cost of Greenhouse Gases, but other federal agencies are still using the social cost of carbon measure and Gosar said he wants to make sure the Pentagon will not be able to do so.

The Defense Department had said in 2015 that it was “clear that climate change is an urgent and growing threat to our national security,” and warned of an increase in natural disasters and potential refugee flows.

While Sinema praised the Defense funding elements of the bill, Rep. Andy Biggs, R-Gilbert, focused on the fact that Congress had “taken the first significant step to build the wall.”

He said in a statement that “we should not stop there,” calling for more paved roads near the border, more Border Patrol agents and better technology.

“Only then, will we have a secure border,” Biggs said.