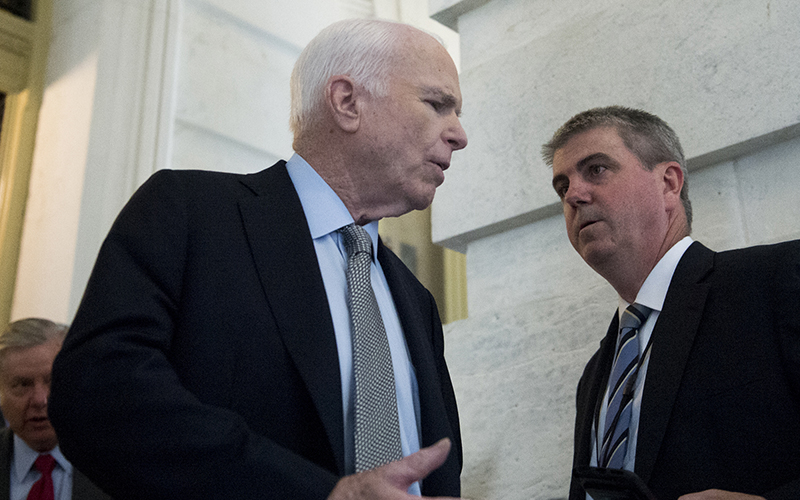 Sen. John McCain, R-Arizona, diagnosed a week ago with an aggressive brain cancer, made an emotional return to the Capitol where he lectured his colleagues on partisanship that he said has demeaned the body and made it less effective for Americans. (Photo by Ben Moffat/Cronkite News) 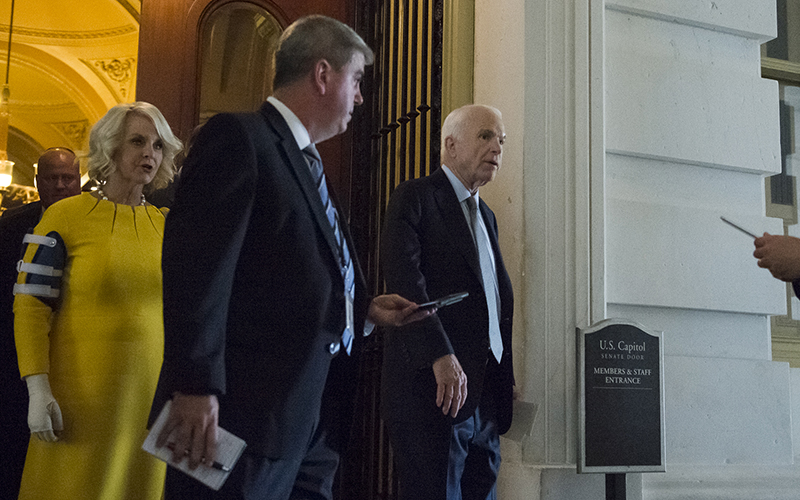 Sen. John McCain, R-Arizona, right, and wife, Cindy, leave the Capitol after he returned to vote to let the Senate continue working toward repealing or replacing Obamacare. The vote came less than a week after McCain was diagnosed with brain cancer. (Photo by Ben Moffat/Cronkite News)

WASHINGTON – Senate Majority Leader Mitch McConnell gave Sen. John McCain 16 minutes of floor time Tuesday and McCain used every minute of it, capping an already emotional return to the Senate with a call to action for his fellow lawmakers that hit every emotion on the scale.

McCain, diagnosed last week with an aggressive brain cancer and sporting a surgical scar over his left eye, took the opportunity of a procedural vote on health care reform to censure senators on both sides of the aisle for failing to trust each other and work together.

Sixteen minutes of lamenting what he sees as the downfall of the once-great Senate body.

Sixteen minutes of McCain reminding senators of their responsibility to help “this good and magnificent country” to thrive.

And, as befits a senator known as a maverick, 16 minutes of jokes that they’ll be sorry they wished him well and his promises to go his own way on the health care bill when one comes up for a vote.

Democrats cheered when McCain reprimanded Republicans for pushing through a healthcare bill without open debate or outside input. Then he pointed toward the Democrats to remind them that was exactly how they passed the Affordable Care Act in 2010, eliciting a bow from Senate Minority Leader Chuck Schumer.

Usually empty save for a few tourists and reporters, the Senate chamber was packed full for the health care vote. When McConnell first called the vote, about 30 protestors stood in the visitor’s gallery, shouting, “Kill the bill, don’t kill us!” before being removed.

Their shouts could still be heard as the vote began on whether the Senate would be allowed to proceed to debate the House version of the bill to repeal and replace the ACA, better known as Obamacare.

As Democrats sat silently, Republican senators answered the roll. Sen. Susan Collins of Maine was the first Republican to break ranks, voting against the motion, followed by Sen. Lisa Murkowski of Alaska. If the GOP lost a third member, the motion would fail.

Sen. Ron Johnson, R-Wisconsin, one of the last two Republicans to vote, was engaged in an extended discussion with a stern-looking McConnell when McCain walked in to thunderous applause from the chamber.

With the vote at 50-2, all 48 Democrats voted no in turn, leaving Vice President Mike Pence to break the resulting 50-50 tie in favor of the motion to proceed on the issue.

Pence then recognized McCain, who had asked McConnell before the vote for his latest 16 minutes of fame.

McCain started with a typical self-deprecating joke, claiming that the closest he ever got to being called “president” was when he served as president pro-tem of the Senate, acknowledging his two failed presidential campaigns.

He reminded his now-attentive audience that he had served as a Navy fighter pilot, but said his 30 years in the Senate was what he was most proud of.

During that time, he said, other senators’ “ambitions were frequently in conflict. They held different views on the issues of the day, and they often had very serious disagreements about how best to serve the national interest.”

“They knew that however sharp and heartfelt their disputes, however keen their ambitions, they had an obligation to work collaboratively to ensure the Senate discharged its constitutional responsibilities effectively,” he said.

As small talk and sidebar conversations ended, members and visitors focused on McCain.

“I hear the Senate referred to as the world’s greatest deliberative body. I’m not sure we can claim that distinction with a straight face today,” he said

While deliberations today “are often lively and interesting. They can be sincere in principle, but they’re more partisan, more of the time than at any time that I can remember.”

That, McCain said, can only be blamed on the lawmakers themselves.

“Both sides have let this happen … we all conspired in our decline, either by deliberate actions or neglect. We’ve all played some role in it.

“Certainly I have,” said McCain.

He called for an end to the partisan bubbles surrounding all Americans.

“Stop listening to the bombastic loudmouths on the radio and television and the Internet! To hell with them,” he said, his voice rising not only in intensity but also to be heard over the responding shouts and cheers.

Some teared up and some leaned in to listen. Sen. Bernie Sanders, I-Vermont, smiled as he watched, with his hand resting against his cheek, while Sen. John Cornyn, R-Texas, laughed and grinned at McCain’s words.

But McCain reminded his fellow senators that he is called the maverick for a reason and while he appreciated the well-wishes he received after his cancer diagnosis, he would not go easy on any of them.

He ended by saying he was going home for a while but that, “I have every intention of returning here and giving many of you cause to regret all the nice things you said about me.”