“I ended up being pretty decent on a bicycle and weight just started (coming off),” he said. “I lost about 75 pounds. In 2009, I ended up attributing the bicycle to getting on full-time as a firefighter.”

Shortly after achieving that career goal, Lyons increased his cycling regimen and started training for El Tour de Tucson, a 109-mile charity bike ride around the perimeter of the city. It was during his preparation for that event that Lyons realized his newfound hobby could be dangerous.

“A car pulled out on the street from an apartment complex, and I’m in the bike lane,” he said. “I go head over handlebars, tear up my chin. The car took off.”

That hit-and-run accident was just the beginning. Over the next two years, Lyons was a first responder to several crashes involving bikes and motor vehicles, including a few that resulted in fatalities.

As a cyclist, Lyons ended up in the hospital in 2011 after colliding with a car that turned in front of him as it turned into a convenience store.

Having been affected both personally and professionally, Lyons felt compelled to try to improve bike safety in Arizona. That’s when he reached out to Look! Save a Life, a nonprofit founded in Idaho that aims to “foster an environment of safety for all who utilize our public byways.”

“These incidents happen all too often in my community,” said Lyons, who established a chapter of Look! Save a Life in Tucson and serves as its executive director. “I wanted to create awareness and education, so instead of starting my own non-profit, I joined them, and we became a national organization in 2012.” 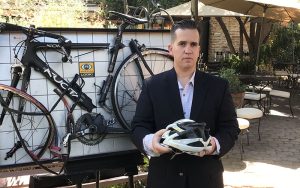 Brendan Lyons shows off the remaining pieces of his bike and helmet, which he says saved his life in an October 2013 bicycle accident. (Photo by John Arlia/Cronkite News)

Lyons, who left his job as a firefighter to devote himself to his job as executive director of the Look! Arizona chapter, said he was attracted to the organization because it holds both cyclists and motorists responsible for maintaining safe roadways.

“I think that safety is everyone’s responsibility,” Lyons said. “It’s not a one-sided attack on motorists to pay attention. It’s also the incompetence of the cyclist, too.”

When riding on the road, Lyons urges fellow cyclists to do everything they can to protect themselves, including never riding against traffic and always wearing a helmet.

He believes his helmet saved his life in his third, and most devastating crash, in October 2013. Lyons and his girlfriend Lorena were out on a morning ride when a distracted driver traveling 45 mph struck them from behind.

“I don’t remember anything.” Lyons said. “What I do remember is days later. I remember awakening in a hospital bed in excruciating pain. I remember a cornucopia of wires, tubes, electrodes and multiple IV lines extending from my body.”

Lyons spent a month in the hospital with several fractured vertebrae, a fractured pelvis and a traumatic brain injury. Despite the severity of his injuries, Lyons acknowledges things might have been worse had he not been wearing a helmet.

“My helmet is pretty crushed in, but had I not been wearing that, who knows?” Lyons said. “I’m lucky to be alive.”

A 2016 study by Australian statisticians Jake Olivier and Prudence Creighton concluded that helmet use reduces a cyclist’s chances of suffering a head injury by 51 percent and reduces the chance of fatal head injuries by 65 percent.

Despite the safety benefits, adult bicyclists are not required to wear helmets anywhere in the United States. In 21 states and the District of Columbia, there are laws requiring young riders to wear helmets, but the age mandate varies by state from as low as 11 years old to as high as 17.

Arizona law currently does not mandate helmets for cyclists of any age.

In 2014, state Sen. Steve Farley, D-Tucson, and a group of other lawmakers introduced legislation that would have required cyclists under the age of 18 to wear helmets. The bill died.

“All these bills that I have been putting in place over the years to improve bike safety, to improve pedestrian safety, to improve driver safety, they generally don’t get heard because it’s hard for a Democrat to get a bill passed in this place,” Farley said of the Arizona Legislature.

“I think this is as nonpartisan (of an) issue as you can get, keeping our transportation system safe for everybody, and it’s sad that some may inject partisanship into this process.”

Republican Sen. Karen Fann, vice chairman of the Senate Transportation and Technology Committee, says that helmet laws for bicyclists haven’t been passed because Arizona’s conservative legislature prefers to have fewer rules on the books, putting more personal responsibility on people.

While there is no state law requiring helmets for young riders, Tucson, Sierra Vista and Yuma have city ordinances requiring bicyclists under the age of 18 to wear a helmet. Pima County, where Tucson is located, also requires helmets for riders under 18.

Despite having faced strong opposition at the state level, Farley has faith Arizona will eventually get a law passed to protect young riders.

“I think at some point, just like we have booster seat laws now, which took a long time to get here, I think we will have mandatory helmet laws as well for kids,” Farley said.

Until that day comes, organizations like Look! Save a Life and local first responders have been proactively educating young cyclists on the importance of bike safety.

“Every day our crews are responding to bike accidents, from minor ones to kids getting severely hurt,” said Capt. Daniel Cheatham of the Phoenix Fire Department. “So it’s important to get this message out to try to reduce those.”

At a recent bike giveaway at a Phoenix Boys & Girls Club, Cheatham joined other Phoenix Police Department and Phoenix Fire Department officers to teach kids about the rules of the road. For many of the children, it was their first bicycle. The children strapped on their new helmets and took the bikes to an outdoor obstacle course to put the lessons into practice.

Phoenix police officer Steve Petrey, who took part in the training, said young riders need to learn to obey the rules of the road.

“You always want to be safe when you’re out there riding in the street,” he said.

Petrey stressed that the most important part of safety when it comes to bike riding is always wearing a helmet.

“Your head is so important because you’ve got to protect your brain,” Petrey said. “It’s really hard to fix your head. You can fix your arms and your legs with casts and everything, but when you hurt your brain or damage it in any way, sometimes it’s permanent. If you’re wearing that helmet, it’s going to protect you.”

Helmet laws aren’t the only safety-based legislation that Farley has been fighting to pass. The state senator, who recently announced he’s running for governor, has spent more than 10 years targeting distracted drivers.

Meanwhile, 47 states and the District of Columbia have adopted texting bans, according to the National Conference of State Legislatures. Additionally, Missouri has a texting ban for novice or teen drivers.

In April, Gov. Doug Ducey signed SB 1080, which will be Arizona’s first texting-while-driving ban when it goes into effect on July 1, 2018. The law, which was introduced five times by Fann before finally passing, bars minors from texting and driving in the first six months after they receive a driver’s license.

For Karen Wilson, that isn’t enough.

In the early morning of Sept. 29, 2015, Karen’s 30-year-old son, Daniel, was biking from his northwest Tucson home to his job as a custodian at Marion Donaldson Elementary School when he was rear-ended by a driver who merged into the bike lane while making a right-hand turn. 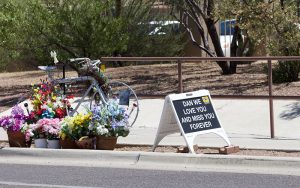 A ghost bike honors Daniel Wilson’s memory at the site of his fatal bicycle accident on La Cholla Blvd. in Tucson. (Photo by John Arlia/Cronkite News)

According to Pima County Sheriff’s Department records, the driver did not see Wilson’s bike, which was equipped with a flashing taillight. Karen Wilson believes the driver was distracted, although a Sheriff’s Office report on the accident concluded otherwise.

“I believe he was distracted one way or another,” Karen Wilson said in an email, adding that the driver would not have struck her son from behind “if he was paying attention.”

Daniel Wilson was not wearing a helmet and was pronounced dead shortly after the crash.

He was one of 29 cyclists killed in Arizona in 2015, according to Arizona Department of Transportation statistics.

“It’s very hard,” Karen Wilson said. “I do cry every day, and we’re just doing the best that we can.”

She volunteers regularly to try to keep her mind off her grief, but she also puts those lingering feelings to good use. A couple of times a year, Karen teams up with Lyons and Look! Save a Life to speak at different Tucson high schools. Both victims share their stories in an effort to warn new drivers about the dangers of distracted driving.

“Every kid, when they’re young, they think it won’t happen to me,” she said. “I didn’t think it would happen to us. It happened.”

While Karen still struggles to cope with the pain, she hopes that the students she talks to will take to her message and prevent accidents like Daniel’s from happening in the future.

“I do not want this to happen to another mother because it’s too painful,” she said.