Defense spending bill could include $1.6 billion to start border wall 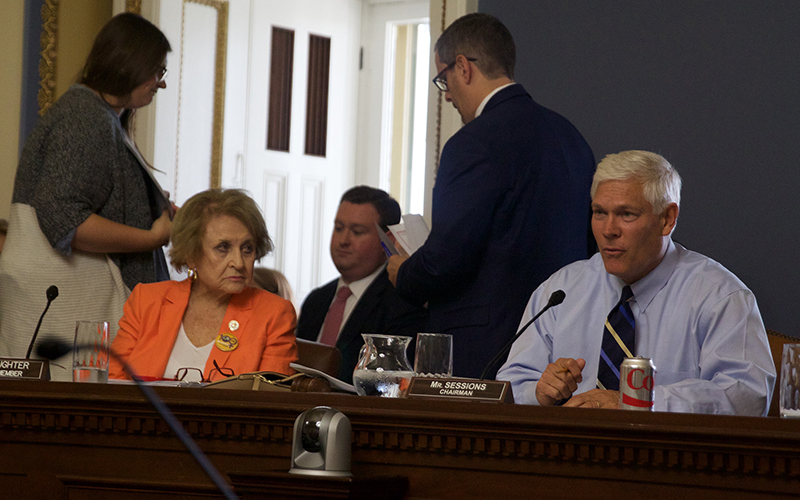 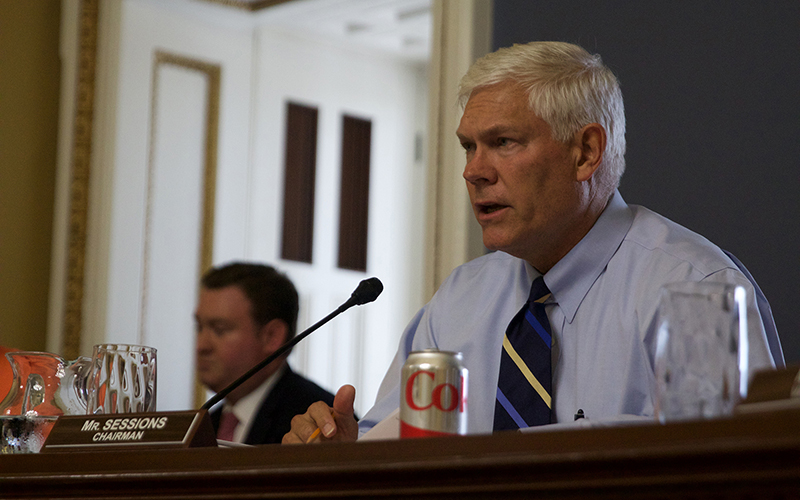 Rep. Pete Sessions, R-Texas, said the border wall funding language is needed so border agencies can have a wall “that allows them a chance to actively enforce the laws of this country.” But Democrats note U.S. taxes would be used, not Mexican money as the president promised. (Photo by Megan Janetsky/Cronkite News)

WASHINGTON – Democrats are blasting a GOP plan to allocate $1.57 billion to begin construction of a border wall with Mexico, by slipping that language into a critical defense funding bill.

But there appears to be little else Democrats can do to stop the funding language, which was debated as part of a marathon House Rules Committee meeting Monday night that was considering more than 100 proposed amendments to the bill.

The bill, which funds things like veterans affairs and military construction, is expected to come to the House floor this week where it is almost certain to pass. Under rules set for debate on the bill, it will be impossible for opponents to strip out the border wall language in the full House.

That brought an onslaught of opposition by Democrats in and out of the committee, who called for a yes-or-no vote on the amendment on the House floor.

“This is a rigged process,” said Rep. Jim McGovern, D-Massachusetts, a member of the Rules Committee. “The House of Representatives is supposed to be a place where people deliberate. This is an intentional maneuver to basically protect some members on your side to yes-or-no vote.”

Republicans on the committee argued that Americans essentially voted for a wall when they voted President Donald Trump into office, but Democrats countered that the wall Trump promised was one that would be paid for by Mexico, not with U.S. taxpayer dollars.

Rep. Pete Sessions, R-Texas, shot back at Democrats, saying the amendment was crucial for enforcement and that Trump “personally asked for this to be put in there.” Sessions, the chairman of the Rules Committee, said it was his decision to make it a “self-executing amendment,” making it impossible to call for a separate vote on it.

“This is to allow the men and women who protect this country to put a barrier there that allows them a chance to actively enforce the laws of this country, and then to not be overrun in that process by huge numbers of people,” Sessions said.

The amendment – one of 136 sprinkled over the bill – was introduced by Rep. John Carter, R-Texas, to provide funding for Customs and Border Protection for the “procurement, construction and improvements” of the border wall.

While none of the money would go to construction of border walls in Arizona, it would get the ball rolling on Trump’s long-touted campaign promise – and it was hotly debated by Arizona lawmakers even before the Rules Committee meeting.

The plan was attacked earlier in the day by Rep. Ruben Gallego, D-Phoenix, as a “deceptive, legislative gimmick in order to avoid a clean up-or-down vote.”

“Members of Congress who care deeply about our national defense should not have to decide between voting for this nonsensical proposal and voting to fund our military,” Gallego said in a conference call Monday.

But Rep. Paul Gosar, R-Prescott, welcomed the language, calling it “the start of a long overdue project to secure our borders from criminals, drug traffickers, sex offenders and terrorists.”

“No country should have open borders, and we must get back to focusing on controlled, vetted legal immigration, not law breaking, cheating and crime,” Gosar said in an email statement Monday.

This was not the first time House Democrats and Republicans clashed over wall funding.

Last week, Gallego launched into an impassioned floor speech in the House after the Rules Committee rejected his amendment to another defense funding bill that would have prohibited Pentagon funds from being used on the wall.

“Republicans are embarrassed about this law,” Gallego said of the latest measure. “They are not proud that they are going to waste money on something that is so dumb that they’re afraid to vote up or down on it, but, at the same time, they need to appease Trump’s ego by wasting away $1.6 billion.”