Sen. Jeff Flake, R-Arizona, backed by Cuban business owners, said that the most effective way for the United States to bring about change in Cuba is to work to increase, not restrict, American travel to and trade with the island. (Photo by Ben Moffat/Cronkite News) 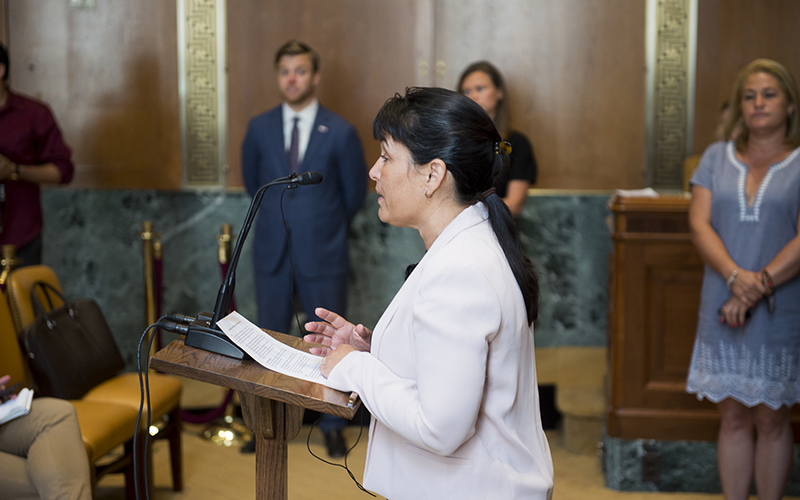 Julia de la Rosa, who owns a bed-and-breakfast in Havana, speaks at a Capitol Hill news conference where U.S. senators called for a loosening of decades-long restrictions on trade and travel between the U.S. and Cuba. (Photo by Ben Moffat/Cronkite News) 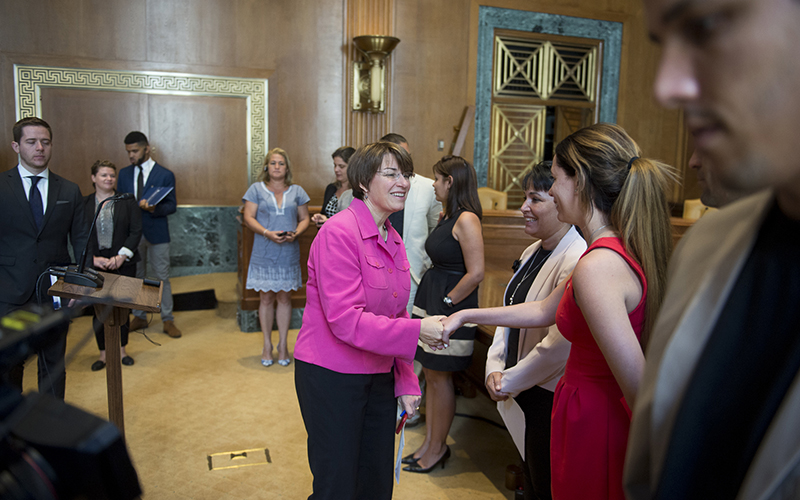 Sen. Amy Klobuchar, D-Minnesota, greets Cuban business owners. Klobuchar is one of 55 senators backing a bill to ease trade restrictions with Cuba, a move they believe would lead to social and political change on the island. (Photo by Ben Moffat/Cronkite News) 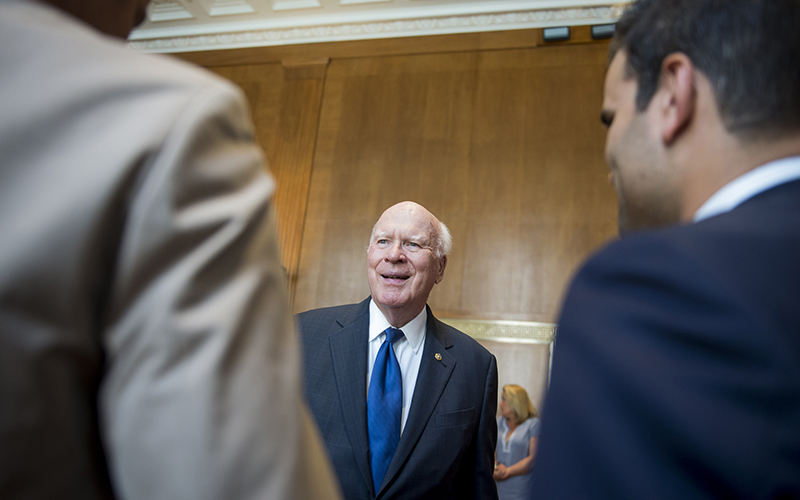 WASHINGTON – Cuban business owners were in Washington Tuesday with a message for U.S. officials – if you want freedom on the island, trade freely with its people.

The merchants were here at the invitation of U.S. lawmakers, including Arizona Sen. Jeff Flake, who met the business owners in Cuba, before President Donald Trump scaled back trade and travel liberalization policies that had been put in place by President Barack Obama in 2014.

Trump said his restrictions were aimed at making sure the Cuban military did not benefit from more open trade, but the merchants and the senators took different stance.

After Trump’s action, “we have been losing a lot of clients, so I think I am about to lose my business,” said Julia de la Rosa, who owns a Havana bed and breakfast. “I’m so concerned.”

“So many families depend on our jobs, and depend on the increasing of relationships with U.S.,” she continued. “So my clear message is: If they really want to support Cuban people or Cuban entrepreneurs, they need to encourage U.S. to have foreign trade with Cuba because we need to have access to all the goods to develop our activities.”

Flake, a longtime supporter of better relations with Cuba, said the limits amount to a “travel ban … not on Cubans, it’s on Americans.”

But Trump told a crowd in Miami last month that he was “canceling” the deal Obama struck, which he called “completely one-sided.”

“Our policy will seek a much better deal for the Cuban people and for the United States of America,” Trump said.

Among the new regulations was a promise to enforce the existing embargo and travel restrictions until the Cuban government releases all its political prisoners, recognizes freedom of speech and assembly, and schedules open elections.

“The profits from investment and tourism flow directly to the military,” Trump said in his Miami speech. “The regime takes the money and owns the industry. The outcome of the last administration’s executive action has been only more repression and a move to crush the peaceful, democratic movement.”

But Flake said he’s seen the positive effects of normalization firsthand. In his travels to the island with Sen. Patrick Leahy, D-Vermont, Flake said that “a lot has changed in Cuba over the past five years, in particular, with the Cuban entrepreneurs.

“This is the untold story, really, of what’s happened in Cuba, and it’s because American travel has increased, both among Cuban-Americans and ordinary Americans,” Flake said.

The entrepreneurs – who included a restaurateur, an event planner, an auto mechanic and other business owners – released a letter that called on Secretary of State Rex Tillerson, Treasury Secretary Steven Mnuchin and Commerce Secretary Wilbur Ross to ease restrictions on Cubans who want to access remittances and to open U.S. bank accounts. They also called for an end to restrictions on Americans’ travel to Cuba.

De la Rosa said business at La Rosa de Ortega, her bed-and-breakfast, exploded after Obama and Cuban President Raul Castro began the process of normalizing relations in 2014. The increase in foreign tourism allowed her to grow from just a couple rooms to 10.

“For us, it was incredible two years ago, when former President Obama opened relationships,” she said. “We really saw there was an incredible opportunity for us to grow up.”

De la Rosa, who has owned her bed-and-breakfast for 22 years, has recently been able to expand into other businesses, like city tours and taxi services.

But if restrictions are reinstated, de la Rosa said her business could fail.

“If they really cut off the travelers coming into Cuba – and people (are) getting so afraid about consequences – we really will collapse,” de la Rosa said. “We are going to lose our business.”

Flake and Leahy sponsored a bill in May that would completely lift the restrictions on Americans’ travel to Cuba that were first put in place after Cuba turned to communism and aligned with the Soviet Union during the Cold War.

The bill has 53 co-sponsors, nine of whom are Republicans. In a statement released in response to Trump’s Miami speech last month, Flake said he is “convinced (the bill) would pass the Senate with upwards of 70 votes.”