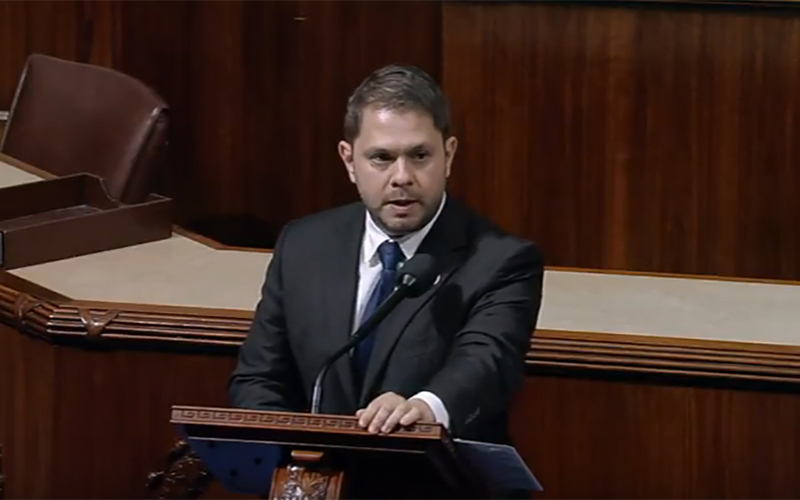 Rep. Ruben Gallego, D-Phoenix, took to the floor of the House to complain about a GOP “sneaky gimmick” to remove his amendment to the defense budget bill that would have prohibited using Pentagon funds on a border wall. (Photo courtesy Rep. Ruben Gallego’s office)

WASHINGTON – The 2018 defense spending bill that is expected to come up for a House vote Friday will not have language that would have prevented Pentagon funds from being used to build a border wall.

That amendment to the National Defense Authorization Act was made in committee by Rep. Ruben Gallego, D-Phoenix, but essentially stripped out by the Republican-controlled Rules Committee on Tuesday.

Under a little-used procedure called a “self-executing” amendment, Gallego’s amendment and some others will be stripped from the final bill on House passage.

“Republicans are resorting to deceptive legislative tactics to do Trump’s bidding just for his small, fragile ego,” Gallego said

But Republican leaders of both the Rules and the House Armed Services committees said the amendment was not appropriate for the defense spending bill, noting that the Pentagon has nothing to do with the proposed border wall.

The Defense Department agrees. A spokesman in the Defense Press Operations Office said Thursday that the Pentagon does not have authorization to fund the border wall, and has not been asked to do so by anyone.

Then-candidate Trump campaigned on a pledge to build a border wall between the U.S. and Mexico, with chants of “build that wall!” permeating campaign rallies and speeches. He vowed to make Mexico pay for the wall that his campaign predicted would cost $12 billion.

As president, he has not backed off that pledge, even after the Department of Homeland Security estimated the price tag for the wall would be $21.6 billion.

Gallego’s amendment was the 436th of 440 proposed for the 1,064-page defense spending bill. It was approved unanimously in the House Armed Services Committee markup of the bill last month, despite a complaint from committee Chairman Mac Thornberry, R-Texas, that “nothing in this bill … has anything to do with a wall on the border,” according to a report in The Hill newspaper.

The same concerns were raised by Rules Committee Chairman Rep. Pete Sessions, R-Texas, who said he did not think the Pentagon holds the “authority, responsibility or jurisdiction to build or not build the wall,” according to the Hill report. The Rules Committee vote to strip the language was 8-4, strictly along party lines.

Gallego, a Marine veteran, took issue with how the amendment was pulled, saying it came late at night without anyone watching in “typical Republican fashion.”

Rep. Martha McSally, R-Tucson, and Arizona Republican Sen. John McCain, the only other veterans in the state’s congressional delegation, did not immediately return a request for comment on the amendment.

But Gallego said on the House floor that as Mexico has refused to fund the border wall, the president will grow more desperate and seek to siphon funds from other departments. He said his amendment sought to make sure the Pentagon was not one of those departments.

“We must not allow precious resources to be robbed from our troops simply to score political points,” Gallego said.