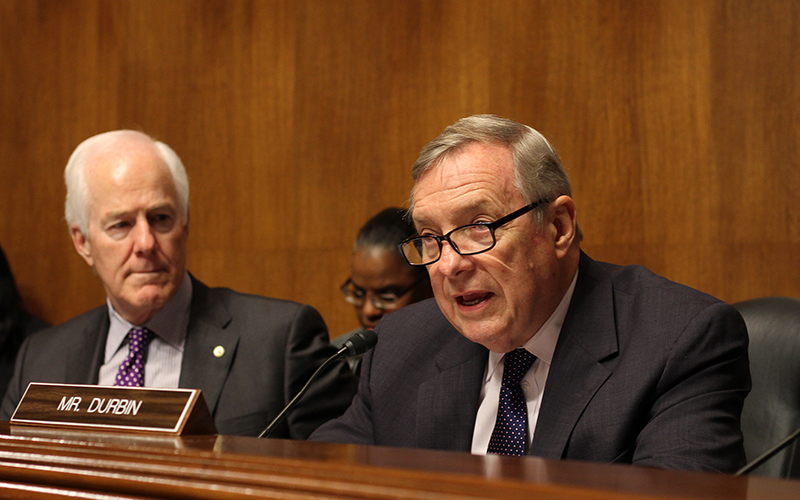 Sens. John Cornyn, R-Texas, right and Dick Durbin, D-Illinois, expressed concerns over gaps in Homeland Security’s count of people who overstay visas in the U.S., with Durbin asking if a ‘big, beautiful wall’ on the border will do any good. (Photo by Megan Janetsky/Cronkite News) 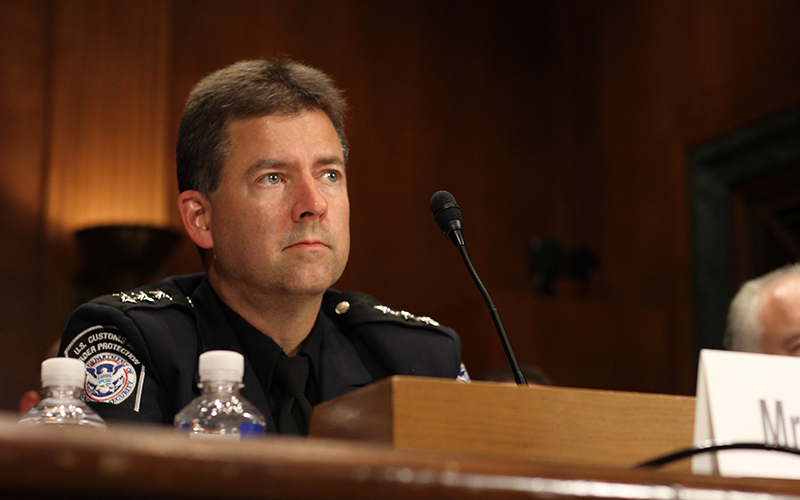 John Wagner, a deputy executive assistant commissioner of Customs and Border Protection, was one of several Homeland Security officials who told a Senate panel that progress is being made on reducing visa overstays but that much still needs to be done. (Photo by Megan Janetsky/Cronkite News) 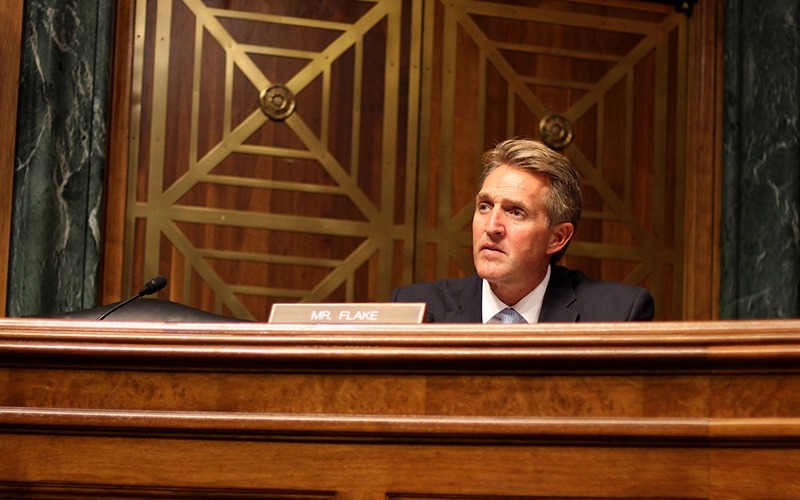 Sen. Jeff Flake, R-Arizona, chided Homeland Security officials for delays in implementing the use of biometric technology, something Congress has been pushing for years, as a way to cut down on people who overstay their visas. (Photo by Megan Janetsky/Cronkite News)

WASHINGTON – Current data on visa overstayers in the U.S. have “gaping holes” that need to be filled, frustrated lawmakers told Department of Homeland Security officials at a Senate hearing Wednesday.

The hearing before the Senate Judiciary Subcommittee on Border Security and Immigration followed a May report in which DHS officials said that 629,000 people had overstayed their visas and remained in the country at the end of fiscal 2016.

But that data only included people who came here through sea- and airports and did not account for the millions of people who pass through border ports of entry each year.

“I appreciate the good work you are trying to do and the good news in terms of airports and seaports, but to me that sounds like a huge gaping hole in our data,” said Sen. John Cornyn, R-Texas, the subcommittee chairman.

Witnesses – who included officials from DHS, Customs and Border Protection, and Immigration and Customs Enforcement – said one way they hope to close that gap is by expanding the use of biometric checks of visa holders as they enter and exit the country.

“DHS has to implement the biometric exits to increase the quality and availability of the overstay data,” said Michael Dougherty, assistant secretary for border, immigration and trade in Homeland Security’s Office of Strategy, Policy and Plans.

But the department has been working for years on developing and installing technology that will let it use of biometric data – like fingerprints and facial recognition – to check visa holders as they come in and go out of the country. The delay was highlighted by lawmakers, who have been pushing the department for years to deploy the technology.

“It’s been a problem for a while,” Sen. Jeff Flake, R-Arizona, said after the hearing. “Particularly with biometric entry-exit. We’ve called on (them), it’s been in legislation in years past – in decades past – to get this up to speed and it’s still not yet.”

Currently, the U.S. collects biometric data at air- and seaports but often don’t use it for travelers as they leave the country, relying instead on “biographic” data, like information from airline manifests.

“We have better information from those coming in but we don?t have a good way to track those going out,” Flake said. “We’re getting better but we still have a long way to go.”

In January, President Donald Trump issued an executive order calling for an “expedited completion of the biometric entry-exit tracking system.” In their testimony to the committee, the DHS officials said their agencies are “aggressively moving forward in developing a comprehensive biometric exit system, in the land, air and sea environments,” but conceded that “considerable work remains.”

Despite the gaps in the data, the agency officials said the 628,799 visa overstayers that were reported at the end of fiscal 2016 had fallen to 425,495 people by July 1, “due to continuing departures and changes in nonimmigrant status,” among other factors. That meant that 99.16 percent of the more than 50.4 million people who entered the U.S. on visas in fiscal 2016 have left, “and that number continues to grow,” they said in their prepared testimony.

That did not appear to impress Sen. Chuck Grassley, R-Iowa, who cited a statistic from January when the number of fiscal 2016 overstayers had fallen to 544,676, “an overstay rate of ‘just’ 1.07 percent.”

“Let me put that in perspective for you,” said Grassley in his opening statement, who proceeded to list 16 U.S. cities with populations smaller than the number of overstayers reported in January, including Tucson, Minneapolis, New Orleans and Sacramento.

The gaps in data also sparked criticism other from other senators, who noted that the billions of dollars Trump has proposed spending on a wall along the southern border would be better spent on data collection and a crackdown on visa overstayers.

“What this tells us is that this obsession with building a ‘big, beautiful wall’ won’t come close to solving our immigration challenges,” said Sen. Dick Durbin, D-Illinois. “It doesn’t even address the issue of overstays.”