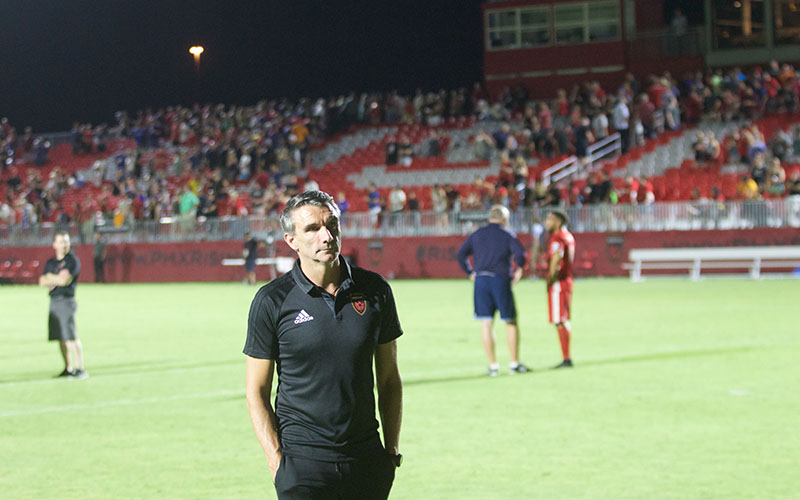 Patrice Carteron looks on after leading Phoenix Rising FC to a 2-1 win over Vancouver Whitecaps FC 2 in his Rising debut on June 10, 2017. (Photo by John Arlia/Cronkite News)

When Patrice Carteron vacationed in Arizona this spring, his plan was to relax and visit with Chelsea soccer legend and Phoenix Rising player-owner Didier Drogba. Nothing more, nothing less.

Little did Carteron know that his initial visit to the Valley would see him return in June as the team’s new coach. That journey would reflect a career path that has made several stops off the beaten path.

Carteron replaced Frank Yallop, who unexpectedly resigned four games into the season to spend more time with his family in California.

“After Frank left, we were kind of left with this void,” midfielder Matt Watson said.

After initially speaking with Drogba about the Rising, their long-term goal of bringing Major League Soccer to the Valley and their vacant head coaching position, Carteron met with the rest of the Rising board and was eventually offered the job.

Just like that, Carteron and Drogba were together again.

“I’ve known him for a long time now because his personal physio is my best friend,” Carteron said.

The duo also share an upbringing in French football and played against each other in a late-December 2001 showdown between Drogba’s Le Mans FC and Carteron’s AS Saint-Etienne in France’s Ligue 2.

“It was a very bad day. I don’t want to remember about this,” Carteron said. “We lost 3-0 and he scored two goals. We had some holidays after and they were very bad holidays because of him.”

While Carteron’s journey to the Rising’s top job may seem unorthodox, it reflects a unique coaching path.

After staying close to his native France during his 16-year playing career, which featured a stint with Olympique Lyonnais and a memorable matchup with the great Brazilian striker Ronaldo in the UEFA Champions League, Carteron transitioned to management and brought the leadership qualities he learned as a player, and often team captain, with him.

His coaching career began in 2007 where his playing career ended, at AS Cannes, a club in the south of France that is famous for its youth development academy and has produced the likes of French legends Patrick Vieira and Zinedine Zidane.

Since then, the 46-year-old made another stop in France before venturing to Mali, the Democratic Republic of the Congo, Egypt, and Saudi Arabia before coming to the United States.

“Every time, it’s a human challenge for me to think and to try, no matter the culture, no matter how difficult it is, to find a way to get results,” Carteron said.

For the most part, Carteron has achieved those results everywhere his managerial career has taken him.

In 2010-11, he led Dijon FCO to a third-place finish in France’s second division, earning the team promotion to Ligue 1. After getting relegated the following season, Carteron took control of the Mali National Team and led it to a third place finish at the 2013 African Cup of Nations, reaching 21st position in the FIFA rankings in the process. During a two-and-a-half year stint at Congolese side TP Mazembe, Carteron added two league titles and a 2015 African Champions League title to his trophy cabinet.

After short but successful stints in Egypt and Saudi Arabia, Carteron has started to continue that trend at Phoenix Rising. As his first month at the helm nears a close, he has yet to lose a game in USL play (1-0-3) and has brought stability to a team that was originally rattled by Yallop’s resignation.

“Obviously Rick took over, but we knew there was another coach coming,” Watson said. “It was like a downtime in the season for us and things didn’t go great there. Obviously we did our best, but I feel like we found it difficult knowing that someone else was coming.”

It wasn’t an easy situation for anyone, including Rick Schantz, who served as interim coach and has since returned to his role as an assistant. For a few weeks after Carteron was hired, Schantz was coaching games and leading training under the direction of Carteron, who was still in Saudi Arabia finishing out his contract with Al Nassr. Now that the two are working together in person, things have started to click.

“Any time you have a new coach, I would almost say it’s like dating,” Schantz said. “You have to get to know one another. Communication is always super important and Patrice has been fantastic. He’s in early, he stays late and we spend a lot of time talking about the team, about soccer, about family and things like that.”

Communication from the coaching staff to the players has also improved since Carteron’s arrival put an end to the managerial game of telephone. His presence has also given him the ability to change things in-game, rather than retroactively after watching film.

“I think he makes it crystal clear exactly what he wants from you and he expects you to do it,” Watson said. “If there are issues, he adapts and we change on the fly. In the game against Swope Park, things just weren’t working early and he identified the problem, we switched our formation and made our game a lot easier.”

Another way Carteron has made the game easier for his players is by bringing a game-day intensity to the training pitch. Every drill is done at game speed, even if it’s for shorter periods of time.

“I think it helps in the game,” Watson said. “Training intensely carries onto the field and I think you’ll see the benefits of that as we go forward.”

The results are starting to show. After failing to keep a shutout in their first 12 USL games this season, the Rising finally held fourth-place Reno 1868 FC to a 0-0 away draw on June 30th.

“Patrice’s focus has been defending and making sure that we limit the opportunities for the opponents and we’ve been doing so,” Schantz said.

As a right-back in his playing days, Carteron has been happy to see a defensive improvement within the team, but acknowledged that the Rising, which sit in 10th place in the USL’s Western Conference, still have to make strides to achieve their goals.

“My responsibility right now is that we have better results than we’ve had from the start of the season,” Carteron said. “I will be really proud if Phoenix Rising, for the first time, reaches the playoffs this season. That would be a good first step.”