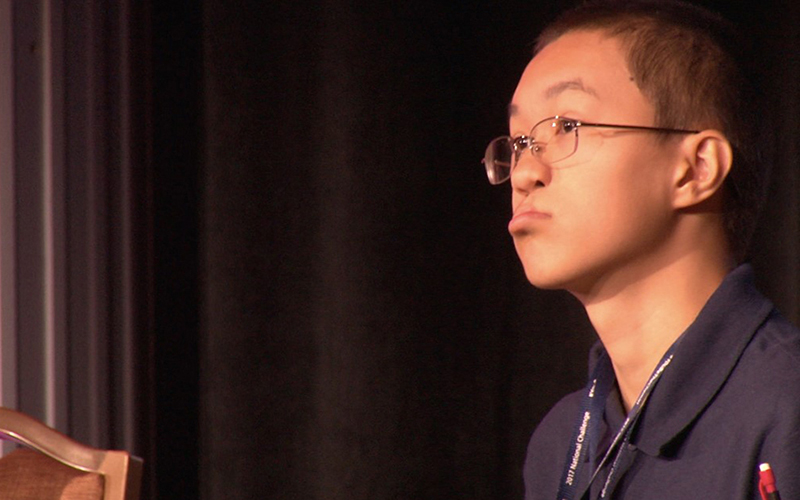 Isaiah Hazelwood, 13, a Basis Scottsdale eighth-grader, said he enjoys chemistry because it “just tells us so much about how the world works and how we work.” (Photo by Emma Lockhart/Cronkite News) 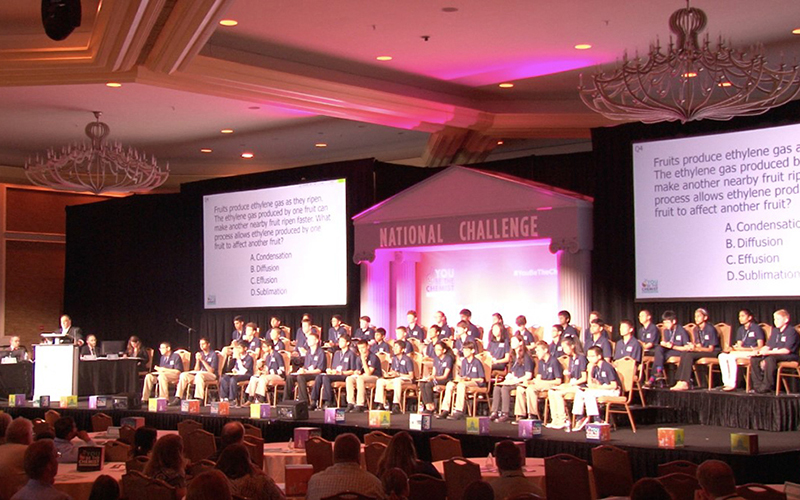 Students from around the country took the stage in a Washington hotel this week for for rhe first round of the “You be the Chemist” natoinal chemistry competition. (Photo by Emma Lockhart/Cronkite News) 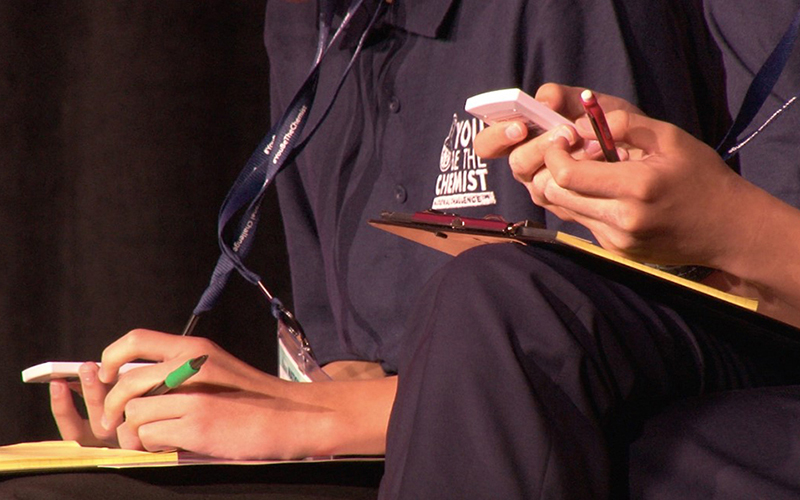 Traditional scholastic contests like spelling bees make students face a question alone on stage, but kids in the chemistry competition all got the same questions and answered electronically. (Photo by Emma Lockhart/Cronkite News)

WASHINGTON – You might not know which chemical element in the Hope Diamond has the largest molecular mass, but an eighth-grader from Scottsdale does.

Isaiah Hazelwood faced that and other questions faced earlier this week when he squared off against other middle school students from around the country as part of the “You be the Chemist” National Challenge in Washington.

The lanky 13-year-old who’s in the eighth grade at Basis Scottsdale won the state competition in February to advance to the nationals on Monday, competing against 41 other students representing 39 states, Puerto Rico and the District of Columbia.

The competition drew a total of 55,000 students at the local and state levels, according to a prepared statement from Dwayne Sattler, executive director of the Chemical Education Foundation, which sponsored the contest.

“Students like Isaiah, who are excited about particular subject areas, certainly dive a little bit deeper and our teachers help work with them to foster that excitement,” Basis Scottsdale Principal Kristen Jordison said by phone this week.

Between rounds, Isaiah spoke quietly and looked away during interviews – until the conversation turned to chemistry. Then, he lit up.

“I’m excited about chemistry because it just tells us so much about how the world works and how we work,” Isaiah said Monday.

The competition, sponsored by the Chemical Educational Foundation, featured four rounds of competition, with students eliminated in each round.

But unlike the more familiar spelling and geography bees, where individual students face the glare of the spotlight as they try to answer a question, the chemistry students remain seated on stage where they all saw the same question at once. Giant screens projected timed multiple-choice questions that the students answered using individual clickers.

All 42 students started in the first, preliminary round in a Washington hotel ballroom with the students in seated rows on the stage as educators, organizers, sponsors and others watched from round tables in the audience.

“I’m excited about the having completed the preliminary rounds however the questions are a bit harder than I expected,” Isaiah said after one of the early rounds. “I’m not all that certain I’ll get into a top four spot.”

The questions, some of which were at the level of an AP class, were a challenge even for some teachers.

“They are tough questions,” said Kaitlyn Mandigo, a BASIS Scottsdale chemistry teacher who was in Washington for the competition. “As a person with a chemistry degree, there were some that I really had to pause and think about.”

Isaiah was able to survive and advance to the second round with 14 other students but did not make the next cut, down to four finalists.

Miss USA Kara McCullough, who has a bachelor’s degree in chemistry, spoke at the event and awarded the winning prize – which included a calculator as well as a trophy – to eventual champion, Anantahn Sadagopan, 13, from Massachusetts. He also won a $12,000 scholarship.

But for Isaiah, there was more to the trip than winning. And chemistry, surprisingly.