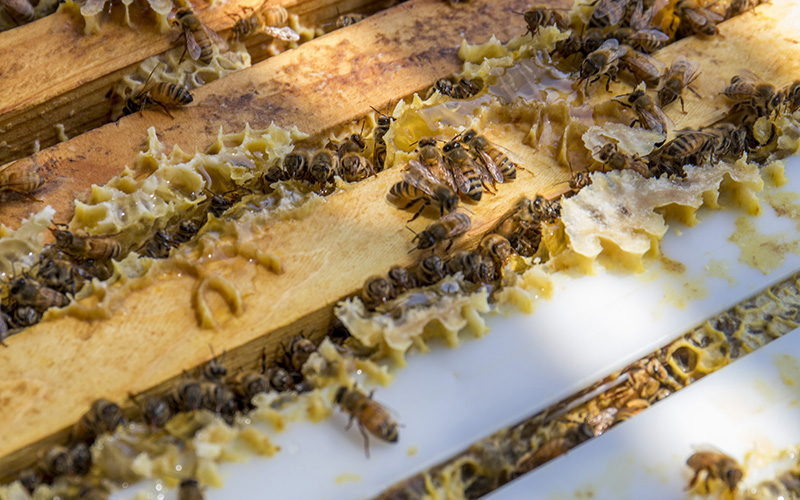 At the bee annex on Arizona State University’s Polytechnic campus, the honey bees are not monitored or tagged. They are free to roam the skies. This can leave them vulnerable to contamination from nearby farming activities. (Photo by Nicole Tyau/News21) 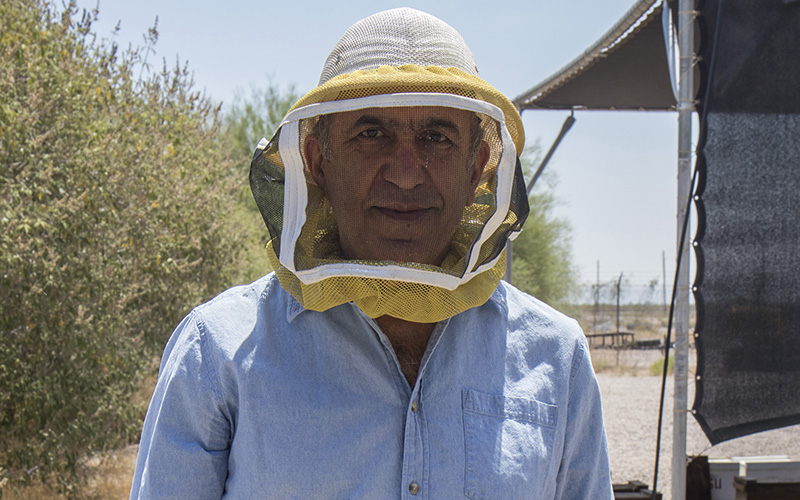 Osman Kaftanoglu, the project manager of the Honey Bee Research Lab at Arizona State University, wears a mesh helmet for safety. In his left hand, he holds a smoker that sedates bees as he works with them. In his right hand, he carries a tool that pries the hives open. (Photo by Nicole Tyau/News21) 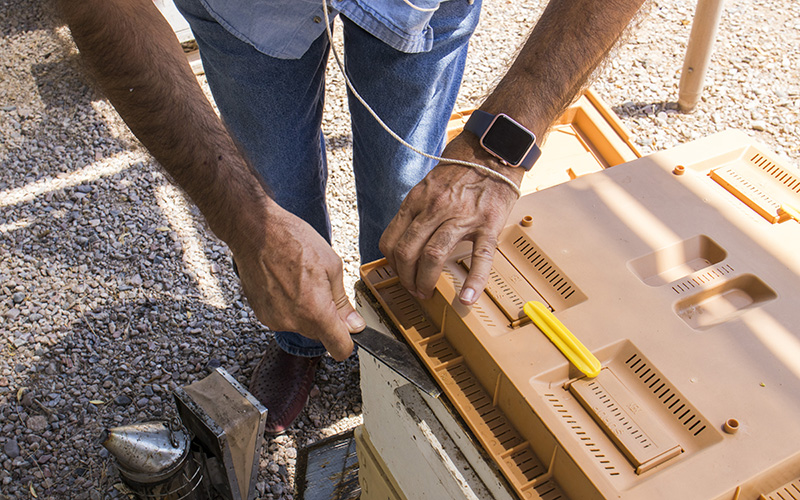 Researchers at Arizona State University’s bee annex house bee hives in boxes so they can monitor the health of the colony. (Photo by Nicole Tyau/News21)

These hives at Arizona State University are artificial honeycomb frames that withstand the Arizona heat better than natural beeswax. (Photo by Nicole Tyau/News21)

Farmers struggle to pollinate their crops with this limited bee supply. For context, every two acres of almond farms requires one hive for proper pollination, and almond growers in California’s Central Valley rent about 1.7 million hives for the brief almond blossoming season every year, according to Gene Brandi, president of the American Beekeeping Federation.

Researchers attribute the decrease in bee population to colony collapse disorder, and a Canadian study identified pesticide-polluted puddles as a potential cause. Systemic pesticides stay in the soil for months, contaminating the bees’ water supply.

“Bees need water, especially in Arizona,” said Kaftanoglu, project manager of ASU’s Honey Bee Research Lab. “If there is no water … the temperature gets very hot, and honey will melt, beeswax will melt and the colony will collapse.”

Bees manage their ideal hive temperature of about 90 degrees Fahrenheit by bringing water they collected back to the hive, where in-hive bees will evaporate it by fanning their wings.

In Arizona, water is crucial to a hive’s maintenance in the summer.

If a bee travels outside the hive, collects contaminated water and finds its way home – which it may not since pesticide exposure impairs bees’ ability to orient themselves – the polluted water will reduce the lifespan of the rest of the bees. Their lifespans are already very short, Kaftanoglu said, and reducing it may affect the survival of the colony.

“The colonies cannot develop, and there will not be enough population to maintain the temperature in the hive and to take care of, to brood in the hive,” Kaftanoglu said. “The colonies will be weak.”

Kaftanoglu said though there are other pollinators in the United States, they cannot fill the role that honey bees play in pollination.

“Honey bees are the only insects that can be managed, and we can transport the bees from one place to another,” Kaftanoglu said. “There are no other insects that can do the job as well as honey bees.”