Supporters of DACA and DAPA protested outside the Supreme Court last spring as the court considered a challenge by 26 states, including Arizona, to the programs. The high court eventually let stand lower court rulings blocking the programs. (Photo by Madison Alder/Cronkite News) 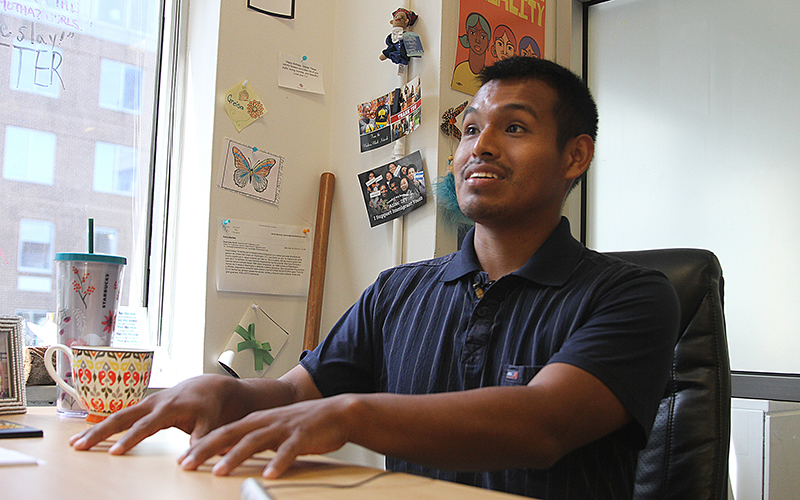 Luis Condorimay, a Deferred Action for Childhood Arrivals recipient, discusses his fears for his family – and his own future – after the Department of Homeland Security rescinded a program that could have protected parents from deportation. (Photo by Megan Janetsky/Cronkite News)

WASHINGTON – Buried in a Homeland Security memo last week that canceled a program to protect undocumented immigrant parents from deportation was a single line saying the Deferred Action for Childhood Arrivals program “will remain in effect.”

The line may have raised hopes among the 800,000 DACA recipients in the country – 28,000 in Arizona – that the program that then-candidate Donald Trump promised to do away with had survived.

But Department of Homeland Security officials said this week that eliminating DACA is still a very real possibility.

“The fact that DACA was not rescinded by the same memo should not be interpreted as bearing any relevance on the long-term future of that program,” DHS spokeswoman Jenny Burke said in an email Monday. “The future of the DACA program continues to be under review with the administration.”

“The uncertainty is still there,” said Hernandez, 20. “So when this happens, where they’re actually talking about DAPA, something that’s very close, very similar to DACA, it leaves us wondering, ‘Are we next?'”

For the moment, the DHS announcement will have little practical impact. The Deferred Action for Parents of Americans and Lawful Permanent Residents – DAPA – was unveiled by President Barack Obama in 2014, along with an expansion of DACA, but both programs were blocked by courts and eventually overturned.

That left only the original DACA program, created in 2012, which protected “Dreamers” – undocumented immigrants who were brought to the U.S. as children – by deferring their deportations and giving them the ability to work and study if they met certain criteria. The deferrals are good for two years and can be renewed.

Mo Goldman, a Tucson immigration lawyer, noted the memo rescinding DAPA was released on the fifth anniversary of the original DACA program, what he called a “symbolic and mean-spirited move by the administration.”

But some say the administration has not gone far enough.

“He has not fulfilled a campaign pledge,” said Ira Mehlman, a spokesman for the conservative Federation for American Immigration Reform. “In our view, DACA was as unconstitutional as the programs that were struck down by the courts, it’s just that nobody ever challenged them.”

Mehlman said that programs like DACA and DAPA encourage people to immigrate illegally to the United States seeking those protections.

“President Obama never had the authority to declare an entire class of people off limits to enforcement,” he said.

Goldman said the timing of the administration’s announcement “sent out a warning shot to immigrants across this country that right now is not a safe time for them.” A warning shot that he said was heard by immigrants who are more reluctant to file for DACA than they were before.

“Even the act of rescinding DAPA gives people some pause on whether they should continue and file for DACA if it’s their first time to do it,” he said.

Hernandez said it was already difficult for undocumented immigrants to register for DACA, worried that “coming out” to the federal government would mean putting family members in danger of deportation. Those fears are heightened now, he said.

“There is some fear that if I give all my documents, where I live, where I work, my phone number to the federal government, a government right now that’s against me, it will be uncertain for me,” said Hernandez, whose family came here legally in 2005 but overstayed their visas.

Luis Condorimay, a DACA recipient who crossed the Arizona border in 2005, said before it was struck down by the courts, DAPA acted as a sort of beacon of hope for him and his undocumented parents, who he fears will be deported under the Trump administration.

“That was really a hope for my parents to get out of the shadows,” he said. “To get a work permit and to at least have a hope not to be deported any time soon.”

Condorimay, 26, now a community organizer for United We Dream, said many undocumented immigrants like him are “really trying our best to be good citizens.”

Condorimay, who recently graduated with a bachelors degree in chemical engineering after seven years in college, said he would not know what his options would be if DACA were repealed.

“Now that Trump is the president,” he said. “Our goal is basically just to keep DACA, keep what we earned and make sure we try as best as we can to protect our parents.”

Despite the concerns, Hernandez encouraged DACA-eligible immigrants not to shy away from the program.

“At the end of the day, the program is there, we need to take advantage of the DACA program,” he said. “We need to show by applying that the program is needed by immigrants.”