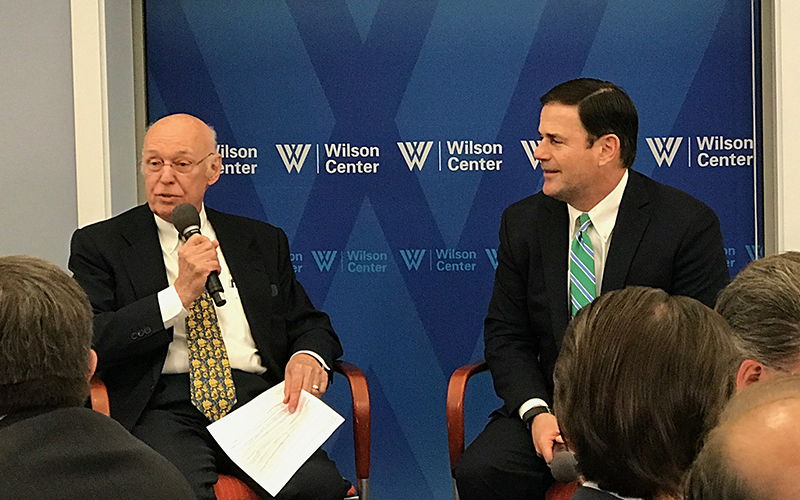 WASHINGTON – Arizona Gov. Doug Ducey told a U.S.-Mexico diplomacy conference Wednesday that maintaining good trade between the countries is important, and he expects the state to have a “seat at the table” in any upcoming trade negotiations.

Ducey’s comments, to a conference of business and community leaders from both sides of the border, come a month after President Donald Trump notified Congress of his plans to renegotiate the North American Free Trade Act.

Trump has called NAFTA “the worst trade deal ever” and pledged to rework it to get higher-paying jobs for American workers and more economic growth for the nation.

Ducey and other Republican lawmakers in Arizona have praised the deal, which they said has brought billions in new trade to the U.S. While he backs “free and fair trade,” however, Ducey said he is not opposed to a version 2.0 if the pact can be improved.

“The world has changed tremendously since the 1990s,” when NAFTA took effect, said Ducey, adding that he wants Arizona to take a look at the agreement to find areas where it can be modernized and improved.

But some state lawmakers say the pact has done a good job as is.

Sen. Jeff Flake, R-Arizona, tweeted that trade between the U.S. and Mexico increased from $50 billion to $500 billion – a 900 percent jump. He is running a social media campaign, #nafta4az, asking Arizonans to send him their personal stories in support of the agreement.

Sen. John McCain, R-Arizona, tweeted that withdrawing from NAFTA would be “a disaster.”

Ducey said Mexico is Arizona’s largest trading partner and he sees economic growth opportunity at the border. But he acknowledged that there are problems and political realities Arizona has to face with Mexico.

That was echoed by James Jones, a former U.S. ambassador to Mexico, who noted during Wednesday’s luncheon that relations between Arizona and Mexico were strained in recent years.

Arizona made headlines with its SB 1070 law, the harsh “papers please” immigration law aimed at cracking down on illegal immigrants. Long lines coupled with intricate inspections at ports-of-entry caused truckers to drive to California or Texas – where inspection lines were shorter – bypassing Arizona entirely.

Ducey stressed the importance of a good relationship with Mexico that he said lets both parties “communicate and put problem solvers together” to jointly address any negatives.

The governor said Slim was “pessimistic” when they first met but came around after he saw how eager Ducey, as well as business and academic communities in the state, were to work with Mexico.

“The first thing we could do was take advantage of the opportunity that we could start anew,” said Ducey.

Ducey said the willingness of Slim and Mexico to work with Arizona “opened the door wide.” After that, he said, the natural economic cycles of innovation helped bolster the border economy.

“We want to send a strong and positive message,” the governor said in 2015, while introducing Slim to a conference. “We’re open for business.”