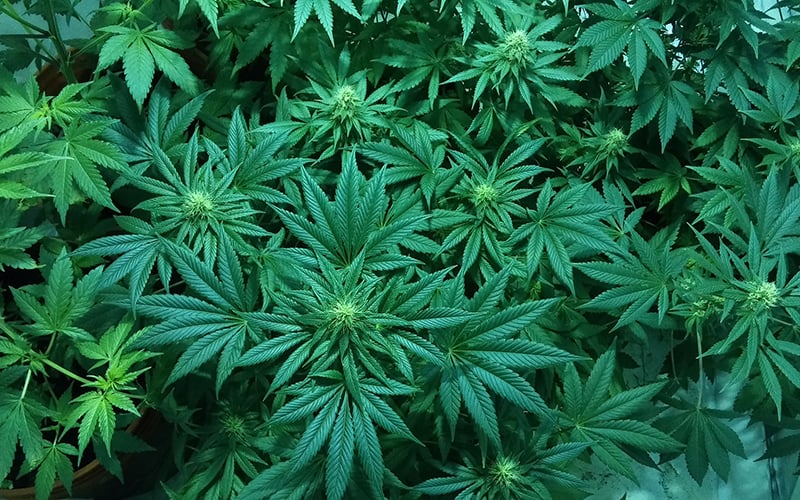 The growing medical marijuana industry has led to the openings of a variety of marijuana-related businesses in Arizona. (Photo by CMElixirs via Creative Commons)

The number of cardholder applications, including for qualifying patients, designated caregivers and dispensary agents, also has steadily increased. Nearly 98,000 people applied for cards in 2015, a 40 percent increase from the previous year, a DHS annual report shows.

The booming industry has also led to the openings of marijuana-related businesses. There’s little data on such ancillary groups but cardholders like Megan Stone and business partners Ericka Kelly and Sarina Gomez have created two innovative companies.

Stone’s own experiences as a cannabis patient inspired her. She got her medical marijuana card after moving to California from the Midwest at 23.

Stone’s first visit to a dispensary was anti-climactic.

“Everything about the experience was so dodgy and so dirty and so illegal feeling,” she said. “Nothing about it felt legal or happy or safe.”

Stone had helped pay for design school by working as a “budtender,” or product salesperson, at an Orange County dispensary. The experience ignited a passion for the plant.

“As soon as I started working in a shop it really very quickly became very important to me,” she said. “It was really nice to just finally meet a whole world of people that used cannabis the way I did.”

Stone combined her insider’s knowledge of the cannabis industry with her design chops, starting the High Road in California in 2013.

She relocated to Arizona six months later, drawn to the business opportunities in a regulated industry. She recently redesigned a Scottsdale dispensary.

“A lot of the stuff that was opening up here was really forward thinking and a really good model,” Stone said.

She said her design style is “elegantly masculine,” appealing to a male audience but “with a woman’s touch to it.”

Stone said the goal is to normalize purchasing medical-marijuana products, creating a retail experience that appeals to a variety of customers. 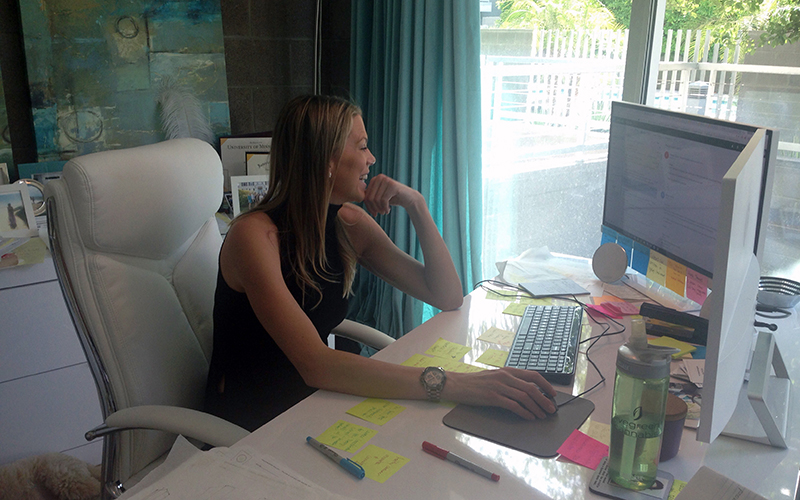 “This industry changes on a weekly basis, honestly, and people’s perceptions of it are changing all the time,” she said. “I’m glad I chose to specialize in this and focus on this niche because there’s a lot of opportunity still coming.”

They share a vision to create a safe space for men and women to heal their bodies and minds with cannabis.

“We don’t want any shaming that sometimes you need to meditate or need to medicate to get to a place of calm or peace,” Kelly said.

The two women use medical marijuana for different reasons. Kelly says it helps her migraines and high stress levels. Gomez says it helps her cope with the residual effects of her anorexia and post traumatic stress disorder.

“We both believe we are what you put in your body,” Gomez said. “I would rather put a plant in it than a pharmaceutical drug.”

Gomez and Kelly host Medicated Mavens events every two weeks. The events consist of a smoking and networking session, a sunset yoga class outdoors, educational presentations, and hanging out. Only cardholders are allowed to smoke marijuana during classes, Kelly said. 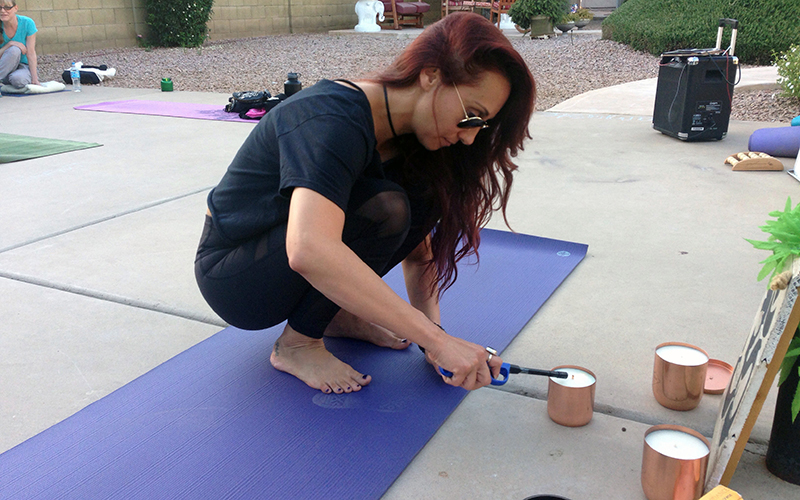 Sarina Gomez lights candles around the perimeter of an outdoor patio before a Medicated Mavens yoga and cannabis event. “We want to share to the world that there’s different ways of coping and healing, not just what the doctor says,” Gomez said. (Photo by Saundra Wilson/Cronkite News)

“We’ve found something that works for us and we’re smiling everyday and we want to share that with everyone,” Kelly said.

The women said they want to break the stereotype that people who use medical marijuana are lazy.

“I’m happy that we’re doing things like this,” said Shane Criswell, a medical-marijuana cardholder who said it was his first time at a Medicated Mavens event.

“It’s just a stress reliever for anxiety,” Criswell said, adding that he gets sore from a bad back. “It just helps take the edge off.”