President Donald Trump has called for reductions in personal and corporate tax rates as part of his sweeping budget plan. Arizona businesses generally welcomed the cuts, but noted that there’s “a long way to go” before the plan gets through Congress. (Photo by 401kCalculator.org/Creative Commons) 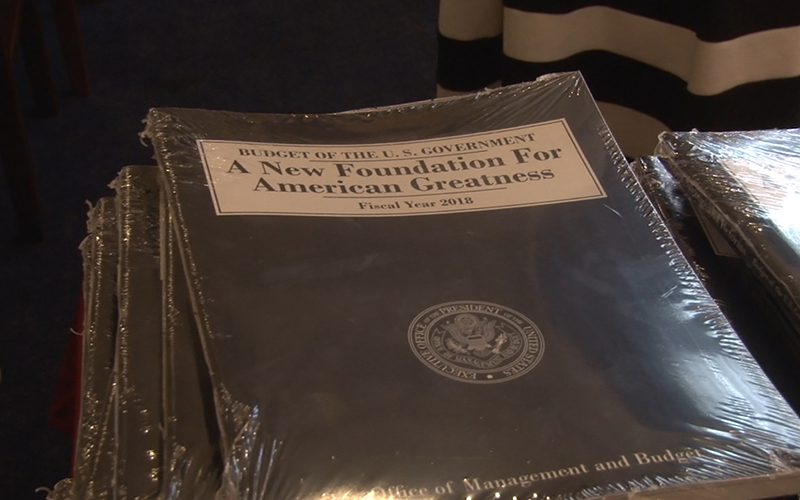 The White House said the deep cuts to taxes and spending called for in its proposed fiscal 2018 budget would be offset by the 3 percent annual growth in the economy that they would spark, but critics call that growth rate “just not plausible.” (Photo by Noelle Lilley/Cronkite News)

WASHINGTON – Arizona business leaders are cautiously optimistic about the tax reforms outlined in President Donald Trump’s fiscal 2018 budget proposal – but not so optimistic about its chances of passage as currently drafted.

The plan calls for cutting the number of income tax brackets from the current seven down to three – with 10 percent, 25 percent and 35 percent tax rates, compared to the current rates that range from 10 to 39.6 percent. The plan also proposes cutting the corporate tax rate from 35 percent to 15 percent.

“Reduction in (tax) rate and a simplicity of the code is something Arizona employers have long sought,” said Garrick Taylor, spokesman for the Arizona Chamber of Commerce.

But experts cautioned against banking too much on the president’s proposal, which faces a tough road through Congress – with one pointing to Arizona Sen. John McCain’s comment that the plan is “dead on arrival.”

The tax reform “looks good on paper,” said Jack Lunsford, president and CEO of the Arizona Small Business Association, but there is still a “long way to go” and there is “a lot of work to be done.”

That sentiment was echoed by Dennis Hoffman, director of the Seidman Research Institute at Arizona State University’s W.P. Carey School of Business.

“I don’t know of anyone in Congress who is working right now to make the president’s plan reality,” Hoffman said in an email Tuesday. “So the pace of reform may be slower than what many hope it to be.”

Hoffman said the likelihood of passage depends on “the form the legislation ultimately takes and whether Congress passes reform that will invariably grow the deficit.”

The proposed budget could cut government revenues sharply, which critics fear will only end up adding to the federal deficit. But the White House argues that that cuts will spark economic growth at a rate of 3 percent a year, which would fuel job creation and offset the revenue reductions.

But Dean Baker, co-director for the Center for Economic and Policy Research, believes that Trump’s budget plan will likely have “zero impact on growth.” Baker said that we should not rule out the possibility of 3 percent economic growth – but it will not be because of the budget plan, stating that it is “just not plausible” that the proposal could spark that level of growth.

Alan Cole, an economist with the Tax Foundation, said he thinks the greatest potential in the tax reform plan comes from the proposed reduction to the corporate tax rate. But he said that will work best if it is permanent, and he acknowledged that winning congressional approval for that large a tax reduction will be “tricky.”

“It is a very ambitious corporate rate and due to that, they probably won’t be able to pass it (permanently),” Cole said. “And it does need to be permanent.”

The chamber of commerce’s Taylor welcomed a lowering of the corporate tax rate, saying that current rate is “not a good look for the U.S.”

Lunsford expressed some concern over how the tax reform may affect the deficit, noting that if not enough revenue comes in, the federal government may have to resort to cutting programs.

Last week, Democrats pounced on the president’s proposed budget, which they said would severely impact domestic programs dealing with health, nutrition and welfare, among other programs.

And while House Republicans were generally supportive, some in the Senate expressed concerns, including McCain, who said the proposed increases in defense spending were “inadequate” to handle the military challenges the U.S. is facing.

Hoffman said it’s still too early to predict exactly what impact the plan will have on Arizona taxpayers.

“Tax reform will benefit (Arizona) if it results in faster growth in the overall economy. But that depends,” on the form reform takes, he wrote. He noted that while taxpayers might face lower tax rates, that could be offset by the loss of deductions for state income, property and other taxes.

Given its uncertain future, some business groups in Arizona were reluctant to comment on the budget plan until further details become available. Lunsford is taking a wait-and-see attitude for now.

“If I were a business in Arizona, specifically a small business, I would continue to do business as usual,” he said.