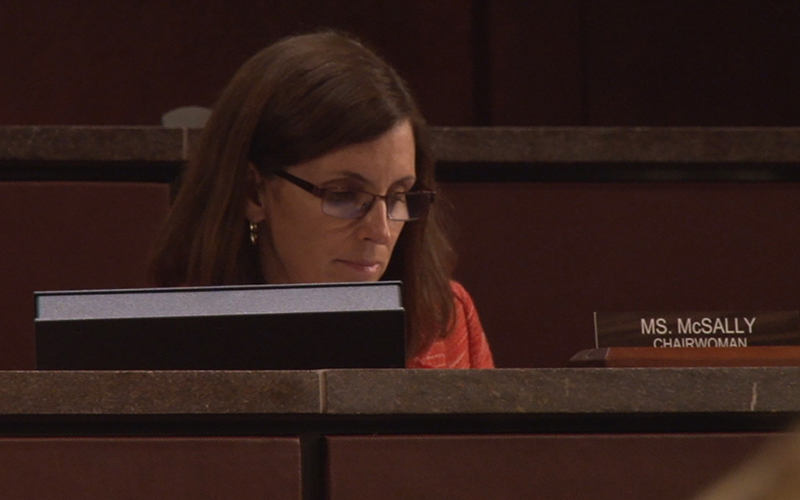 Rep. Martha McSally, R-Tucson, said the Department of Homeland Security must focus on the problem of the hundreds of thousands who overstayed their visas in the U.S. last year, but should not neglect border security to do so. (Photo by Noelle Lilley/Cronkite News)

WASHINGTON – House members called on Department of Homeland Security officials Tuesday to crack down on the “growing problem” of immigrants who overstay their visas in the U.S.

The remarks came during a House Homeland Security subcommittee hearing one day after the release of a department report that said nearly 629,000 people overstayed their visas in fiscal 2016, an issue that Rep. Martha McSally, R-Tucson, called “deeply concerning.”

“With this year’s number of border apprehensions at a record low, visa overstays are a much, much bigger problem than they have been historically,” said McSally, the chairwoman of the Border and Maritime Security Subcommittee, after the hearing.

McSally pointed to testimony by DHS officials during the hearing that the agency apprehended 310,000 people crossing the border illegally last year, half as many as the agency believes entered the country legally through air and sea ports and then stayed illegally.

But Democrats on the panel still cited the report to ask whether federal money might be better spent regulating travel visas than beefing up border enforcement, specifically to build the 2,000-mile southern border wall the President Donald Trump has called for.

The hearing came the same day that the White House released its fiscal 2018 budget proposal, which includes $2.6 billion for border security and immigration enforcement, $1.6 billion of which would be for work on a border wall.

“To keep our focus mainly on our walls is a vulnerability unto itself,” said Rep. Filemon Vela, D-Texas, during the hearing.

But McSally said the government needs to do both – increase security along the border and tighten up on those who overstay their visas.

“We still need to do more in border security, we still have cartels who are trafficking drugs, and people, and money and weapons through the communities,” McSally said. “We need a better strategy to address the border security issue, but we can do both, addressing border security and visa overstays.”

One way to do that is through the collection of biometric data – things like facial recognition software and fingerprint scans – on people who enter the country on a visa and, ideally, again when they leave to make sure no one is staying longer than they are supposed to.

John Wagner, deputy executive assistant commissioner for Customs and Border Protection, told the committee that the department is using biometrics on a limited basis, but that increasing use of the technology is an important goal, especially along the land border.

“This is just a more efficient, convenient way of traveler verification, without losing any of the security benefits,” Wagner said of the promise of biometric technology.