Ken Coughlin, who owns The Desert Bar near Parker, added a saloon, two bars, a gift shop, two stages and hundreds of solar panels to power the establishment. (Photo by Farai Bennett/Cronkite News) 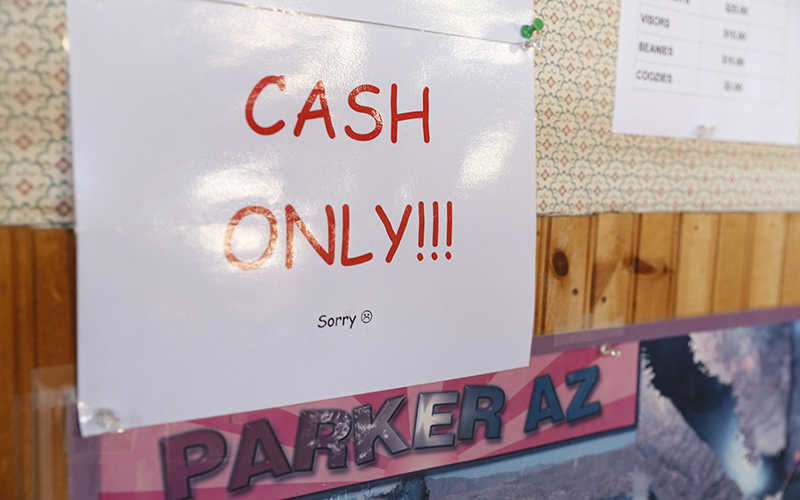 With all the advancements The Desert Bar has made over the years, the saloon near Parker still doesn’t accept credit or debit cards. (Photo by Farai Bennett/Cronkite News) 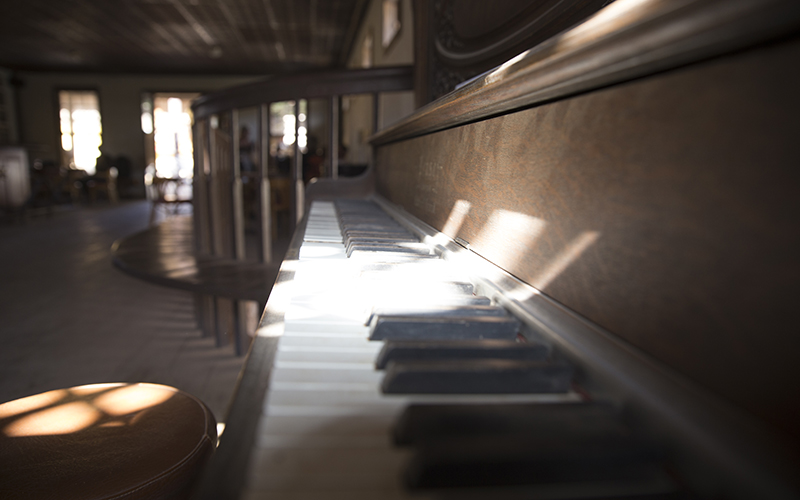 People come from all over the country to take in The Desert Bar’s unique atmosphere. The bar is nestled in the Buckskin Mountains, and the property used to be an old mining camp. (Photo by Farai Bennett/Cronkite News)

“Where else do you find a place like this?” said Jim Rapton, a local patron who’s been enjoying cold brews at this bar for more than three decades.

Rapton has essentially watched the place expand before his eyes. He recently celebrated a birthday at The Desert Bar before the bar closed for the summer.

“I come here for my friends,” he said, adding that most of the employees are neighbors. “Kenny is striving every year to improve the place and make it more of a community.” 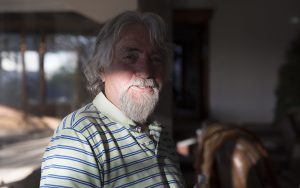 The Desert Bar owner Ken Coughlin opened a small bar in 1983, and it has grown since then. (Photo by Farai Bennett/Cronkite News)

Owner Ken Coughlin had originally planned to build his own house on the property, a former mining camp, but he decided to open a bar after he lost the lease to another establishment he had been running.

“Time went by, and I had to do something or else I would’ve lost my liquor license,” he said. “I had the land and the license and thought, ‘OK, I’ll give it a try,'” he said.

In the beginning, he relied on the desert aesthetic and the simplicity of his bar to draw people. The original structure was about 600 square feet and had no bathrooms, refrigeration or way to keep ice cool. 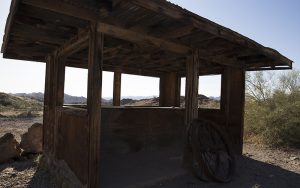 Ken Coughlin’s original structure was about 600 square feet and had no bathrooms, refrigeration or way to keep ice cool. (Photo by Farai Bennett/Cronkite News)

Eventually, Coughlin’s tiny bar grew. He added a saloon, two bars, a gift shop, two stages for live music and his biggest accomplishment: hundreds of solar power panels covering nearly all of the outside bar and patios roofs.

“Solar is something that should’ve happened in the ‘70s,” he said. “Some people want to stay in the 19th century and the 20th century, but you can make as much money making things right than doing it the wrong way.”

Coughlin said he made the same mistake. For years, he used an old-fashioned generator and realized that it wasted lots of power and cost more to maintain.

Although Coughlin said he wasn’t sure how many solar panels he has installed or how much he’s spent, he believes he’s received more value than energy produced from a generator.

Coughlin said the solar panels became a game changer for the bar because they could power air conditioning, lights and appliances.

People from all over the U.S drive out – typically in their four wheelers or ATVs – and find the same canned American beer the bar began serving in 1993, along with liquor and American-style food they now serve.

The bar can hold about 250 people, and on average, about 100 people visit every weekend, Coughlin said.

“Whether you’re an athlete, movie star, rich person, poor person, a person from Europe … today we had people from Australia, every type of people come here,” said bartender Tina Rose, who has worked at The Desert Bar for seven years.

The Bar was listed as the No. 1 thing to do in Parker on TripAdvisor. Rose described the spot as the place your grandma drags you to with the rest of the family.

With all the advancements the bar has made over the years, it’s still a simple place. They only take cash. Cell service is rough. And they don’t even carry cheese. But they wouldn’t have it any other way.

“The greatest thing here, is no electronics,” Rose said. “Anywhere else, everyone’s on their (phone) … not here.”

The bar has begun its summer hiatus, and it won’t open again until the fall. In the meantime, Coughlin plans to add additions, which they’re keeping secret until October.