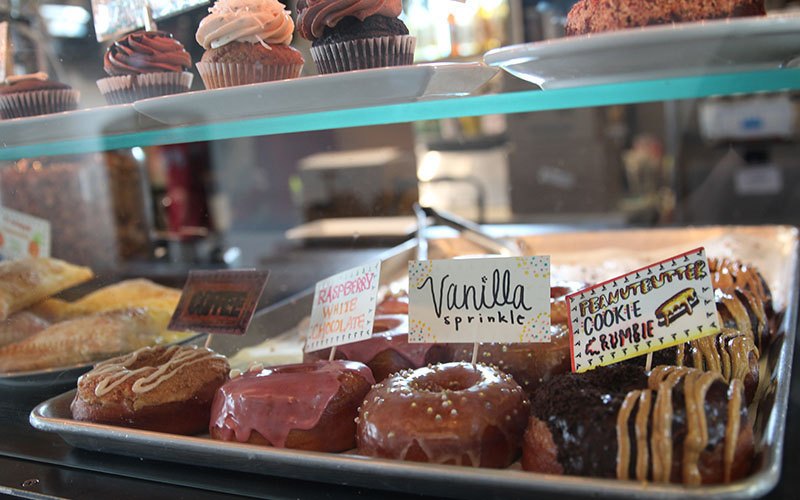 Vegan donuts are on the menu at Nami in Phoenix. (Photo by Chelsea Shannon/Cronkite News)

Alan Manuel, who has been vegan for two years, said there are more options in downtown Phoenix.

“When me and my girlfriend come downtown, we always find these cool new vegan restaurants, like we just recently discovered Loving Hut,” Manuel said.

Generally, vegetarians don’t eat meat, seafood or poultry. And vegans take it a step further and avoid dairy and eggs as well.

Vegetarian and vegan online resource Happy Cow listed five purely vegan restaurants in 2007 for Arizona. As of August, it listed 21. The list relies on user-generated content. 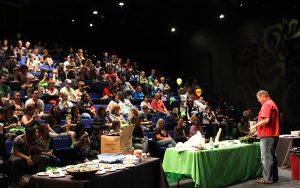 Food festivals that bring awareness to the diet, such as the PHX Vegan Food Festival, also indicate a growing interest. The festival sold out this year.

The smell of black bean burgers, mushroom tacos and falafel made with chickpeas wafted through the air at the February festival, held at the Phoenix Art Museum.

About 2,000 people attended the event, which included about 60 vendors, music and cooking demos, including one by Jason Wyrick, the first vegan chef to teach at Le Cordon Bleu College of Culinary Arts in Scottsdale.

“It’s insane because even three years ago, it wasn’t nearly this big, and now it’s big enough to sustain a festival for thousands of people to come, and we pack a theater for a cooking demo, it’s incredible,” Wyrick said. 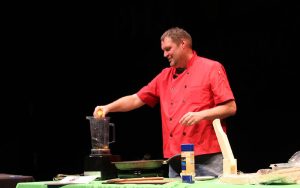 As he blends the peppers and vegan cheese to make taco sauce, Wyrick explains how becoming a vegan changed his life. He said doctors had diagnosed him as having Type 2 diabetes. But after he became a vegan, he “reversed his diabetes in eight months” and lost more than 100 pounds in two years, according to Vegan Taste, the business he owns.

At Vegan Taste, Wyrick and his wife Madelyn Pryor prepare fresh dishes for clients, and the company delivers them. They also hold classes and seminars. He noted that just because vegans eat a plant-based diet, they don’t have to compromise taste.

“My business increases by at least 50 percent every year, which is an insane growth rate,” he said. “I mean there’s some years where my business even doubles.” 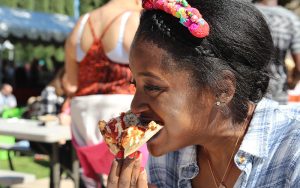 “I cook vegan food at home,” Ferdinand-Fernandez said as she waited for her sriracha pizza. “When I am out with friends, I won’t say no to cheese, but I try not to eat it.”

Not being vegan 100 percent of the time is a common phenomenon, said Carol Johnston, associate director of the nutrition program at Arizona State University.

A 2016 online survey commissioned by the Vegetarian Resource Group indicated that about 37 of respondents “always or sometimes eats vegetarian meals” when eating out, and about 3 percent noted they were vegetarian or vegan all the time. The survey had 2,015 respondents.

Johnston said people should be careful when they change their diets to either vegetarian or vegan. 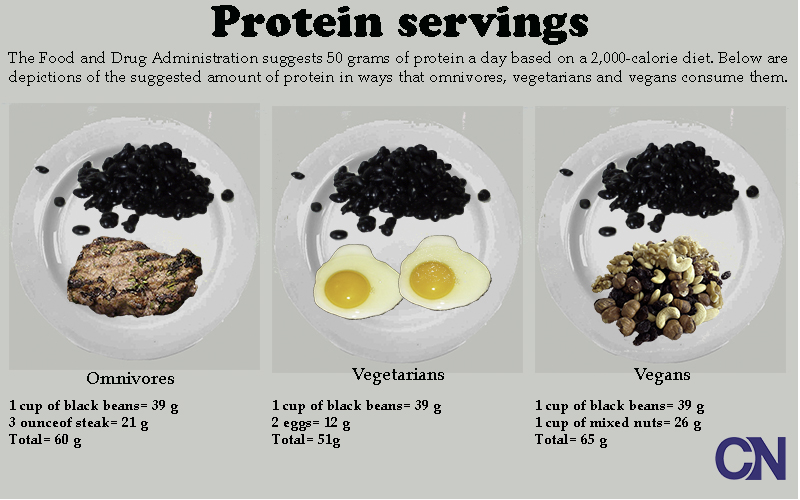