Border Patrol agents line up in formation on motor bikes in the Tucson sector. A Senate committee gave preliminary approval to a measure that would lift a lie detector requirement of some Border Patrol applicants, as the agency works to hire thousands of officers. (Photo by Josh Denmark/Customs and Border Protection) 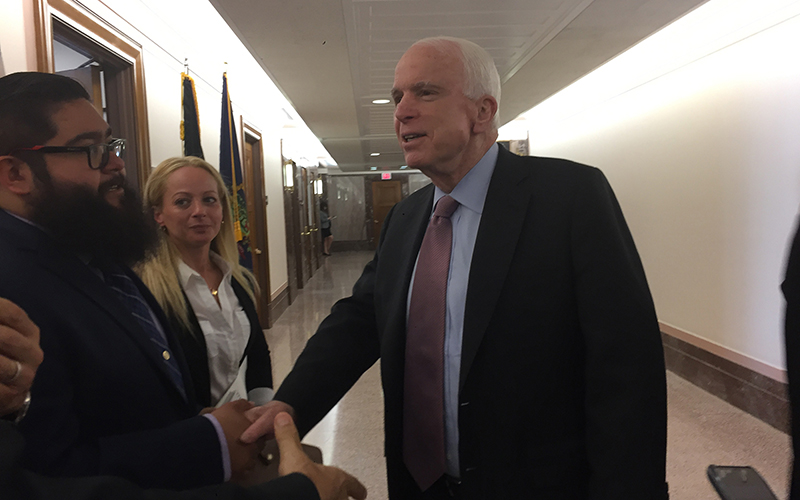 Sen. John McCain, R-Arizona, after committee approval of his bill that would waive the lie detector test of police and military applying to be Border Patrol agents. He called the current requirement an “insult” to those who served. (Photo by Megan Janetsky/Cronkite News)

WASHINGTON – A Senate committee Wednesday approved a bill that would make it easier to hire Border Patrol officers by waiving polygraph tests for applicants who are current or former military, police or other law enforcement officers.

The 9-2 vote by the Senate Homeland Security and Governmental Affairs Committee came the same day that a companion bill was pulled from consideration by the full House at the last minute.

Rep. Martha McSally, R-Tucson, the lead sponsor of the House bill, did not immediately respond to requests Wednesday on why the bill was pulled from consideration.

Critics of the measure have long said that watering down the hiring process could open the door to corruption and discrimination at the border agency. Similar arguments were raised in the Senate committee hearing Wednesday.

But Sen. John McCain, R-Arizona, one of the sponsors of the proposed Boots on the Border Act, said forcing vets to take a lie detector test for a Border Patrol job is “insult to them and their service to the country.”

The bill, which is co-sponsored by Sen. Jeff Flake, R-Arizona, comes as Customs and Border Protection grapples to fill more than 1,700 Border Patrol agent vacancies and another 1,000 unfilled CBP officer positions, according to the Department of Homeland Security.

And the department faces a looming hiring surge to meet President Donald Trump’s call for the addition of 5,000 Border Patrol agents and 10,000 Immigration and Customs Enforcement officers.

Union leaders for CBP and ICE workers testified in March that the department still had not filled 2,000 jobs authorized by Congress in 2014, a delay they blamed on the cumbersome hiring process.

“Border Patrol and Customs (are) hundreds short – if not thousands – and we need to expedite the process of people who served in the military and law enforcement,” McCain said Wednesday.

But critics worried that the bill might go too far.

“CBP is the world’s largest law agency … it’s most vulnerable for corruption,” said Sen. Kamala Harris, D-California, who voted against the bill.

CPB officials said Wednesday that the agency does not comment on pending legislation.

But advocates this week voiced their opposition to both the Senate bill and to McSally’s Anti-Border Corruption Reauthorization Act, saying more safeguards are needed, not fewer.

“What Congress is considering flies in the face of the facts presented to them by countless advocates and through costly litigation,” said a statement from the Mi Familia Vota Education Fund. “Advocates have been working to hold CBP agents accountable since the last hiring surge and this would be a tremendous step backwards in upholding the rights promised to all under the U.S. Constitution.”

Tomas Robles, co-executive director for Living United for Change in Arizona, worries that waiving polygraph testing would boost chances of hiring someone with animosity or prejudices toward migrants.

“Lowering standards or lowering measures for someone who qualifies for something as sensitive as a Border Patrol position, that’s a very dangerous step to creating an environment at the border that can be very dangerous for our country and for migrants crossing over,” he said.

Union officials testified in April that administration of polygraph tests for Border Patrol applicants has been “problematic,” noting that the failure rate at the agency is twice as high as it is for other federal jobs.

Robles said that, if anything, the polygraph needs to be replaced, not waived.

“There needs to be a process in place that can properly vet people,” Robles said. “If that involves increasing the use of polygraph as long as the results are improved, yes. If that means replacing the polygraph with another vetting process that helps to fully investigate the applicant, I think that’s fine as well.

“I just don’t think it should be eliminated without something to replace it,” he said.