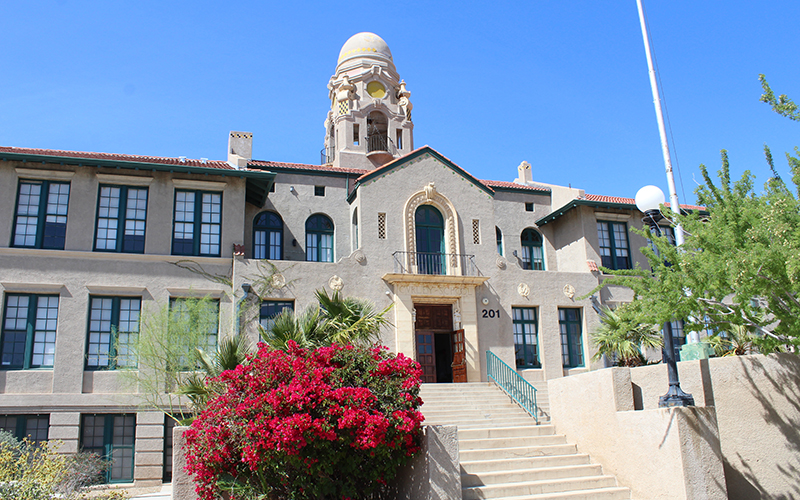 The Curley School building, located in the center of Ajo, was acquired by the International Sonoran Desert Alliance, and is now used for housing and workspace for local artists. The Community Learning Center, where the GED class meets, is also located on its campus. (Photo by Kayla Becton/Cronkite News) 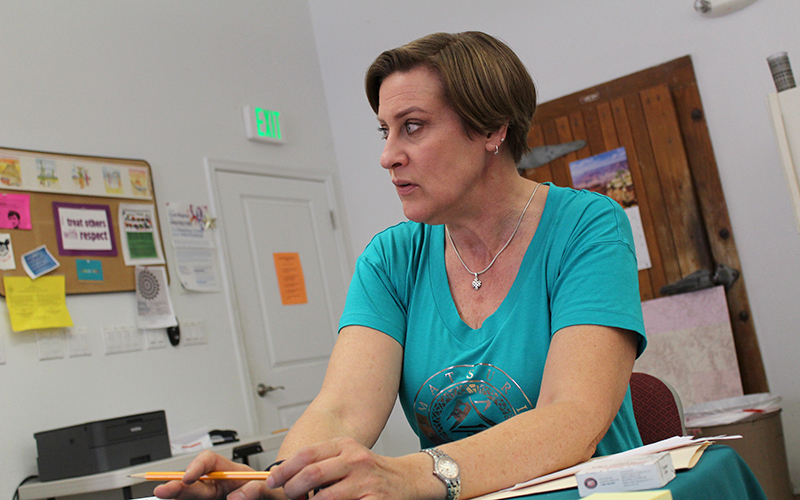 GED instructor Kate Hyde is in the classroom every weekday, helping students prepare for the necessary tests required to earn a GED certificate. (Photo by Kayla Becton/Cronkite News) 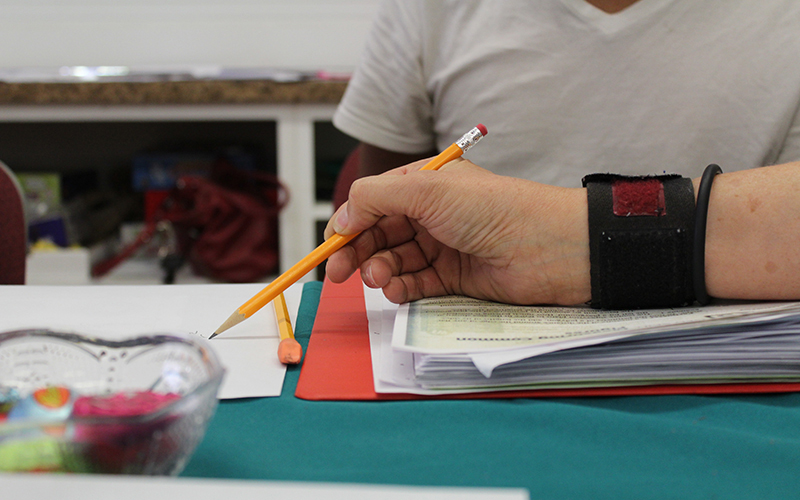 Kate Hyde explains math equations to students working toward GED certificate. It takes most students about a year, if they are attending class regularly, to earn a GED from ISDA’s program. (Photo by Kayla Becton/Cronkite News) 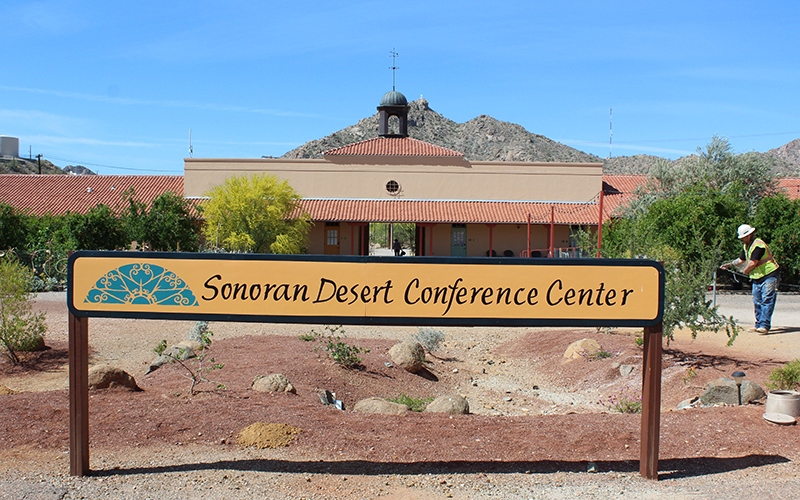 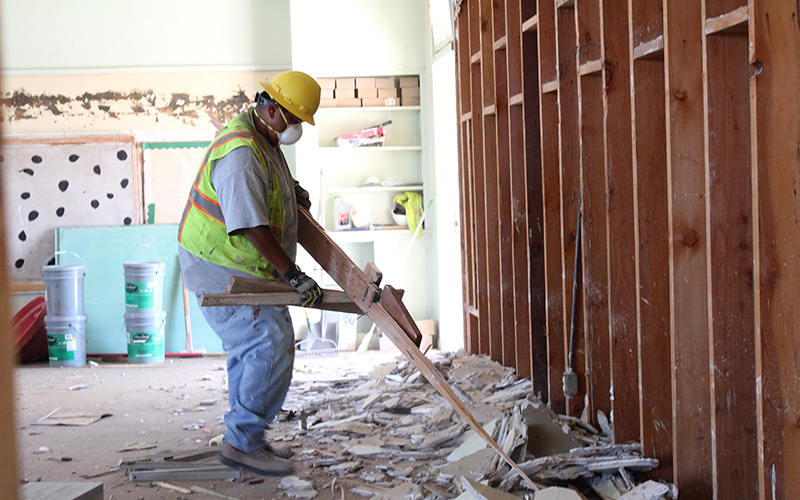 Apprentice Dustin Flores moves boards out of the old classroom to be taken to a landfill. (Photo by Kayla Becton/Cronkite News) 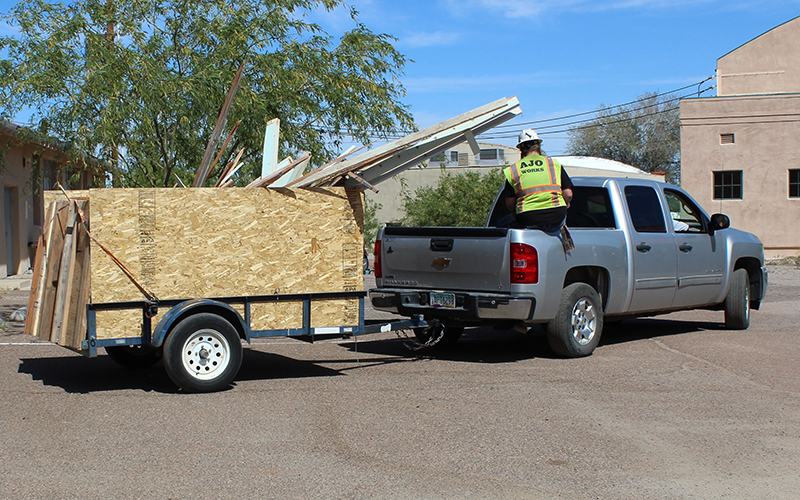 The three workers haul off a load of rubble from the construction site to a local landfill. (Photo by Kayla Becton/Cronkite News)

More than 30 years ago the New Cornelia open pit copper mine shut down, leaving more than 1,000 Ajo residents out of work. Until 1985, the mine had been the lifeblood of the town for 74 years, according to local history by the Ajo Chamber of Commerce. After the mine shut down, nearly half the town’s population left, and with it, much of the local economy as well.

But since losing its title as a mining hotbed, Ajo has gained another: one of the lowest ranking zip codes in the state for high school completion. It also carries the weight of a 28 percent unemployment rate of all its non-retired individuals, according to data from the U.S. Census Bureau.

Because of its status as a census region rather than a city, little structure has existed in the way of a central government in Ajo, especially since the town’s “parent company” left the scene. But one organization is working at the heart of the town’s economy to provide solutions for decades-old issues.

The International Sonoran Desert Alliance (ISDA) is a nonprofit organization based out of Ajo whose primary purpose is to design and implement projects in order to ensure the stability and development of the local environment, culture and economy. In addition to hosting cultural festivals, supporting local artists and assisting in desert conservation efforts, the organization is also working to pick up the slack where the economy has fallen.

For tackling the unemployment and economic issues, the ISDA’s plan is threefold: to provide opportunities for adults to get GED certificates, to learn some of the skills it takes to hold a job, and to empower potential entrepreneurs to start new businesses.

“My first job was at Arby’s,” said Ajo resident Hector Gracia. “After a while, I noticed that people were getting paid more than me, and I didn’t realize why.”

As Gracia grew tired of getting paid less than his coworkers, he discovered that one thing was standing in the way.

“I figured out that their jobs just had that requirement of GED or high school,” he said.

Wanting to make the most out of his time at work, he began working toward his GED certificate two and a half years ago in hopes of finding a higher paying job.

According to Kate Hyde, the current teacher at ISDA’s Community Learning Center, many students like Gracia come with similar circumstances.

“It’s a fact,” Hyde said. “When someone doesn’t have their high school diploma or GED certificate, they make about $300,000 less in their entire lifetime. So that’s an argument for getting your GED. You’ll automatically have more opportunities to get better paying jobs.”

Hyde said the lack of a high school education proves to be one of the largest barriers between many Ajo adults and a living wage.

About 250 individuals have participated in ISDA’s GED program since it began in 2008, with about about a 25 percent attainment rate. This is not far below the national average attainment for adult education programs, which is 27 percent, according to research by Portland State University. Most often people will also leave and come back or transfer locations in the process of completing their certificate, since they are juggling school with other responsibilities.

“We try to offer an open door policy,” Hyde said. “That’s why I say, never give up, just keep coming back and knock off another test.”

Gracia said that, although he is grateful for the opportunity to earn his GED certificate, it can be difficult to work and go to school at the same time. But ISDA offers solutions to help ease the burden.

While job placement isn’t the focus of the GED program, it does assist students in finding work that fits with their schedules during and after completing the program. But studies come first, Hyde said.

“We try to offer that (job placement) as a benefit of the educational process once they’ve established themselves, but if they have a tough time coming to class with their work, we ask them to not come,” Hyde said. “It’s just a balance between the two.” 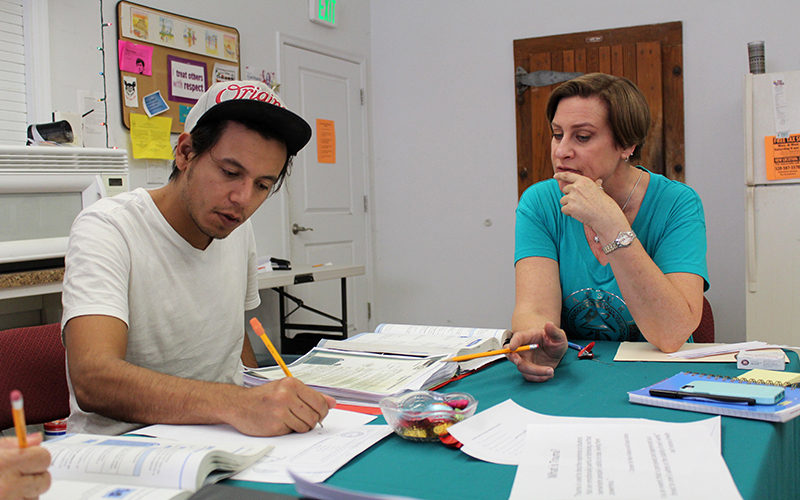 Kate Hyde (right) works with student Hector Gracia on math homework in the GED classroom on April 3, 2017. The GED program requires the students to pass five tests to earn a certificate. (Photo by Kayla Becton/Cronkite News)

Gracia has benefitted from the work placement aspect of ISDA’s GED program in the past, but he said he looks forward to the opportunities that will open up when he graduates. He would like to join the military.

“The next goal,” he said, “if I don’t become military, I’ll go become a professional racecar driver.”

It takes time and effort to complete a GED certificate or diploma, especially as an adult. But when it comes to working toward achievement, Hyde said, Gracia is “beyond a survivor; he’s a hustler.”

For many Ajo residents, the hustle is bigger than just earning a certificate or diploma. It also includes changing a history of generational disconnection from school.

ISDA works alongside the Zip Code Project, an initiative by the Arizona Department of Education that focuses specifically on re-engaging young adults who may not be in school or the workforce. The project coordinates with ISDA on efforts to improve educational attainment, specifically among young adults, as the majority of those ages 16 to 24 in Ajo are not employed or in school, according to an American Community Survey.

Christopher Dickinson, Manager of the Zip Code Project, said one of the main causes of low educational attainment in the area comes from the deeply rooted context of unemployment and poverty. He said, in many cases, these young people have parents and grandparents who “maintained consistent disconnection (from school) and unemployment through their life, still had children, and then it’s a cycle.”

“Ajo being such an extremely rural and small community,” Dickinson said, “That organization (ISDA) really is one of the main pillars in that community.”

Bridging the gap between education and employment

In addition to giving people in the town of Ajo a free chance to catch up on secondary education, ISDA takes advantage of local resources to provide work experience.

“We started with GED and adult ed,” said Aaron Cooper, executive director of the ISDA. “But just because someone has their GED doesn’t necessarily remove or lower the barrier to employment if they don’t have some of the soft skills: if they can’t show up on time, if they can’t communicate effectively.”

This is what led ISDA to introduce opportunities for people to develop these essential skills. These include an internship program that embeds workers into positions with a participating business and a registered apprenticeship opportunity to work under the ISDA to gain experience in skilled trades. These programs can be done alongside the GED program or separately.

Only three people have completed all 4,000 hours of the registered apprenticeship program, but Cooper said nearly all the participants experienced “positive outcomes” related to marketability.

Josh Manuel is one of the three who have completed the apprenticeship program. He is now working full time as an instructor with apprentices on the renovation of the Sonoran Desert Inn and Conference Center, a project overseen by the ISDA. He completed three levels of training, graduating from the program with a certificate of completion and two and a half years of marketable work experience to help him land a job.

“At the time I was looking for something that would increase my marketability,” Manuel said. “I grew up doing this kind of work, but I was wanting to get a certificate or something to show that I was qualified.” 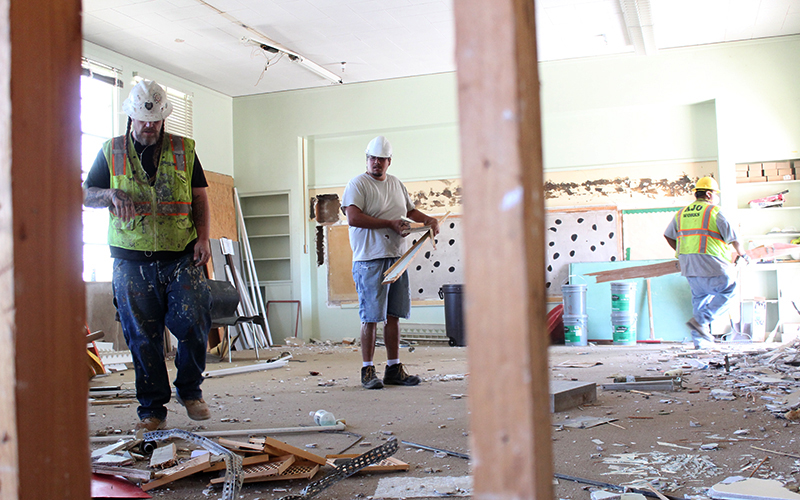 In the future, Manuel hopes to land a federal or county government job. But in the meantime, he hopes to stay in Ajo and use his skills to “keep the income coming.”

Cooper says he hopes that in addition to developing local education and job skills, the ISDA will also nourish an “entrepreneurial spirit” in Ajo that the monolithic mining economy did not encourage.

“Our goal would be to train people for opportunities that are here, that could be here or that will be here,” he said. “We don’t want people to have to leave to be successful.”