Practices, workouts, film sessions and travel days take up chunks of their weeks and demand creativity to build schedules with full-time academic loads.

At Arizona State, athletes are able to learn on an equal playing field with their in-class peers. Athletic department time commitments can’t be blamed for missing lectures or quizzes.

Taking multiple online classes is common. This semester, ASU men’s basketball player Shannon Evans has all but one class online. During her senior year, former ASU women’s soccer player Lucero Lara had all online classes. The exception is freshmen athletes, who are expected to take all classes in person.

“Obviously, going to ASU, it’s one of the advantages that you have,” former Sun Devils quarterback Mike Bercovici said. “There are so many options as far as online classes, but one of the biggest benefits of online classes was for me as a younger kid. You are trying to balance your life out and you have to travel sometimes on Thursdays and always on Fridays, and it gives you that option to kind of get your homework done and quizzes done on the road or in the hotel.” 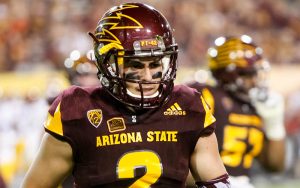 Bercovici earned his bachelor’s degree in business management in May 2014 and earned his Master of Sports Business and Law in 2015. He is still pursuing his NFL dreams and signed a free agent contract the with San Diego Chargers in January.

Although online classes have helped athletes with their workloads, to some it defeats the purpose of college. Bercovici said he thought online classes took away from the traditional college experience.

“For me, as I got older and got more serious about my education, in-class classes became extremely important and vital to me,” Bercovici said. “It’s kind of your classic college atmosphere and actually being there in class makes you feel like more of a student. At least for me and the way I learn, I like to be in front of the teacher. I would say old-school style.”

Bercovici had to take online classes on the road during football season and often was taking quizzes the night before games in a hotel ballroom.

“I want to say we were in Oregon playing Oregon State in 2014,” Bercovici said. “I did like a (Communication) 100 class like the night before and I was thinking, ‘Wow, well we’re trying to win a game here and I’m doing this for Comm class.’ ”

Bercovici told his teammates struggling in online classes to retake the class in person the next semester. He took online classes for a lot of his electives but had a full in-person class schedule while pursuing his master’s degree.

“In my opinion (online classes are) a way to get an average grade to pass a class,” Bercovici said. “It didn’t have the same emotional connection that you do to being in class. So whether you got a good grade or a bad grade, it was always, in my opinion, if you were in class you could always do better, so that’s how I thought.” 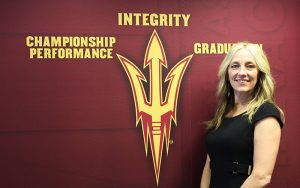 Andrea Lore, ASU’s associate director for student and staff development in the Office of Student Athlete Development, said ASU encourages athletes to take a balance of online and in-person classes.

While freshmen athletes are expected to take all classes in person, she said, but sometimes the logistics don’t work.

“If they need to take the class to be on track in their major, and if it’s dead in the middle of practice in season and we can’t move it, but there is an online option, we would say, ‘OK, you can do this online option,'” Lore said. “But we are going to increase your study hall hours, so instead of going to a physical class, they are spending time in our center and they are getting support. Maybe (also) they have a tutor.”

Lore said she has seen more online classes offered in the the past five or six years due to improvements in technology and the increase of ASU students. She said her job has changed in terms of monitoring students because of deadlines that extend into the weekend.

Since this new generation has grown up with technology, the online classes aren’t as daunting as it might be to others, she said.

“To me like, ‘Oh my gosh there is all these details,'” Lore said. “But for this generation, they are connected with their phones and online so I feel like it’s something that they have a little naturalness that they have in terms of navigating.”

Online classes can be tedious, Bercovici said. He would meet with other students and teammates to help go through the material.

“I remember we would get together, five, six, seven of us doing projects in online classes because we were trying to help each other out,” he said. “If the goal of an online class was to find people in the class and meet up with them and figure out a way to get things done, then they did their job. You know what classes aren’t going to be as hard as the other ones. To me those online classes really challenge you.”

Whether taking classes online or in person, student-athletes must decide where their priorities are. 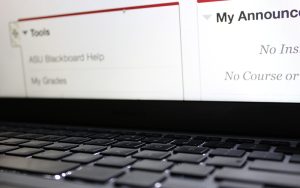 Online classes are a way for Arizona State athletes to meet requirements for their major without having to attend every class in person due to their busy schedules. (Photo by Samantha Pell/Cronkite News)

For Bercovici, it was school.

“My priority was, ‘I’m not going to watch a lick of football until I get my homework done, because if I was doing my film then all I would be thinking about was my homework,'” Bercovici said. “I used film study as my reality TV or like my enjoyment if you can call it that. It’s easier than school so that’s how I treated it. For some other buddies it might be the opposite. You never know.”

For Evans, it is basketball every time.

“On my sport, I would say maybe like two to three hours a day,” the junior said. “School maybe hour to an hour and a half. More on your sports for sure. It probably shouldn’t be that way because you are a student-athlete, but we all know that you are here to play your sport.”

A Communication major, Evans transferred to ASU in 2015 after two years at the University of Buffalo. He found his previous school more academically challenging because it offered fewer online classes.

“I’m trying to just grind it out as much as I can,” Evans said. “If it wasn’t for basketball, I probably wouldn’t be in school in the first place.”

Evans only has one in-person class this semester. His nine other credits are online. He said the majority of his teammates are in the same boat, with the exception of foreign athletes, who have to be in nine credits of in-person classes each semester they are attending ASU. That is due to their visa requirements.

“I like it here better, but I feel like it’s harder (at University of Buffalo) because you actually have to be in class and that’s tough,” Evans said. “Here I have one class Tuesdays and Thursdays, but other than that, I’m just chilling. I just go to study hall with my tutor and my adviser and get my work done.”

Like Bercovici, Evans has had to complete online classes on the road.

“Not by choice, but by force,” Evans said. “(ASU academic tutor) Jessi (Richardson) makes sure we bring our laptops on the road with us and we have study hall in the ballroom and we get our work done. Jessi, she proctors us and she really proctors. She makes sure (there is) no cheating, none of that. You can’t talk.”

Evans attends mandatory study hall three times a week for several hours. But the overall sentiment he feels being on scholarship as a student-athlete is to put his sport ahead of school.

Especially for players who have NBA aspirations. Evans said they “don’t try to do school that much” and “take the easier majors so you can just breeze past.” 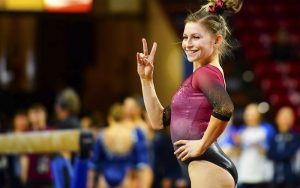 ASU gymnast Corinne Belkoff said she prioritizes her school work, online or in-person, over her sport.

“Of course athletics is always a big deal and is time-consuming, but all my time outside the gym is usually school,” Belkoff said. “I put that ahead of my social life, pretty much everything else.”

Belkoff, an economics major, was initially in pre-med but didn’t like the major and switched. With economics, she has two online classes in her current schedule. She said she prefers in-person classes because of the complex classes she is taking for her major, but sometimes that’s just not a viable option.

“It’s easier to do more online during season,” Belkoff said. “You kind of just have to adjust. I’m taking online economics right now and it’s hard to teach myself and I would rather be in-person, but sometimes you just have to cope.”

Belkoff said she uses tutors when she needs them, but since she’s a driven person, she doesn’t use them very often.

“You really got to prioritize your time,” Belkoff said. “Pretty much any time I’m free in the hotel room I’ll take out some homework, do it, grab my laptop, but it works out. We usually have team study hall for like two hours on the road.”

Former ASU soccer player Lucero Lara uses tutors often. She was the first person in her family to go to college and she leaned on ASU tutors and academic coaches to steer her in the right direction.

“Honestly if it wasn’t for them, I probably wouldn’t have finished school because I had no idea what I was doing and what I was putting myself into,” Lara said.

She graduated from ASU with an undergraduate degree in communications in December 2015 and in 2016 got her Master of Sports Business and Law.

But Lara didn’t get off to the best start in college. She came into ASU with a torn ACL and had to sit out her entire freshman season. She said she became depressed and put all her efforts into trying to rehab her ACL instead of focusing on school.

But once she got a “not good enough GPA” from her coaches, she started to pay more attention to her schoolwork.

“I think it must have been 12 hours in study hall,” Lara said. “At first it was just like go in, do my hours and leave, and then I started honestly paying attention to my grades and at school and I literally would be in there 12 to 15 hours a week. It wasn’t a chore anymore. It was something I needed to be there in order to do work because that environment helps me study and not get distracted.”

She took a full online class load her senior year because she stacked all her classes for her major in the first few years at ASU. But before that, it was hard for her to balance in-person classes and traveling for soccer.

“You would miss two lectures and you didn’t know what was going on,” Lara said. “Yeah, you had notes, but you didn’t get that one-on-one interaction with the professor that you could have had. Obviously all online is no interaction, but everything you need is there and it’s equally for all the students. It wasn’t me leaving and those students in class had opportunities to talk to the professor.

“Online is an equal playing field.”