Postino Annex, an Upward Projects restaurant, opened in 2014 in the red brick schoolhouse owned by ASU on College Avenue and Fifth Street in Tempe. The building has been there since the 1940s. (Photo by Graham Bosch/Cronkite News)

The story of Federal Pizza on Central Avenue, a restaurant that opened five years ago in a 1950s building, began with a surprise. When the restaurant’s construction team started to dig up the floor of what was the First Federal Savings and Loan to add plumbing for the bar, they ran into a problem.

“There was an inch-thick plate of steel on the floor that they had put in there on the perimeter of where the vault was originally, because they didn’t want someone to tunnel up and underneath the building and get into their vault,” said Lauren Bailey, co-founder of Upward Projects, the restaurant group that owns Federal Pizza.

The discovery drew laughter and a new design that retained the steel floor, she said. Each opportunity to place a modern twist on a historic building brings unexpected results, both good and bad. That’s part of the excitement, she said.

Bailey and her business partner, Craig DeMarco, are among several Valley developers focusing on a practice called “adaptive reuse.”

Developers repurpose a historic, unused building into something new and stylish while leaving the building’s core design features intact. The practice conserves construction resources and maintains the historic value of the site. It also helps new businesses complement their neighborhood’s aesthetic to fit into the surrounding community more seamlessly, architects say. But it’s not easy and can sometimes spur controversy.

The practice is fairly new to Arizona but is growing, according to Valley architects and city historical preservation experts.

Some examples of modern, historic projects around the Valley:

The Phoenix program is nine years old, but Chandler, Tempe, Mesa and Tucson have started their own programs since, said Eric Buskirk of the Phoenix Office of Customer Advocacy, which assists developers and business owners who are new to the land development and building permit process.

Developers are renovating older buildings in a similar fashion in cities across the country, including the Midwest and coastal cities like Los Angeles, Buskirk said.

Out with the new, in with the old

“When we approach a restaurant, we end up trying to look at it with a fresh perspective and not bring a lot of preconceived ideas about the aesthetic to it,” said Michael Rumpeltin, architect and founder of Brick & West Design, the firm behind Postino Annex and Culinary Dropout at the Yard.

Bailey said renovating historic buildings saves a “substantial amount of stuff that doesn’t biodegrade,” such as pavement, glass and valuable metals like iron and copper, from being dumped in a landfill. 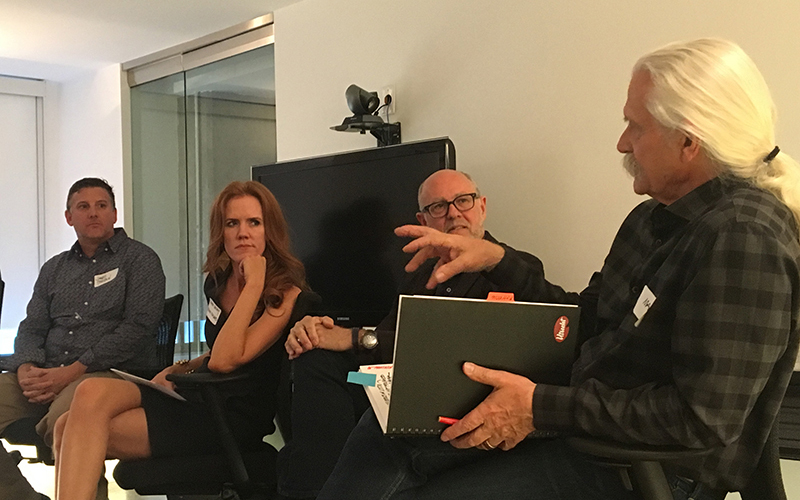 (From left) James Trahan of 180 Degrees Design + Build, Lauren Bailey of Upward Projects and Scott Jarson of Jarson & Jarson Real Estate listen as architect Mark Philp of Allen + Philp Partners speaks about his work on the renovation of Hotel Valley Ho at a panel discussion held by Local First Arizona. The panel covered adaptive reuse and the modernization of mid-century buildings for new uses. (Photo by Graham Bosch/Cronkite News)

The practice also allows new businesses to pay tribute to what was there, she said.

“People really feel connected to (the history),” Bailey said. “They want to know the story.”

“Oft times we’re heavily embedded in particular neighborhoods, in subdivisions, because of the design that is inherent (to) those locations,” Jarson said.

Mid-century homes are “inherently more sustainable” than new homes, especially if the design keeps them connected with the desert landscape, Jarson said.

“They were designed for a time in Arizona where you really dealt with the environment, you didn’t ignore it,” he said. “So they’re smaller, but they also have deep overhangs. They have a lot of glass, but the glass generally faces in directions where you don’t get a lot of sun glare. So they are very sustainable houses just by the nature of the way they’re originally designed.”

Getting back to basics

Arizona, and particularly Phoenix, has a legacy of architecture that represents the city’s history and keeps residents connected with the desert, Jarson said.

“We have this architectural heritage in Arizona that’s been ignored for a long time,” he said. “Our firm and people like us have been celebrating these houses, and now they’re coming a little more into the mainstream.”

Mark Philp, a founding design partner at Allen + Philp Architects, said remodeling mid-century buildings is about stripping back layers of design and “getting back to the bones.” Philp was the architect behind the 2002 renovation of historic Hotel Valley Ho in downtown Scottsdale.

Westroc Hospitality bought the hotel and upgraded it from a motor lodge, adding five levels to the existing two-story structure and replacing the parking lot that surrounded the building with landscapes and pathways while keeping the hotel’s retro exterior look, Philp said at a modern architecture panel hosted by Local First Arizona.

Renovating mid-century properties has not always been a goal in Arizona, Bailey said.

“I think it was super important for our city, because for a while there we were really a scrape-and-build mentality, and there was a lot of that going on,” she said.

“Postino Annex… It was originally a schoolhouse in the ‘40s,” Bailey said. “But that whole area over there, there’s a lot of Indian burial grounds. So when we were digging that up, they had found some pottery shards.”

An Arizona State University official had to oversee the rest of the development process at the College Avenue location in Tempe and keep a log of the artifacts the construction team found in case there were human remains buried, Bailey said. If that happened, “we probably still wouldn’t be open,” she said.

Sometimes, companies hoping to adapt old buildings for new uses need to appeal to city governments to protect the structures.

Phoenix started an Adaptive Reuse Program in 2008 that offers development assistance, financial incentives and relief from some regulations.

To qualify for the Phoenix program, buildings must have been permitted before 2000, be undergoing a change in tenants or change in use and be no larger than 100,000 square feet, according to the city website. The renovation must incorporate the entire building.

Buskirk said developers and cities across the U.S. are adding their own “unique spin based on what the needs are” in renovating historic properties.

In Scottsdale, a building is considered significant to the community if it has historic value to the community or an important cultural role, such as art, sports or famous people such as Frank Lloyd Wright, said Steve Venker, historic preservation officer for the city.

The Pink Pony restaurant in Old Town Scottsdale is known for drawing crowds of baseball fans to the city for spring training games, leading the city to put the building on the Scottsdale Historic Register, Venker said.

Philp said his team faced opposition from Scottsdale officials when creating the plans for the redesigned Hotel Valley Ho, which was added to the historic register 15 years ago. The renovations, including a seven-story tower and an entryway that occupies what used to be a section of Main Street in downtown Scottsdale, were only possible because the team found the original designs for the building, he said.

“We discovered that there was a concrete floor plate plan, one of them hidden back in the structural drawings, that said that there were going to be five more levels on that building,” Philp said. “That’s the only reason that we were able to sit with the city fathers in Scottsdale and say, ‘this was meant to be.’ ”

The original plans for the hotel created historic precedent to complete the tower, Venker said. The change was a point of controversy, and still is, for some people, he said.

“That tall building across from single-story, single-family detached homes is somewhat out of sync with the rest of the character for Scottsdale,” Venker said.

Renovations can help protect buildings considered historic by the community, but not everyone agrees on how renovation and construction should occur.

In April 2016, a development company unexpectedly began demolishing the 1947 Stewart Motor Company building in downtown Phoenix in the midst of negotiations with the city of Phoenix over potential tax incentives, according to azcentral. Residents of the Roosevelt Historic Neighborhood and city officials, including Mayor Greg Stanton, spoke out against the timing of the demolition, and the city halted negotiations with the developer, Empire Group.

Residents of the Arcadia neighborhood in Phoenix had similar concerns about renovations to the David and Gladys Wright House, designed by Frank Lloyd Wright in 1952.

Developer Zach Rawling purchased the property in 2012 with the intention of turning it into a museum and educational center. Arcadia residents at first praised Rawling for rescuing the property from demolition but soon turned sour at the prospect of increased traffic and noise in the neighborhood, according to azcentral.

Jarson is a member of the board for the Frank Lloyd Wright Building Conservancy and joined other city residents pushing to save the Arcadia house, but he said he generally does not face opposition in his work.

“Mostly it’s positive,” Jarson said. “There’s been increasing awareness of the fragile art that architecture is, and in the last few years especially it’s become more and more a conversation about how to save it as opposed to ‘why are you saving it?'”

Outreach and communication with residents are key to helping people understand the purpose of a new development, Jarson said.

People are often uncomfortable with change, but it is necessary in some cases, Venker said.

Renovating historic properties “indicates a pride of ownership, pride of location and an interest in reinvestment in the city, and that’s an important aspect for city survival and continuity,” Venker said.

Bailey said it would be hard to start a project from scratch after realizing how successfully old buildings can be adapted, and she’s happy others are doing the same.

“I’m just really excited about all the people that are contributing to this philosophy,” Bailey said. “I think it’s making Phoenix a really special place in terms of giving neighborhoods an identity.”