Sun Devil Stadium in Tempe is in the second phase of a three-phase, $268-million renovation project. The completed project could make the stadium a target for corporations shopping for a naming-rights deal. (Photo by Fabian Ardaya/Cronkite News)

TEMPE — There are 13 NCAA Football Bowl Series programs that have made naming-rights deals for their stadiums. Only two are members of the Pac-12 Conference, and Arizona State isn’t one of them. That could soon change.

Sun Devil Stadium is in the midst of the second phase in a three-stage, $268-million renovation project. When complete, ASU will have an upgraded facility that could be attractive to companies looking for a naming-rights deal on a stadium.

Before the start of the 2017 season, ASU officials hope to finish a new student-athlete facility in the north end zone of the stadium and complete installation of a north-side video board that measures 48 feet by 113 feet.

The third phase, reconstruction of the east side of the stadium, will begin after the upcoming season.

Ed Olsen, general manager and CEO of sports marketing agency Line Drive and a former ASU executive who oversaw sponsorships and media assets for the athletic department, said there have been advocates of a stadium naming-rights deal at ASU for years.

“Arizona State University is a prime commodity in the local, regional and national sports landscape,” Olsen said. “A naming-rights deal for a newly renovated Sun Devil Stadium could be a robust revenue source for Sun Devil Athletics.”

There are several reasons a company might seek such a deal, Olsen said. The biggest is branding: Companies hope to build their brand through signage and other marketing assets to create a top-of-mind awareness for consumers. Top-of-mind awareness is a marketing concept that means consumers will think of that brand first.

Although he said he doesn’t know anything about any potential negotiations, Olsen said MidFirst Bank and State Farm Insurance could be two good options for Sun Devil Stadium’s rights because they are already university partners.

Olsen said banks, insurance companies and media companies are the most likely to purchase naming rights because of perceived benefits of brand affiliation for their businesses.

Sun Devil Stadium could be an attractive brand-building tool.

“Arizona State has a highly desirable group of young people graduating from it, which could be beneficial for a company,” Olsen said. “It has a desirable location for a lot of companies in the sense of the tax structure of Arizona and the climate. There are benefits for the company outside of just the signage.”

Olsen said there are many factors that influence the value of a stadium naming-rights agreement. A few of them are the sport, the size of the market the university is located in, and the variety of other events that could be hosted at the venue.

Despite that, and only eight days after the stadium played host to the Final Four, University of Phoenix and Cardinals officials jointly announced that the university will back out of the 20-year deal with nine years remaining on it.

The Cardinals’ search for a new partner for that stadium could leave ASU to play second fiddle in the search for a deal as larger companies may gravitate towards an NFL facility rather than Sun Devil Stadium.

However, Sun Devil Stadium has a résumé that can compete with the Cardinals’ facility. It also played host to a Super Bowl, hosted the Fiesta Bowl, Cactus Bowl, concerts and, in 1987, a Mass celebrated by Pope John Paul II with 75,000 in attendance.

“When the stadium aged and became a bit archaic in its landscape, those events moved to other venues,” Olsen said. “Now, with the work that they are putting into Sun Devil Stadium, I think you’ll see the opportunity for them to hold more events will be there, if they choose to do so.”

Rocky Harris, chief operating officer of Sun Devil Athletics, said there is no new information “to share at this time” regarding a potential naming-rights deal for Sun Devil Stadium.

Along with 13 FBS programs with deals, there are 20 college basketball arenas with naming-rights agreements, including ASU. Olsen said he is confident there will be a dramatic increase in those deals because of the unpredictable aspect of professional sports.

He said he believes the rise of college athletics is due in part to the high rate at which professional athletes change teams, either through trade or free agency.

“The proliferation of college athletics, I think, went hand in hand with more people going to college and there being robust growth there,” Olsen said. “To me, the college game provides unparalleled excitement and competition.

“I also think college sports allows the fan to carry forward their affinity for the team and not the individual, whereas I think pro sports has a tendency to be tied to the individual a little bit more than the team at times.”

Washington and California are the only two schools in the Pac-12 that have sold the naming-rights to their football stadiums. Cal reached a 15-year, $18-million deal with gaming company Kabam. Meanwhile, Washington’s 10-year, $41-million naming rights deal with Alaska Airlines for Husky Stadium reportedly is the most lucrative stadium naming-rights deal in college sports.

Carter Henderson, Washington’s associate athletic director for marketing and communications, said Alaska Airlines had been a university partner for decades and the football stadium deal was an extension of the basketball arena naming-rights deal done in 2011.

Alaska Airlines had been associated with the school for years, and its geographical relevance added to the fit. Additionally, the school branded other facilities that are located together as part of Washington’s Alaska Airlines Athletic Village. 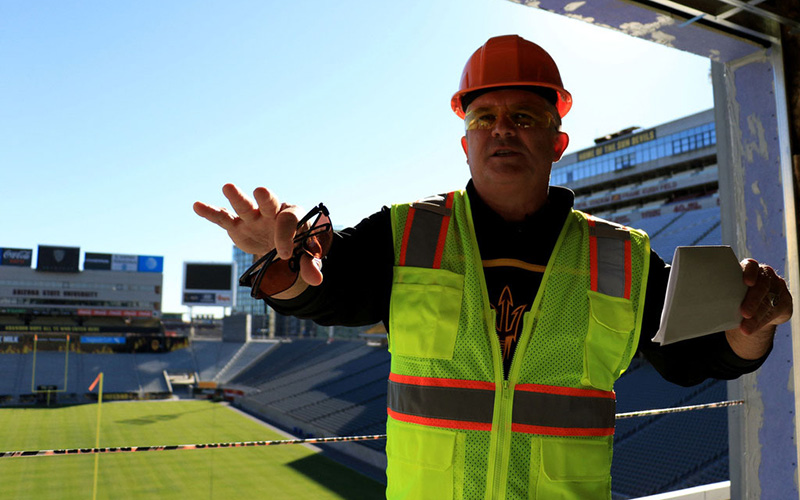 “I think it’s just knowing and having a pretty clear sense of your value and how you value your assets, and trying to find somebody who that value is a great pair with,” Henderson said. “I think when you find someone who’s mutually aligned, that’s really critical.”

The obvious benefit to a naming-rights deal is the revenue that an athletic department receives. For Washington, some of the revenue will go toward paying off the renovation debt.

The money will also be used for coaching salaries, recruiting and improving other facilities. Henderson said about 85 to 90 percent of the athletic department’s revenue is earmarked for Washington’s football and men’s basketball programs.

“For us, it’s really imperative for the health and well-being of all of our department that we adequately and responsibly monetize football and men’s basketball,” he said. “Generally speaking, I think the money definitely goes to enhance the competitiveness of all your sports programs, but probably football in particular.”

Henderson said the partnership with Alaska Airlines has paid dividends in other ways.

When Washington’s football team qualified for the College Football Playoff last season, there were a limited number of flights for fans to take from Seattle to get to the game. However, Alaska Airlines added fights, decked the planes out in purple and gold, and even played the fight song during the flight.

There will almost always be opposition to naming-rights deals in college sports, usually from former players and alumni.

Rob Reyes, who graduated from ASU in 1998, said he is fine with the idea of ASU selling the naming-rights to the stadium because he considers it the “lesser of two evils.”

As long as it incorporates the traditional names.

“For me, I would rather have a naming sponsor instead of going into debt or creating a bond or increasing tuition or having a fee tacked on,” he said. “I think the naming-rights is less painful than telling people, ‘Your $350 season tickets are now $1,000 because you don’t want a naming sponsor.’ ”

“If you lose the Sun Devil Stadium term, there’ll be hell to pay,” Reyes said. “Fans and alumni would be really upset with it.”

Henderson said the key to limiting opposition is making sure fans know the school is trying to find the right partner, not just the highest-bidding company or individual.

He said most fans are smart enough to know that increased revenue in an athletic department will benefit all sports.

Dan Trujillo, who describes himself as a lifelong Sun Devils fan, grew up in the Valley, attended ASU and regularly attends games at Sun Devil Stadium.

Trujillo said the stadium will always be Sun Devil Stadium to him, regardless if the university adds a corporation’s name to it. But he understands why the athletic department is considering such a move to remain competitive.

“We as fans are saying, ‘We need this, we want this,’ ” he said. “We have these expectations to get a big-name staff that can draw in recruits and can coach well. We want them to win and we want them to have other things.

“Well, where does that come from? It’s not always going to come from donors. Part of that becomes how you leverage the big corporate sponsorships.”

Danny White, who was a star quarterback and punter at ASU from 1971-73 under Kush, recently was hired by current ASU football coach Todd Graham as a consultant.

White said he and most of his ASU teammates would be opposed to the school changing the name of Sun Devil Stadium or Frank Kush Field. But he added that he and others will have to learn to accept it.

If ASU identifies potential partners, a the deal has to be ironed out. Olsen said negotiations would most likely begin with a high-ranking executive from ASU’s athletic department. From there, each side vies for certain components.

An athletic department is interested in the revenue, but a company will have its own needs. It may want hospitality assets, stadium signage and brand positions on game broadcasts.

“It’s a matter of aligning those needs with available sponsorship assets and pricing those assets so that you are not pricing yourself out of the market,” he said. “You fulfill the client’s needs while maximizing your revenue generation.”

An important component of a deal is contract length. The longest current stadium naming-rights deal in college sports is at Louisville, where the school sold naming-rights to its football field to Papa John’s Pizza for 52 years.

“People’s needs mature and change,” Henderson said. “We didn’t want to end up in a situation where 10 or 15 years down the road what had been a great fit at the time just wasn’t anymore for different reasons.”

While former ASU players and alumni may not love the idea of a corporate name being added to Sun Devil Stadium, they recognize the value such a deal would have for the athletic program.

“As much as I dislike it, and would like it to remain Sun Devil Stadium, I’m sure it’s something that’s going to happen, depending on the amount of money they can bring in, and probably is something that has to happen,” White said.

“Times are changing. I guess you have to change with them.”