Coaches such as Chandler’s Shaun Aguano can organize practices all year thanks to a bylaw passed by the Arizona Interscholastic Associatiion. Critics worry that it will lead to more specialization by high school athletes. (Photo by Fabian Ardaya/Cronkite News)

PHOENIX – High school athletes in Arizona can now practice their sport year-round — whether they like it or not.

Reaction has been mixed among Arizona coaches, but most aren’t expecting to see dramatic changes in their programs because many schools already hold some sort of year-round practices or workouts through “varsity physical education” classes.

However, critics believe the change will create even more specialization in high school sports. That could be especially significant for small schools, which often depend on the same star athletes in several sports.

“When you look at the smaller schools, the best football player is often the best basketball player or baseball player,” said Casa Grande High football coach Jake Barro. “A lot of these athletes are just well-rounded and good at everything. So, I think it might hurt those small schools when it comes to kids having to make decisions whether they want to participate in as many sports as they have been.”

The AIA divides its divisions by school population, although schools can petition to move up or down. The largest schools are in 6A and have thousands of students. The smallest are 1A schools that might have less than 200 students and play eight-man football. Casa Grande falls in the middle as a 4A school.

Richard Taylor, football coach at 5A Centennial, worries that athletes feeling pressure to stick to one sport will miss opportunities other sports might offer.

“I don’t think it gives kids much of a chance of being a kid or encouraging them to participate in other sports,” Taylor said. “I think it can have a really negative affect, especially if the coaches say that if they want to play football next year, then they need
them out (year-round). 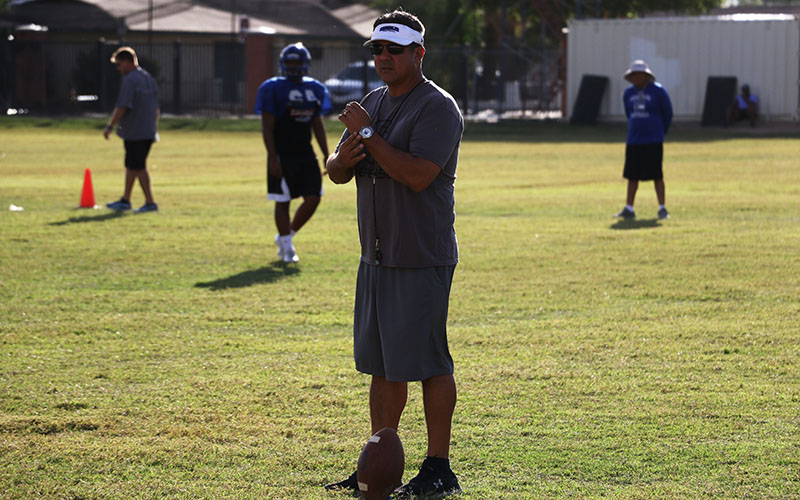 Football coach Shaun Aguano coaches his team during a practice at Chandler High School in Chandler. Coaches can now organize practices year round thanks to a new Arizona Interscholastic Association bylaw. (Photo by Fabian Ardaya/Cronkite News)

“Maybe the kid loves football but really likes basketball too, and now you’re forcing that kid to make a decision that I don’t think he needs to make,” Taylor said.

At Centennial, Taylor encourages his players to participate in multiple sports, notably track. Taylor added that when recruiters come to him, the first thing they inquire about is what other sports an athlete plays.

He noted a video in which Ohio State football coach Urban Meyer said the biggest factor when deciding on a recruit is whether the player participates in other sports, because it demonstrates that they are well-rounded athletes and not just football players.

Although Barro and Taylor are members of different divisions, they agree it’s up to them to continue encouraging students to participate in multiple sports.

Larger-scale programs such as Centennial or those in big districts such as the Chandler Unified School District, where football powers Chandler and Hamilton play, already have programs in place to encourage athletes to be more well-rounded. These programs, which include sports-specific classes, won’t feel as much of an impact.

“There’s these camps already going on,” Williams said. “It’s continuous, and that’s what the Chandler district has been doing for years because it was a mechanism that we could do.”

He said his daughter, who attends Chandler High and is on the volleyball team, has a first-hour volleyball class that counts for a physical education credit. The school offers this for all sports, essentially allowing them practice year-round.

During the season, that means that players are getting a practice session during class in addition to their regular practice session after school. During a sixth-hour football class, for example, players are around all of their coaches and the sessions are not subtracted from allowable practice time. 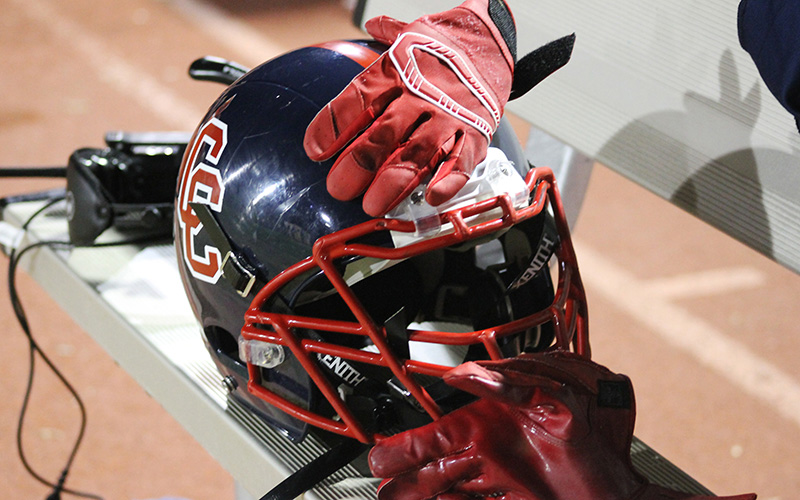 A Centennial High School football helmet is ready for use during a game in Peoria. Under a new bylaw passed by the Arizona Interscholastic Association, players can practice throughout the year. (Photo by Annaliese Leon/Cronkite News)

When the sport is in season, students can watch film or get an extra workout in before an after-school practice. When the sport is out of season, coaches can observe workouts, conditioning and weightlifting while being face-to-face with the athletes.

In a sense, it’s a practice or film session without the “practice” label.

In addition to these classes, Williams said there are numerous camps and clinics for multi-sport athletes. There are links to such programs on the Chandler Unified School District website.

“The changes I would see is that, instead of coaches wanting to hold a free camp that would have to go through community (education), they can just have practice,” Williams said of the change in bylaws.

In addition to these camps and clinics, a lot of sports run club teams in the offseason. They are prevalent in sports such as soccer, basketball, baseball, volleyball and softball.

In baseball, teams would participate in fall leagues but as club teams because they are not allowed to play on “school” teams year-round. Before the rule changed, programs walked a fine line to avoid being penalized. For instance, before the new rule, Chandler High’s club baseball team was called the Lobos (the school’s team name is the Wolves) and Basha was the Grizzlies (the school nickname is Bears).

“They didn’t do anything per bylaw that was wrong, they had a club team so that they could compete in these fall ball tournaments legally,” Williams said. “That’s been done across the state. What the new bylaw does now, is that instead of having coaches spend all this money and charge athletes all this money to be a part of this club system, they can compete in the fall.”

The rule still has its kinks that need to be worked out.

Williams said that it will be a challenge trying to keep competition from being diluted with these year-round games. He worries that it may take away from a school’s typical AIA season.

“It’s up to the local school districts and the schools to create a system on how that’s going to work within their own districts, for liability and the basic logistics of it,” he said.

There also are potential complications from paying referees and umpires for the off-season games, maintaining facilities and finding money for extra uniforms or equipment that may be needed, and which will get more wear and tear.

Williams said CUSD is already in the process of working on its own logistics regarding those matters.

“The one thing you might see come out of this is Arizona continuing to become more attractive as a destination for out-of-state transfers,” Amsden said. “Not only is the weather great to train in, but there’s an abundance of former pro and college athletes that train kids in Arizona.

“Now there are no limitations to the amount of training they can get at their own schools.”