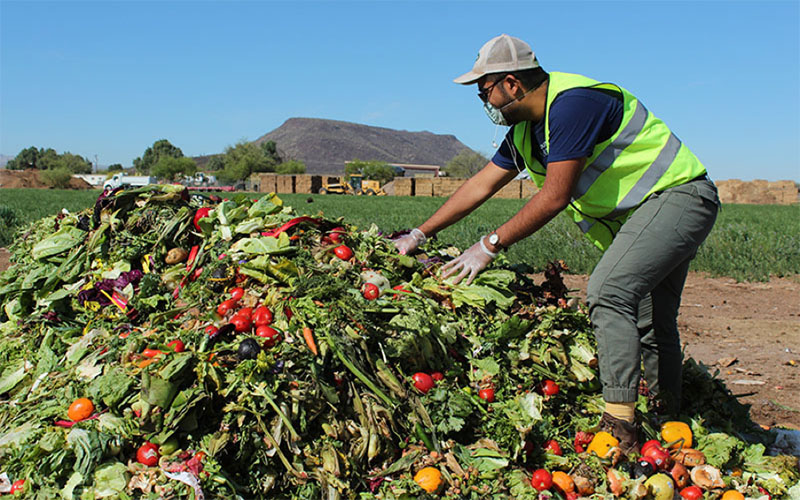 Compost Cats’ Idrian Mollaneda decontaminates a food waste pile, ridding it of debris and preparing it for composting at the composting farm in Tucson. (Photo by Kat Simonovic/Cronkite News)

PHOENIX – The U.S. Environmental Protection Agency established a goal in September 2015 to cut food waste in half by 2030.

Several states have implemented plans in efforts to cut food waste. According to the U.S. Composting Council, California, Massachusetts, Vermont, Connecticut and New York City have all introduced policies to increase organic recycling and limit the disposal of food scraps.

In Arizona, college students are taking the lead.

“We’re seeing tremendous student leadership at universities in Arizona, and across the country interested in protecting our environment,” said Margot Perez-Sullivan, an EPA press coordinator.

A student-run organization at the University of Arizona called “Compost Cats” is a prime example of student leadership, collaboration and education. 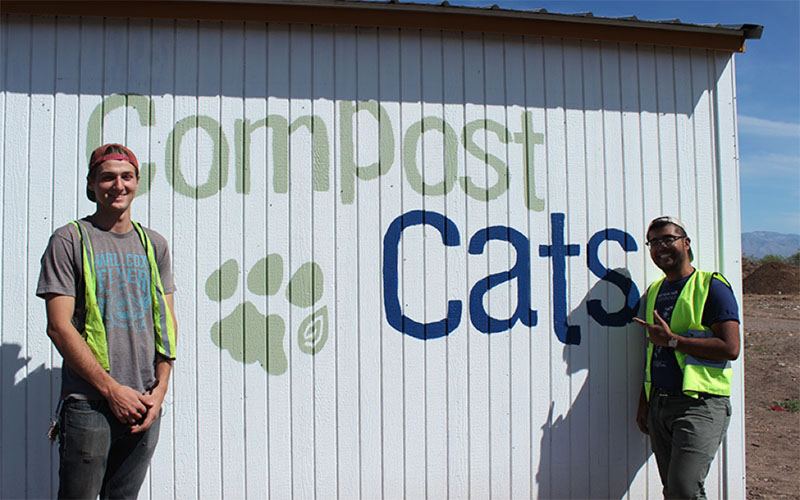 What started as a group of 14 students with an idea has grown into a multi-institutional partnership between the City of Tucson, 70 businesses throughout the city and the Tucson Unified School District.

According to Idrian Mollaneda, Compost Cats communications manager, the student-run organization diverted nearly 5 million pounds of organic material from landfills last year, which was an increase from 3.4 million in 2015. The Compost Cats are also educating K-12 students about composting.

It was enough to earn them recognition from the EPA, which awarded the University of Arizona a certificate of appreciation and a 2015 Regional Food Recovery Challenge Award. All three Arizona state universities made the list of 20 institutions from across the country to be recognized with the award.

“The strongest strategy I think that we have adopted that has garnered us so much success is fostering student leadership. Compost Cats is an entirely student-run organization that relies on the dedication, passion and intelligence of student leaders,” Mollaneda said. “I think that amazing things can happen when you trust students to carry out their vision, and I think our record proves it.” 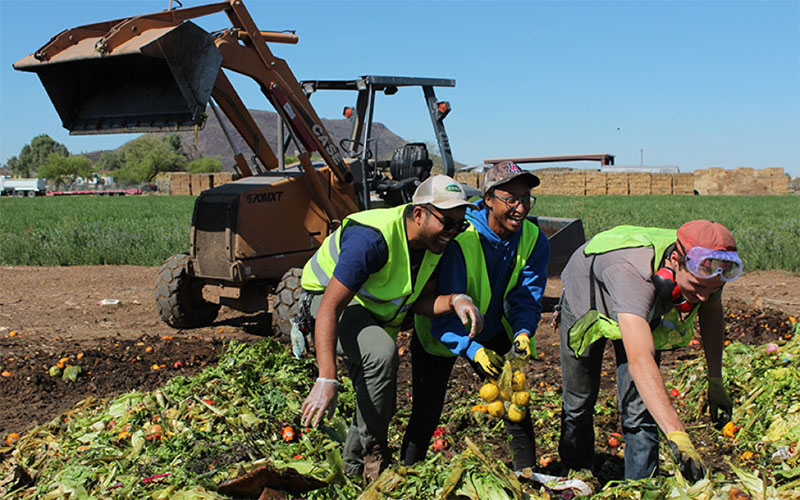 A deep history at UA

UA has been actively involved in waste analyzing for decades. One of the university’s most renowned successes from the 1970’s, The Garbage Project, is still discussed by experts in sustainability and public health.

The project stemmed from professor William Rathje and his students. They analyzed trash, compared the findings to U.S. Census data, and found that there was more food waste going to landfills than previously thought.

Doctor of Food Systems Sustainability from the Johns Hopkins Center for a Livable Future, Roni Neff, called the project “absolutely fascinating, and still applicable to our future environment.”

Step 1: The City of Tucson drops off a truckload full of food waste that is piled high and waiting to be filtered by the Compost Cats. (Photo by Kat Simonovic/Cronkite News)

Step 2: The Compost Cats sift through the food waste and remove non-compostable materials such as plastic. (Photo by Kat Simonovic/Cronkite News)

Step 3: The food waste is moved by a tractor to a larger mixing pile with manure and yard scraps. (Photo by Kat Simonovic/Cronkite News)

Step 4: The mixed pile is watered frequently by a watering truck to ensure that the compost stays hydrated. (Photo by Kat Simonovic/Cronkite News)

Step 5: After the compost pile is watered down, it is aligned into windrows (about 5 feet wide, 3-4 feet tall and 30-50 feet long). These windrows are turned and watered regularly. (Photo by Kat Simonovic/Cronkite News)

Step 6: After the food scraps have been fully composted, the compost is run through a large sifting machine that separates it. (Photo by Kat Simonovic/Cronkite News)

Step 8: The last step before distribution is packaging. The compost is packaged into 1 cubic foot bags or sold in bulk by the cubic yard. (Photo by Kat Simonovic/Cronkite News)

According to the EPA, Northern Arizona University was acknowledged for educating the community about the EPA’s food packaging reduction toolkit and launching a food recovery network.

More recently, a student-led group at NAU began to collaborate with Sodexo a food company. The collaboration is working on recycling food waste within the university’s dining services and has received a $60,000 grant from NAU’s Green Fund to set the collaboration in motion.

Arizona State University’s Walton Sustainability Solutions Initiatives has teamed up with the Phoenix Parks and Recreation Department to conduct a two-year study of using food scraps and yard waste to produce soil for nine city parks. Compost is applied to select study areas and will be analyzed by soil health, water usage and other methods.

According to the study, yard waste and food waste make up 45 percent of Phoenix’s solid waste stream.

In the first year of the Phoenix Turf Compost Study, 449 cubic yards of compost were applied across 8.21 acres at the nine participating parks.

Since the study is over a two-year time span, the Phoenix Parks and Recreation Department is not able to release any complete conclusions. However, according to a city council report, the compost has substantially improved turf quality in the first round of observations.

With the efforts of Arizona universities, the EPA confidently takes steps toward its food recovery goal of 2030. Students have lead the way to a more sustainable form of waste processing.

“Universities have been great proponents of the food recovery challenge by directly reducing wasted food, partnering with community organizations, and – most importantly – educating college and university students about reducing food waste,” Perez-Sullivan of the EPA said.