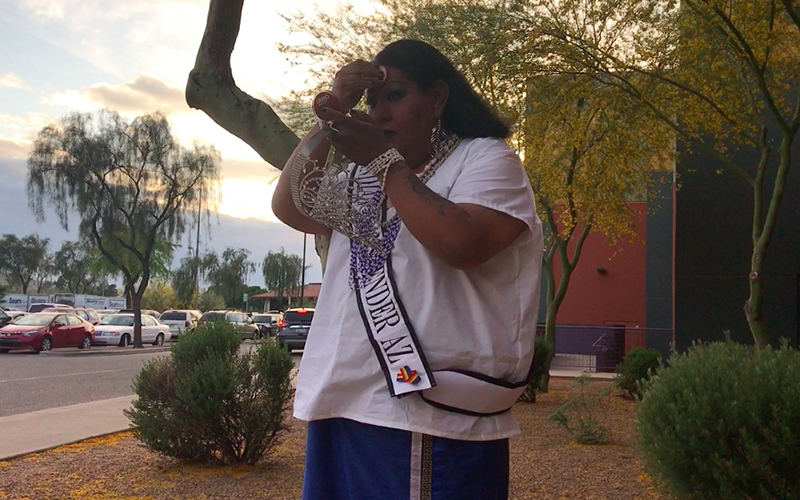 Kay Kisto, who is two spirit and transgender, applies makeup outside Arizona Mills in Tempe, Arizona on March 31, 2017. (Photo by Jenny Ung/Cronkite News)

“It was a liberating day, coming out in broad daylight in full drag,” said Kisto, who is transgender and lives as a woman.

This was especially so, Kisto said, because she was coming out as gay — and also as “two spirit.”

Across American Indian communities, the two spirit designation has long accepted more orientations than just male and female. Many who study Native history say two spirit people traditionally held important roles in their home communities, but as Christianity and conservative values spread, two-spirit people have come to face the same discrimination and hardships as gender nonconformists in mainstream society. Today, thanks to grassroots movements, two spirit people are finding encouragement and support through activism and education.

“Prior to colonialism, individuals that identified as two spirit and who are outside of the binary gender, they contributed to the community,” said Trudie Jackson, who studies tribal governance at Arizona State University and identifies as two spirit. “The two spirit community across America are rallying together to have a place back in the circle within tribal communities.”

A few years ago, Kisto realized there was no proper support system for LGBT Native Americans. For those in the Gila River Indian community, they would stay in the closet or come out and face name-calling, she said.

On reservations, two spirits are regarded in various ways. Not every tribe recognizes the term “two spirit,” which can also mean being possessed by an evil spirit. For some, other words are used that can be seen as degrading. Kisto says her people — the Akimel O’odham — use the term “Wik’ovat,” which means “like a girl.”
In the past, Kisto’s community didn’t acknowledge two spirits and Kisto said she realized there was a division in the tribe.

“Half of them said two-spirit people were never here, you either were a man and did man things, or a woman and did woman things — no in between, no nothing,” Kisto said. “The half that acknowledges there were two-spirit people before colonization thought they were sacred because they were able to understand both the masculine and the feminine.”

Kisto joked around with friends about starting a gay support group on the reservation, but many encouraged her to actually create the group, which is now called HOPE (Helping O’odham Pursue Equality).

Her first attempt at HOPE failed in 2009, mainly because it didn’t have a goal. But in 2013, she restarted the group and succeeded, doubling the membership from 15 to 30.

Other efforts at bringing acceptance to the two-spirit community include pride pageants.

In the San Carlos Apache Tribe, two spirits were “practically non-existent,” said Timothy “Twix” Ward, a two spirit. “Not a lot of documents was kept by two spirit people in our tribe, so a lot of the history that two spirits have would have been passed down by elders — but it was kind of a hush-hush issue because of a lot of the Christians that were here.”

He wanted to educate the community about two spirits and create a safe environment — including for those who don’t want to identify as two-spirit.

“Some are fine just being LGBT, which is perfectly fine, but I just wanted the two spirit side as an option for those who were more traditional in their lifestyles,” Ward said.

Ward said he was concerned about suicide rates among two spirits. “They didn’t have anything to turn to or they got so much hate that they hated themselves. That’s one of the reasons why I wanted to bring back those roles,” he said.

Ward specifically brought in tribes that already had support groups in their communities in order to show “that it can be done, our community can exist with two spirits in a positive way.”

The pageant was a success, which, he said, surprised him. The gym was jam-packed. Even teenagers under 18 got permission from their parents to come to the pageant to “experience the different aspects of being gay or being two spirit.”

“It just brought pride to them — that’s the feedback I got from it,” Ward said.
Ward wants two-spirit people to not just be respected, but to also have respect for themselves.

“Two spirits are still here,” he said. “We are still a respectable group of people. That part of our history that we wish we still had, we are slowly bringing back.”

Trudie Jackson hopes to use her knowledge to provide education to her Navajo community about LGBT and public health issues.

When she was pursuing her bachelor’s degree in the Native American Studies program, she noticed the lack of two spirit and LGBT representation in her classes.

“Being the only trans person in the program, I really get an insight of tribal governance, of how policies are made, of how tribal government used the Christianity values to downgrade individuals that may identify with the LGBT and two-spirit community,” Jackson said.

Jackson hopes to look at tribal governments and leaders to educate them and encourage them to develop inclusive policies and address why the Native American transgender and two-spirit community is being overlooked and underrepresented.

As the nation watches states grapple with transgender rights involving legislation over where such people could legally use public restrooms, the issue is more complicated on tribal grounds.

“This has kept me motivated to make a difference in my community,” she said, “and to be a voice for the community, so that the American Indian trans community will finally have a place at the table.”

Click through the photo gallery to learn more about one of the origin stories of how two-spirit people came to a village.

Medicine people and older members of the tribe pass down oral tales about the two spirit people. There was once a community that had gotten sick. The village asked the Creator to help heal the people. Vicki Quintero, a two spirit, shows off her Miss Apache Diva sash at Tumbleweed Park in Chandler, Arizona on April 13, 2017. (Photo by Jenny Ung/Cronkite News)

A gust of wind from each direction came and began swirling around. From the whirlwind came a figure who started to talk to the village members. Quintero discusses her experience as a two spirit within both an urban community and her tribal community at Tumbleweed Park in Chandler, Arizona on April 13, 2017. (Photo by Jenny Ung)

The figure helped the men with their troubles as well as the women. However, the figure’s gender was ambiguous. Quintero, who is the winner of the 2017 Miss Apache Diva Pageant held on the San Carlos Reservation in January 2017, talks about her title at Tumbleweed Park in Chandler, Arizona on April 13, 2017. (Photo by Jenny Ung)

The figure was able to change its characteristics to look like a man when interacting with the men, and the same with women. Quintero talks about how accepting Northern Arizona State University was of her identity when she was in college at Tumbleweed Park in Chandler, Arizona on April 13, 2017. (Photo by Jenny Ung)

The medicine people came to the conclusion that the figure wasn't a man nor a woman, but it was a "two-spirit" healing being sent from the Creator to help the village people in times of need. Quintero discusses her feminine role within the Apache tribal community at Tumbleweed Park in Chandler, Arizona on April 13. (Photo by Jenny Ung)