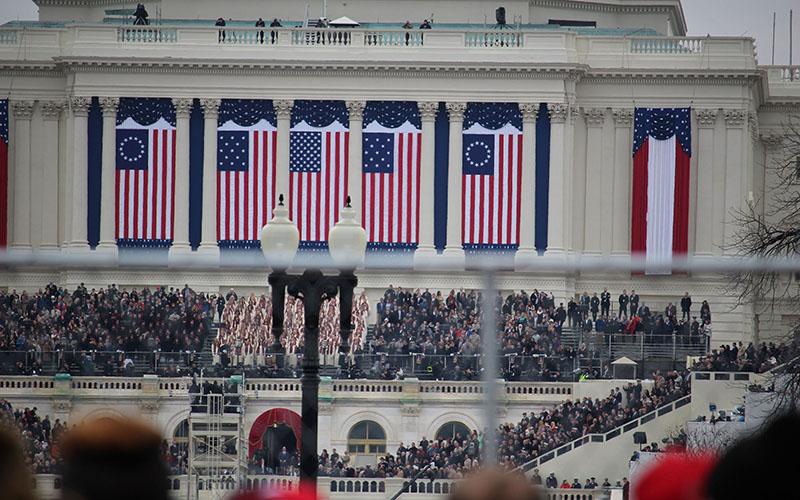 The West Front of the Capitol during the inauguration of President Donald Trump, as seen from the National Mall. The Trump inaugural committee raised a record $107 million toward the swearing-in and associated events around Washington, according to the Federal Election Commission. (Photo by Kendra Penningroth/Cronkite News)

The bulk of the Arizona money came from Godaddy.com founder Bob Parsons, who gave $1 million, while the other 12 came from businesses and individuals – some of whom were not even aware that their purchase of Trump memorabilia were being counted toward the inauguration

“It wasn’t a donation,” said Ioanna Morfessis, a Phoenix resident listed as one of the donors. “I bought five inaugural plates, $50 each.”

Calls to others who listed Arizona there address went to businesses that said they had never heard of the donor. The Huffington Post reported this week that the inaugural committee conceded errors in its filings, and experts said the Arizona problems are common in campaign financing reports.

The FEC last week released a 500-page list of donors for the 58th Inaugural Committee, far less than the 5,425-page report from Obama’s second inauguration. But Obama raised just $44 million compared to the $107 million reported by Trump.

Daniel Weiner, senior counsel for the Brennan Center’s Democracy Program, said Trump was able to raise so much from relatively few donors but doing away with contribution caps that previous inaugural committees had imposed.

“The reason he (Trump) was able to raise so much money was because unlike presidents Obama and Bush, he didn’t adopt any of the voluntary limits,” Weiner said. “He took unlimited corporate donations.”

From Arizona, that meant he could accept $25,000 from the Apollo Education Group and a General Motors donation listed at $250,000 – and Parson’s $1 million. A spokeswoman for Parsons said that he would not be available to comment on his Trump inauguration donation.

Brendan Glavin, the data manager for the Campaign Finance Institute, agreed with Weiner in that not capping contributions helped Trump, who may have been boosted by another factor as well.

“Trump as the Republican nominee, there was a lot of hesitancy to get behind him now,” Glavin said. “So he wins and you have this inauguration.

“That’s an opportunity, perhaps, for people who didn’t get behind before the election, it’s opportunity for people to show support and get on board now that he won,” Glavin said.

That may not have been the case with every donor. One donor listed in the the FEC report listed the address of a physical therapy clinic in Scottsdale, but people who answered the phone there said they had never heard of him.

Weiner said that campaign donations can be controversial, so cases like that are not unheard of.

“Maybe they’re worried about someone showing up and throwing a brick at them,” Weiner said of some donors. “It’s a lively debate going on about whether those are valid concerns, but they’re certainly concerns people express.”

“People should always be aware if you’re purchasing an item from a campaign, maybe you hate the candidate but your grandmother really wants a commemorative Donald Trump plate,” Weiner said. “What you pay for that plate may be reportable.”

While the errors reported may be common, Weiner said the fact that there are problems with campaign finance reporting “is not to excuse it though, because it is a concern.”

“We really should have a better system for making sure the information that is reported is accurate, and to some extent is that the FEC has fallen down on the job in that respect,” he said.