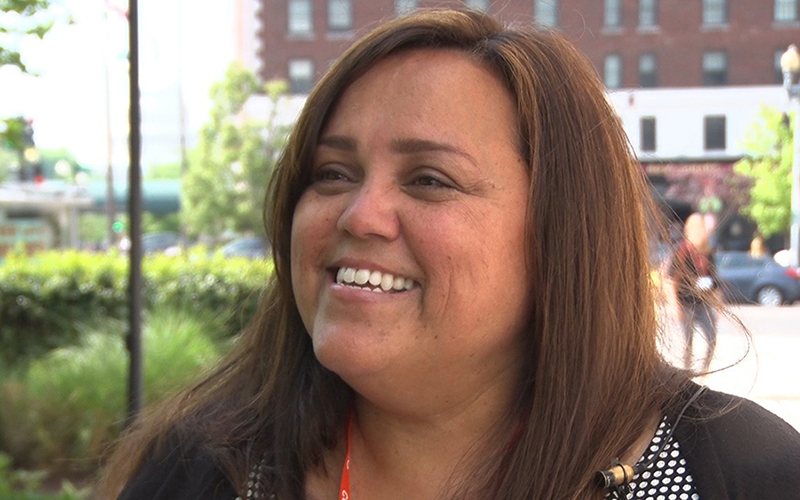 Encanto Elementary School teacher Michelle Doherty, the Arizona 2017 teacher of the year, said she tried to bring the concerns of her students and fellow teachers to Washington and the White House for teacher of the year gatherings. (Photo by Marisela Ramirez/Cronkite News)

WASHINGTON – It’s a long way from the first-grade of Encanto Elementary School in Phoenix to a meeting in Washington with some of the nation’s most powerful government officials, and teacher Michelle Doherty admitted Thursday that she was a little overwhelmed.

“My emotions have been up and down, up and down,” said Doherty, Arizona’s 2017 teacher of the year, a day after a trip to the White House.

“To see everything I’ve read about, teach to my kids, is actually here,” said Doherty, a first-time visitor to Washington.

The 23-year veteran of teaching, all at Encanto, took in the sights but her Washington visit wasn’t all vacation. She took part in a week of meetings by the Council of Chief State School Officers and made a point of relaying the voices and concerns of students and teachers in Arizona’s public schools.

And that opportunity presented itself late Wednesday afternoon at the White House.

Doherty and other state teachers of the year were invited to meet with President Donald Trump and Education Secretary Betsy DeVos in the Oval Office.

While Doherty appreciated the five-minute speech Trump gave the teachers, she wished she had been given the opportunity to share her own words with the president.

“Support public education,” she said Thursday. “Listen to teachers, we have a strong voice.”

Doherty said she feels that public school teachers have been pushed out of the discussion over education policy and replaced by people who have “never been in the classrooms.” She stressed that “we cannot have others making the decisions” who “don’t know the impact of the policies they put into place.”

Despite not getting the chance to have a discussion in the Oval Office, Doherty said she was able to get to DeVos briefly.

“I invited her to Arizona already, I said we could go and have a discussion,” Doherty said. “I gave her my card and I said, ‘Please ask questions and I would love to sit down and talk.'”

Doherty worries that the Trump administration is straying away from assisting public education but remains “hopeful” after hearing that DeVos had appreciated speaking with the teachers.

But a focus on public education isn’t the only concern that she has. When Doherty told her first-grade class that she was going to visit Washington, one student asked, “Ms. Doherty, do you have your green papers?”

“They were worried because they thought once I met the president that I was going to be deported,” said Doherty, who is a U.S. citizen. “And that’s the mind of a 6- or 7-year-old.”

Doherty hopes that by sharing these stories with officials and with the other teachers she met in Washington, the discussion can eventually lead to a solution.

“Maybe there is one story out there that will resonate with that one person that can make a difference, that has a stronger voice than us, that is sitting at that table because we’re not,” Doherty said.

“I asked for all of their autographs,” she said of her students, “because I said, ‘I’m the Arizona teacher of the year because of you.'”