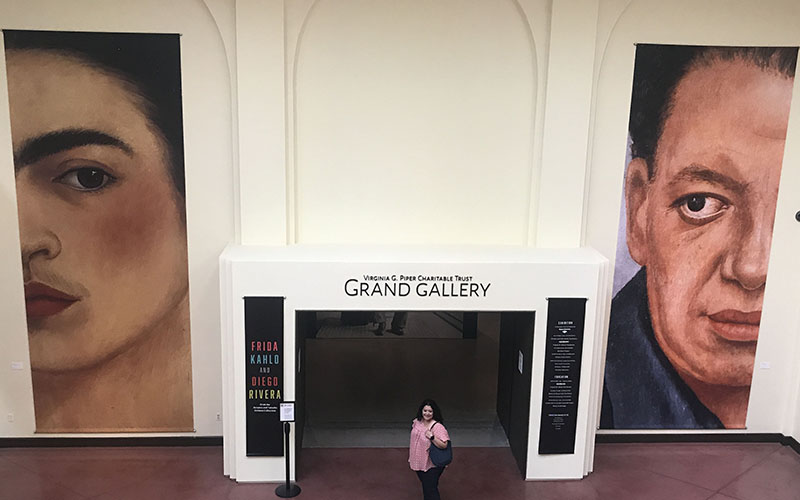 Visitors have come from around the world to visit the Frida Kahlo and Diego Rivera exhibit at the Heard Museum. (Photo by Ryan Santistevan/Cronkite News)

PHOENIX – The Heard Museum is now recognized for more than being one of 31 of Phoenix’s points of pride. It is also the only North American stop on a world tour for the Frida Kahlo and Diego Rivera exhibit.

The exhibit is offering tourists and locals alike the opportunity to admire artwork by the two famous Mexican artists. The 33 pieces from the Jacques and Natasha Gelman Collection will be on exhibit at the Heard until August 20.

The process to host the exhibit began in February of 2016. David M. Roche, director and CEO of the Heard Museum, was approached by his friend Robert R. Littman, who told him that another venue had to cancel so the collection was available. 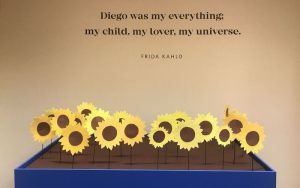 The Frida Kahlo and Diego Rivera exhibition is at the Heard Museum, the only North American stop on its tour. (Photo by Ryan Santistevan/Cronkite News)

According to a New York Times article, Jacques Gelman wrote in his will that when he died, the collection would be given to Littman. The Gelmans were Mexican-based European emigres who were friends of the artists. Walking through the exhibit, there are two large portraits of the Gelmans by Rivera with a smaller portrait of Natasha in the middle, painted by Kahlo.

Roche approached the curatorial committee at the Heard about hosting the exhibit. It was a unanimous decision and everyone was thrilled at the prospect, according to exhibit curator Janet Cantley.

Cantley said the exhibit has drawn large numbers to the museum. On April 11 when the exhibit opened, Cantley said attendance was 950, a high number for any other Tuesday. The following Saturday, she said 2,000 people attended the exhibit, a number twice what the museum would expect at this time of year.

“I think Frida Kahlo has become such an international icon,” Cantley said. “People come to Frida in a variety of ways. Some it’s her fashion, her style, her hair. I think some people come because they’ve seen her paintings and realized she’s talking about women’s issues and experiences.”

By the end of April, the museum generally sees its numbers wind down. Cantley predicts that this summer there will be more local and out-of-state visitors to view the exhibit.

Sandy Vaillancourt, an artist from Santa Fe, N.M., said visiting the exhibit was one of three stops she wanted to make while in Phoenix.

“My work is not like Frida’s — no work is like Frida’s,” Vaillancourt said. “I admire it. I think it inspires you.”

She said she doesn’t know who is documenting what’s happening in Mexico these days the way that Diego Rivera and Frida Kahlo did in their day. She said she feels it’s an artist’s place in society to document what’s going on around their world. She said it can make you feel upset or happy.

Standing near the entrance of the exhibit, there is a huge piece that lines the wall. It is by New Mexico artist Tony Abeyta. Vaillancourt said his daughter went to school with her daughter and that he is well known in the Arizona and New Mexico artist community.

After seeing Abeyta’s piece, visitors walk into the Virginia G. Piper Charitable Trust Grand Gallery and are welcomed by a blown up photo of Kahlo and Diego together. Guests are advised to follow the wall to their left and see some of Rivera’s earlier work. The next wall displays the portraits of the Gelmans.

Continuing on there is a wall with two pieces on it, Rivera’s Calla Lily Vendor and Sunflowers. Walking around, soon Kahlo’s portraits like Diego on My Mind and Self-portrait with Monkey are apparent.

The exhibit also features a chronological look – in photos – of both Kahlo and Rivera. The first starts with Kahlo family photo and ends with her in a coffin. The exhibit itself has more than 50 photographs taken by Edward Weston, Lola Álvarez Bravo, and Frida Kahlo’s father, Guillermo Kahlo.

Traveling eight hours in the car, Eiko Miki and her husband Shinji Usey decided to drive straight over from New Mexico once they found out that the only stop in the U.S. was a neighboring state.

Miki said she first read about Kahlo in a magazine years ago. She said she has seen many other exhibits around the U.S. featuring Kahlo but notes the exhibit at the Heard was a delight.

“My very favorite piece is ‘…Monkey,'” she said. “It always has been. It’s my all-time favorite. I don’t know why but I really love animals and she does and she always had monkeys.”

Miki said they looked at the other cities but couldn’t find another time they could see it.

“I am a long time fan of Frida Kahlo,” Miki said. “She’s one of my most loved artists.”

The exhibit also features clothing and jewelry of the style and region that Kahlo chose to wear.