LOS ANGELES — Later this month, Zach Banner’s name will be called at the NFL Draft, whereupon he’ll leave the college comforts of Southern California and begin a life of professional size and skill.

Banner is a 6-foot-9, 340-pound offensive tackle on the USC football team, is a mountain of a man that will make his living standing in front of some of the world’s largest athletes.

But in his last days as a Trojan, Banner and his teammate volunteers stood, not in the face of helmeted behemoths, but on yoga mats, twisted into poses alongside impoverished youth inside USC’s private athletic facility.

When the tiniest hands in the room reached for the sky, so did the biggest. When it was time to stand on one foot, players helped buoy their neighbors.

During the downward dog pose, an instructor encouraged the participants to make their best “dog bark.” Her students for the day, elementary school students and football players Nico Falah and Jackson Boyer, howled together before breaking into grins.

To conclude the session, kids from Los Angeles’ After-School All-Stars and Skid Row’s School On Wheels laid on their backs, closed their eyes and found their point of serenity. The players did the same, and with their breaths synced to the little lungs around them, they resembled boulders in a pebble garden. 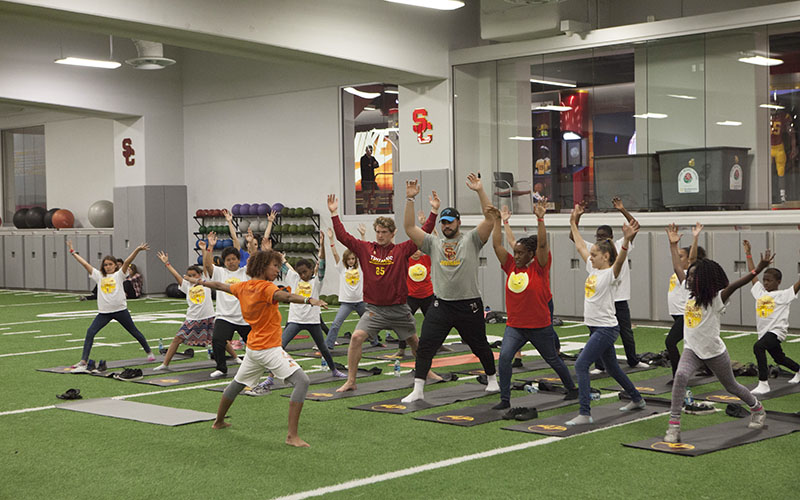 The kids, including those that instructors say are frequently hyper or violent, were stone-still.

This rare moment of peace with a future that has similar calm in it, is the goal of Trojan Zen, a yoga event that is the product of Trojan Outreach, Uprising Yoga and Banner, recipient of the USC Community Service Football Award.

Trojan Outreach is the community outreach branch of USC Athletics and Uprising Yoga is a non-profit that sponsors yoga life-skills programs for incarcerated youth and underserved communities.

The outreach program wanted to give an experience, and self-control tools nobody can rob from them, to those that have “so very little,” as Banner put it.

“A lot of our families come from domestic violence, eviction, being laid off,” said Allison Maldonado, an instructor at School On Wheels’ Skid Row Learning Center.

“We deal with students that are being uprooted, they’ve lost their home. Toys, anything they had before, is now taken away. It’s very difficult because they have a give-up mentality or a learned helplessness where they don’t have that grit to try,” she said. “They just have a fear that things are going to be taken away or messed up.”

McCall Hall, director of community outreach for USC Athletics, said youth in the program can get a semblance of normalcy from it.

“(They’re) trying to make something of themselves,” Hall said. “They go to school every day and don’t know what they’re going to return to. What is homework to a kid that doesn’t have a home?”

Faculty at the Skid Row Learning Center frequently chaperone their students on the afternoon walk to the Union Rescue Mission, a half-mile away. Sometimes the mission is full or closed, at which point the students, many of whom don’t have a functioning parent, have to find somewhere else to lay their heads for the night.

Yoga may not be four physical walls and a roof, but according to Gordon Ogden, a yoga teacher and event planner for Phoenix-based Walter Yoga, the practice can provide the structure for development and progress.

“When we teach the body to be still, you start to understand that union between mind, body and breath and that starts to ripple throughout your life and you become happier and in control,” Ogden said.

“Yoga teaches kids that through practice, not only they can make themselves feel better, but they can start to see improvement and changes that happen over time,” Ogden said. “That builds confidence, strength, body awareness and (positive) body image and lowers stress. 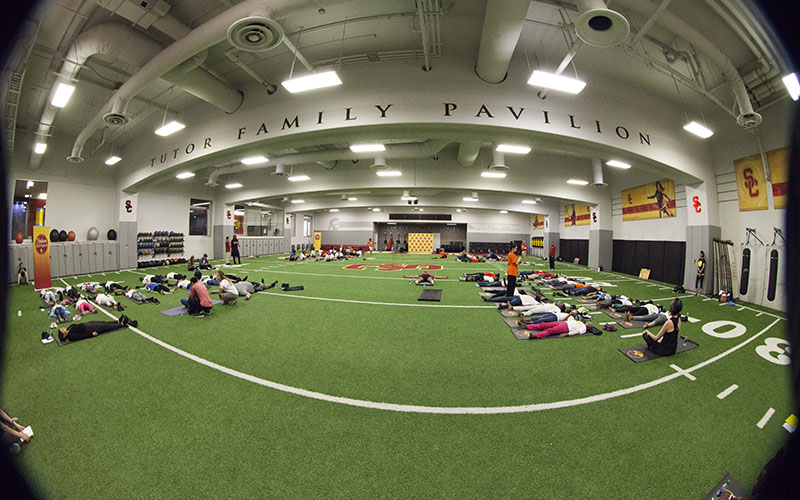 Improvement, and being in the right state of mind to realize and give themselves credit for that improvement, is crucial for kids, Ogden said.

“Whenever you can help kids understand that quieting the mind is really the goal, it gives them the tools to manage their stress,” Ogden said.

Maldonado would love a quieter mind for her students.

“In the shelter, one room can have two or three families in it. Imagine trying to find peace in that? They need whatever skills they can take,” she said.

Ogden often practices at picturesque sites like South Mountain in Phoenix and on cliffs in Sedona, places where the air breathes calm and distraction is minimal. At other times, he leads classes full of laser beams and music, testing the focus and pushing the present to his students. Sometimes he’s with his daughter Willow, who stars on her dad’s popular Instagram account @GordonOgden. Whether he’s stretching in front of classes of strangers or doing some acro-yoga (two-person poses) with his daughter on his back, Ogden emphasizes the importance of consistent practice, which allows the student to rise above any setting and find inner peace.

This is why Trojan Outreach will pay for five additional large group yoga classes at School On Wheels’ Skid Row Learning Center and gave a yoga mat to every child. It’s about turning an experience and a learned skill into a healthy habit.

The grade-schoolers will not be the only Trojan Zen participants continuing to take strength in warrior and tree poses.

Banner has added yoga to his daily pre-draft workouts. It’s helped the all-Pac-12 offensive tackle lose 40 pounds and clear his mind as he prepares for the NFL. Seeing the way yoga helped him calm down and find himself amid distraction pushed him to share his new focus with those that need it most, he said.

Maldonado hopes her students can develop the same self-control and sense of identity.