PHOENIX – Valeria Rodriguez was 18 years old when she found out she was undocumented.

“I was enrolling for college and thought I was an American citizen because I had documents,” she said.

But those documents turned out to be fake, the legacy of an unscrupulous lawyer who took advantage of her mother when she gave birth to Rodriguez in Mexico.

So Rodriguez, 24, was thrilled when President Barack Obama initiated DACA (Deferred Action for Childhood Arrivals) and she was able to take advantage of the opportunity to go to college.

She enrolled at Mesa Community College (MCC), and due to her activism as a DREAMer (Development, Relief and Education for Alien Minors), she was connected to Ezequiel Santos, another DACA student at the college.

Santos, 25, was born in Sonora, Mexico, and migrated with his family to the U.S. when he was 2 years old. 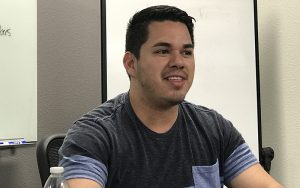 Born in Mexico, Ezequiel Santos migrated to the U.S. with his family when he was 2 years old. He is a DACA recipient student at Mesa Community College, where he has started the first club for undocumented students in the Maricopa Community College District. (Photo by Mindy Riesenberg/Cronkite News)

“My family is Mormon, and we’d travel to the Mesa temple to visit because it was the closest one to us,” he said. “We overstayed our visas because we were suffering financially back home.”

Santos explained how his family didn’t speak about its undocumented status, and that he didn’t even know he was undocumented until he was in high school.

By that time, he realized there were many other undocumented students in the area. When he enrolled at MCC he said he thought there would be a DACA club already in place.

But there wasn’t, and Santos took it upon himself to find a way to provide information for DACA students and their parents.

“I knew there were resources that I could obtain, but I didn’t know how to ask for them or what to ask for,” he said.

At the same time Santos was thinking about starting a club, Monica Margaillan, MCC’s coordinator of community outreach, was hoping to develop a hub to provide legal, counseling and scholarship information for undocumented and DACA students.

MCC is considered an emerging HSI (Hispanic Serving Institution), with a student body comprised of about 23 percent Hispanic students, some of whom are undocumented DREAMers.

“We had nothing on our website for DACA students, and there was no place for students to go to find these resources,” she said.

Margaillan did research to see what other schools were doing and found DREAMzone, a group that holds workshops on how to provide supportive educational environments for undocumented students. 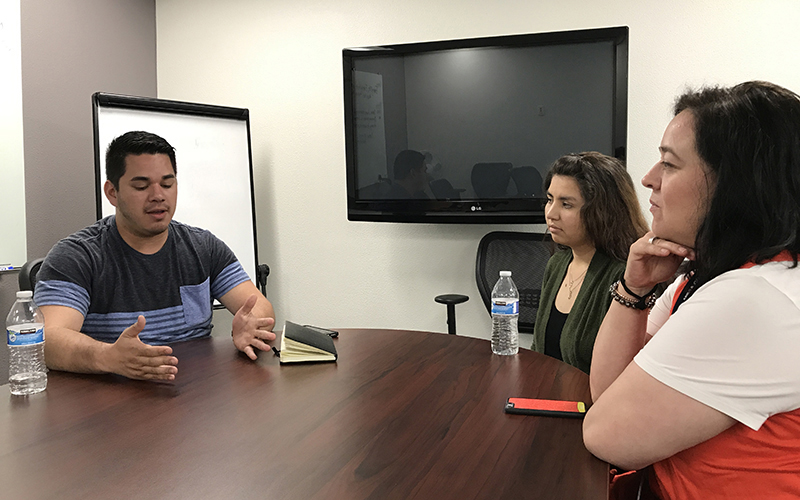 That’s where she met Santos, who was a student panelist. The two eventually joined forces with Rodriguez through a mutual friend to create MUST (Mesa Undocumented Students Thriving), the first club for undocumented students at MCC.

“I am not the kind of guy who would start a club, but I have this fire in me because of what’s going on with ICE raids and issues with DACA students,” Santos said.

“A lot of people are scared to go out and get information because they don’t want to be outed,” he said.

Rodriguez said she hopes that MUST leads to MCC adopting policies to become a sanctuary campus for undocumented students. It means MCC would not allow Immigration and Customs Enforcement (ICE) officers onto campus without a warrant, would not enforce immigration law, and would not share student immigration status with ICE.

“I’m hoping students will feel that they’re safe on this campus,” she said.

MUST plans to assist MCC with college recruitment at local high schools, with the intention of helping those undocumented students become more comfortable sharing their stories and continuing their education.

“It’s hard, but you need to talk about it,” Rodriguez said. “Coming out and letting people know, you get more support.”

Another mission for MUST is to educate communities who don’t know much about DACA students.

Rodriguez has been teaching some of her instructors and classmates about DACA and said she feels more support now because of it.

“A lot of people fear saying publicly that they’re undocumented,” said Vasthy Lamadrid, 20, one of the founders of USEE, who was born in Mexico and brought to the U.S. at age 6. “But knowing others have our backs helps.” 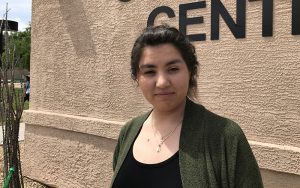 Valeria Rodriguez thought she was a U.S. citizen, but found out she wasn’t when she enrolled in college in 2011. Her mother had been taken advantage of by an unscrupulous lawyer, who gave her fake papers for her daughter. (Photo by Mindy Riesenberg/Cronkite News)

ASU currently has 180 DACA students, and Lamadrid said she hopes that more potential students who are undocumented come out of the shadows to take advantage of the resources and support what USEE offers.

Until recently, most DACA students were cautiously optimistic that they were safe from deportation under the new administration. However, last week it was revealed that the first undocumented immigrant with active DACA status had been deported to Mexico in February.

“That could easily be me,” Santos said. “DACA was able to provide me stability, a sense of protection and confidence in myself and it’s all being taken away.

“I want to empower students at MCC who just don’t know what to do, how to ask for help or are still in the shadows,” he said.

Santos said he believes MUST is now more important than ever.

“We’re not asking for much – we just want to be able to succeed,” he said.