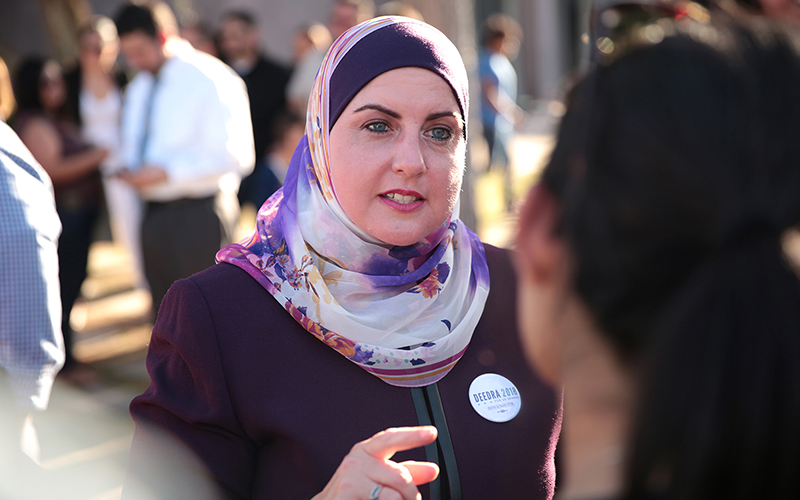 Democratic Senate candidate Deedra Abboud, an independent until recently, said she thinks her background will make her an attractive to independent voters and to those who still feel bruised by the divisiveness of the 2016 elections. (Photo by Gage Skidmore/Creative Commons) 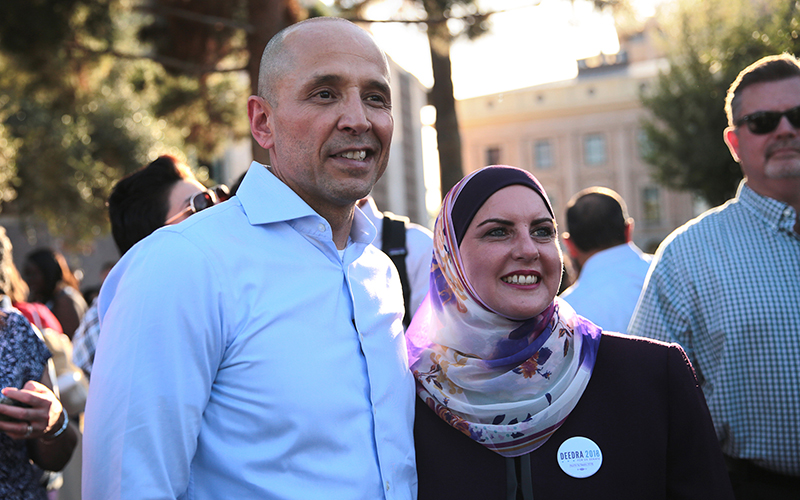 Deedra Abboud, here with Democratic gubernatorial hopeful David Garcia, became the first Democrat to announce a challenge to Republican Sen. Jeff Flake in next year’s election – although most analysts expect she will not be the last. (Photo by Gage Skidmore/Creative Commons) 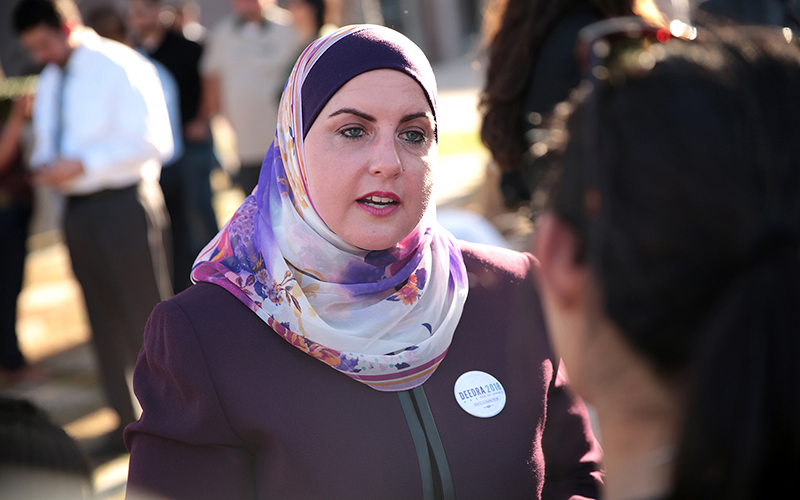 On paper, Deedra Abboud is not a conventional candidate, with little experience campaigning or raising campaign dollars. But, a community activist, Muslim and attorney, said she believes her background can appeal to disenchanted voters. (Photo by Gage Skidmore/Creative Commons)

WASHINGTON – All the things that analysts say present a political challenge for Deedra Abboud – her lack of political experience and party ties, her Muslim faith and liberal activism – are the things she embraces in her race for Senate.

Abboud, a 45-year-old Phoenix lawyer and community activist, became the first Democrat to throw her hat in the ring for the 2018 race for Republican Sen. Jeff Flake’s seat, announcing her candidacy April 10 – shortly after the longtime independent registered with her new party.

Her independence and her activist bona fides – Abboud ran the Arizona chapter of the Council on American-Islamic Relations in the early 2000s and practiced immigration and estate law – is what will let her transcend party lines and rhetoric and reach undecided voters who feel disenchanted with party politics, she said.

“People want something to be excited about,” Abboud said. “There’s nothing more exciting than someone running with the passion, the honesty, who has worked in the trenches, who has worked with different communities.”

But analysts on both sides of the aisle say it will be an uphill battle.

Although she was the first Democrat to enter the race, she likely will not be the last: Analysts have pointed to a potential bid by Rep. Kyrsten Sinema, D-Phoenix, a moderate who had $2.8 million cash on hand in her latest Federal Election Commission filing.

If she can survive the primary, she will likely face the incumbent Flake – who has proved to be a capable fundraiser in the past – or his GOP primary challenger Kelli Ward, an archconservative who declared her candidacy last year, shortly after losing a bid to unseat Sen. John McCain, R-Arizona.

Abboud, who filed her campaign but has yet to file a finance report with the FEC, said she has been in talks with unions and other groups about garnering support, but did not otherwise discuss her finances.

“She’s going to have to raise a lot of money, and that’s difficult when you’re relatively unknown,” said David Wells, a political science professor at Arizona State University who worked with Abboud in her career as an activist. “She’s not been active in the Democratic Party, and as a consequence she’s not been tapped into the state political party network.”

Abboud said she subscribes to the “values of the Democratic Party,” but has voted for Republicans in the past if she felt they would best serve Arizona’s interests.

“The independents have been totally ignored by both parties, and that is one of the things I want to change,” she said. “I’m not afraid of tough conversations. I’m not afraid of being uncomfortable.”

But high talk can only carry a liberal candidate so far in a state that’s elected only Republican senators for more than 20 years.

The key to her success may lie in her comparability to another left-leaning independent who thrives on shirking establishment politics, Vermont Sen. Bernie Sanders.

“I think she would have to have a Bernie-esque type of approach, where she would catch fire amongst the millennials and other traditional Democrat groups, where they would see her as a fresh voice,” said Jaime Molera, a partner at Phoenix public affairs firm Molera Alvarez. “And you never know, sometimes you catch lightning in a bottle.”

But if she were to clinch the nomination, Molera said the platform that carried her in the primary might not play as well in the general election.

“For every action, there’s a reaction,” he said. “I think there’s a lot of Democrats who are more centrist, and they may not be as comfortable with someone coming from more of the left side of the platform.”

But as political obstacles go, Abboud’s faith – she wears a hijab – may prove difficult for some voters. She said it would be her “number one challenge.”

“In a perfect society, it shouldn’t (be a factor), but unfortunately what we’re seeing is an unprecedented spike in anti-Muslim sentiment, and an overwhelming rise of bigotry against all minorities,” said Ibrahim Hooper, a spokesman for the Council on American-Islamic Relations.

But, as with much else in her campaign, Abboud said her religion can promote dialogue about prejudice and Muslims in American life.

“I do believe that as people meet me, talk to me, as we come together, they will see that we have so many shared values, and so many shared passions,” she said.

Regardless of how far she makes it in the race, Abboud said her candidacy presents an opportunity to remedy the divisiveness of the presidential election and force deeper conversations about American identities.

“Last year, I saw that friends, families and neighbors were literally being torn apart by the rhetoric that was going on,” she said. “It was feeding down into our local elections, our social media, into going to the grocery store.”

And despite facing long odds, the community organizer remains optimistic.

“I believe I can tap into people who are not energized and energize them,” Abboud said. “We’re inundated with people who want to volunteer, and just that alone, you’ve already succeeded as a candidate.”

But, she said, “This will probably be the hardest race that anyone has ever run.”