The 4-year-old Siberian husky mix uses the prosthetic to help her move effortlessly on concrete, rocks and other hard surfaces.

Terra is one of the growing number of canines that have improved their mobility with the use of prosthetics.

The animal prosthetics industry is still in its infancy. It’s difficult to track the precise growth in supply or demand of animal prosthetics because researchers haven’t conducted significant studies examining the industry. Still, experts say they’ve seen increases in the demand, mainly due to advances in technology and the ever precious role of pets in the household.

Co-founder and co-owner Amy Kaufmann said the number of animals they’ve seen since opening in 2003 has “increased by above 1,000 percent.” She said they have about 180 patients a month.

OrthoPets has created prosthetics for more than 13,000 pets from more than 35 countries. 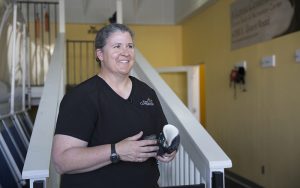 Kate Titus, owner of A Local Companion, said she has seen an increase in the demand for animal prosthetics at her business in Tucson. (Photo by Megan Bridgeman/Cronkite News)

Kate Titus has seen the increase of animal prosthetic demand reflected in her clinic, A Loyal Companion, a Tucson-based recreation center for canines that provides swimming, training, and wellness, including mobility services. The first four years Titus worked with mobility devices, she fitted only a few prosthetics. Now, Titus said she sees about five clients a year.

She said that the dog’s role in family dynamics has changed over the last 10 years.

“Families are looking for more options, whether they be nonsurgical, support to surgery, they are looking for a way to make their dogs feel more comfortable and live a better quality of life,” Titus said.

Dr. Michael Jaffe, an assistant professor of veterinary medicine at Midwestern University in Glendale, said as more families seek prosthetics, vets have an obligation to become more familiar with them.

“As we get the word out there to pet owners, it is something that they are going to ask their vets for,” Jaffe said. “We as vets are obliged to learn more about it.”

Jaffe said the option to use prosthetics has only been recent, and they don’t yet teach extensively about prosthetics in veterinary courses.

“It is something that we will continue to add on to as clinical experience and research and technology advances,” Jaffee said.

Some people have turned to 3-D imaging to develop animal prosthetics, which has made it easier to cast impressions and reorder prosthetics. Titus said it also can provide a perfect fit and mold to the wearer.

“The biggest change is … how we capture what the shape of the limb or the stump is,” Titus said. 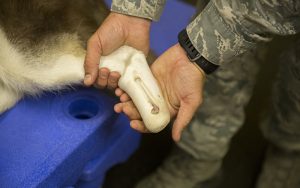 A prosthetic made by Denver-based OrthoPets uses a boot made from foam to prevent chafing on Terra, a husky mix that has a missing paw. (Photo by Megan Bridgeman/Cronkite News)

Kaufmann said “3-D printing plastic is not as strong and durable” compared to the industrial-grade plastics they use. She said their plastics can better withstand the impact animals put on the prosthetics.

Some pet owners have printed their own prosthetics at home, and some human prosthetics have been created with 3-D printers as well.

Kaufmann said many of these are created for non weight-bearing body parts, such as arms.

“We’ve done a lot of case studies and found a lot of the plastic that is used (in 3-D printing) … are not holding up,” Kaufmann said.

Titus did say vets and animal prosthetic experts have learned from human experiences, especially new techniques used by the military for soldiers who need prosthetics.

Titus said nearly all animals can be fit for prosthetics, but canines constitute the largest percentage of animals utilizing them. Cats can sometimes be too finicky.

The price of prosthetics at OrthoPets typically ranges from $1,200 to $1,800, Kaufmann said.

Terra’s owner, Tobin Brynt, adopted her after walking past an animal rescue while stationed in South Korea in 2013.

“During the entire tour, my then 6-year-old, Levi, has been really wanting an orange husky. I was walking by the kennels one day, and there she was. The label said ‘my name is Scarlet, and I like belly rubs,'” Brynt said. “Long story short, we ending up adopting her and taking her to Alaska.” 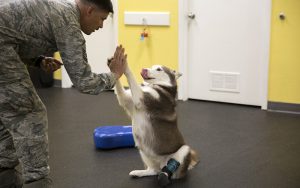 Terra only has three paws.

“We don’t know what happened. From the X-rays taken … we can guess that she had some sort of traumatic injury that cut off her toes, so to speak,” Brynt said.

Once in Alaska, Brynt tried taking Terra to multiple vets to get her fitted for a prosthetic, with no luck.

“A bunch of other people suggested that we just cut (the leg) off, but we just we couldn’t,” Brynt said.

The Brynts moved to Tucson in 2016, where they connected with A Loyal Companion, a partner clinic with OrthoPets.

Kaufmann said that before OrthoPets, there was no company creating and providing orthopedics and prosthetics for animals.

Now there are six companies worldwide that provide animal prosthetics, but all of them work full time with human prosthetics, with pet prosthetics on the side, Kaufmann said.

“If you think about the number of pets throughout the world, (the number of companies that make animal prosthetics) is not a large number,” Kaufmann said.

After scans and casting, OrthoPets made and sent Terra’s prosthetic. Though Terra gets around just fine even with her missing paw, Brynt said she’s a “fish in water” as soon as she gets the prosthetic on.

“It kind of brought tears to my eyes because I was so happy to see her be a normal dog,” Brynt said. “It was a great to see her be whole again.”