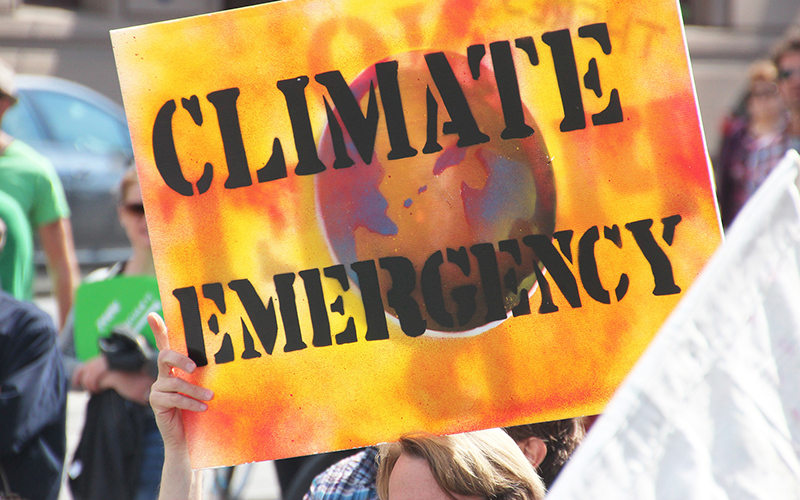 Debate over climate change is just one of the issues driving the March for Science, which is scheduled to occur at more than 500 sites. Marches in Phoenix, Tucson, Flagstaff and Lake Havasu City are expected to draw thousands from across the state. (Photo by Takver/Creative Commons) 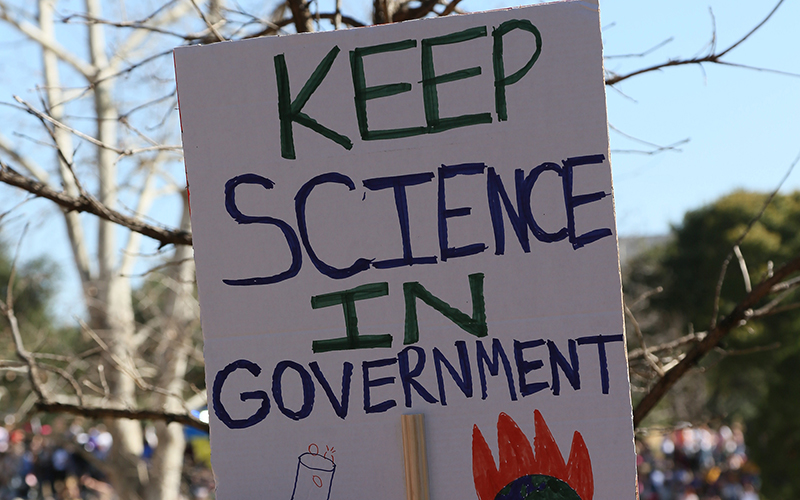 A protester in Austin, Texas, at the Jan. 21 Women’s March that was held there. Organizers of this week’s March for Science said their movement was inspired by the women’s marches that organized around the globe to protest President Donald Trump’s inauguration. (Photo by Steve Rainwater/Creative Commons)

WASHINGTON – Organizers of the March for Science events scheduled around the country Saturday said they are compelled to march – something scientists don’t normally do – to defend their work against critics and their programs against budget-cutters.

“A lot of scientists feel like their funding is threatened and their voice is being extinguished by policy makers who are not paying attention to science,” said Sedona Maniak, a wildlife biologist and organizer for the march in Phoenix.

The march was inspired by the post-inaugural Women’s March against President Donald Trump and scheduled to coincide with Earth Day – facts not lost on critics who are calling the events little more than “politics disguised as science.”

The first-of-their-kind marches are scheduled for more than 500 locations around the globe, including events in Phoenix, Tucson, Flagstaff and Lake Havasu City, which are expected to draw thousands of people across the state.

Maniak said the Phoenix event is expected to draw more than 5,000 people, which organizers are calling the biggest coordinated effort they have seen involving science of all disciplines. Maniak said politicians who deny climate change and have been hostile to the EPA have motivated those in the science community who traditionally do not speak out to march.

“It has come to a point where even scientists who do not generally become active in the public eye feel the need that they need to get the message out,” she said.

But opponents say that scientists engaging in activism is a slippery slope.

“Very few of them (scientists) have thought critically about the natures of science and politics and how those things differ,” said Marlo Lewis, a senior fellow at the Competitive Enterprise Institute.

“All too often they have no clue that when they behave like partisan hacks in the name of science, they politicize science and undermine public trust in science,” Lewis said.

Despite organizers claims that they are not targeting Trump, critics note that many of the issues driving the march – cuts to Environmental Protection Agency funding, the roll-back of environmental regulations and reductions to research programs – are all administration proposals.

Lewis said the march will make ordinary people skeptical about those who participate in the protest, and can “corrupt scientific judgement.”

But Kathleen Rogers said the science community needs to take action as politicians attack their livelihood and question their integrity.

“I look at it like this, nobody likes to be called a liar,” said Rogers, president of the Earth Day Network, which is a co-organizer of the march on the National Mall in Washington. “Trump and the cronies out there are undermining facts, they’re undermining science.

“Ironically the march for science is about supporting and defending truth and integrity more than anything,” Rogers said. “The scientists I’ve talked to are deeply wounded that their integrity is being called into question, especially because they know there is an agenda behind it that is so untrue.”

That agenda, she said, includes climate deniers who aim to discredit the “97 percent of the science world” that agrees climate change is caused by human activity.

Kevin Dahl, Arizona senior program manager with the National Parks Conservation Association, said he plans to march in Tucson to raise awareness for the value of science.

“I think we have come to a unique point in American history where there is widespread misunderstanding about what science is,” Dahl said. He blamed for-profit industries for pushing many of the challenges to scientific research.

“People who don’t like the results of scientific work are going to great lengths to discredit science for their own profit needs,” said Dahl, who is marching to help people understand the importance of not ignoring science.

Dahl, a veteran of the first Earth Day in 1970, brushed off suggestions that this weekend’s are political.

“I remember celebrating the first Earth Day in 1970. It was a very political event, we were in the midst of trying to get clean-air, clean-water legislation passed,” said Dahl, who expects this year’s march to be a “big one.”

“This year, we are concerned about this attack and disbelief in science,” he said.