Homeland Security Secretary John Kelly said the department has made gains in many areas since the Trump administration took over, like the sharp drops in the number of illegal immigrants caught at the Southwest border, but said more needs to be done. (Photo by Ziyi Zeng/Cronkite News) 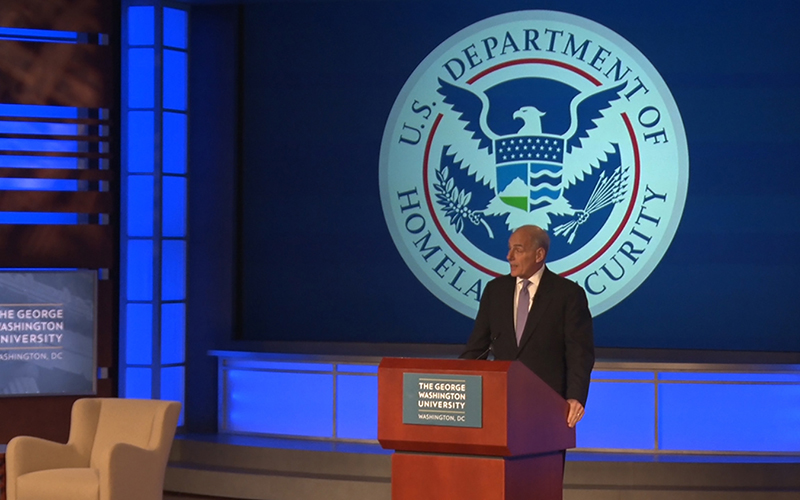 Homeland Security Secretary John Kelly had sharp words for lawmakers who criticize the way his department is enforcing immigration laws, saying they should change the laws or they “should shut up and support the men and women on the front lines.” (Photo by Ziyi Zeng/Cronkite News)

WASHINGTON – Homeland Security Secretary John Kelly said that apprehensions at the Southwestern border have fallen sharply during his first 90 days in office, but there is still security work to be done in the United States and abroad.

“We are under attack from terrorists from both within and outside our borders, these men and women are without conscience and they operate without rules,” Kelly said during a speech at George Washington University. “They hate the United States because we are a nation of laws, of rights and of freedoms.”

The comments, in what was touted as Kelly’s first address since taking office in January, were also laced with disdain for lawmakers critical of how the agency is doing its job and for “inaccurate” reporting by the media.

“If lawmakers do not like the laws they’ve passed and we are charged to enforce, then they should have the courage and skill to change the laws,” Kelly said. “Otherwise they should shut up and support the men and women on the front lines.”

Members of Arizona congressional delegation did not return requests for comment on the comments Tuesday. But one immigration advocate said that Kelly’s telling lawmakers to “shut up” is asking them to turn a blind eye while Immigration and Customs Enforcement “tears families apart.”

“Either Gen. Kelly simply does not know what his agents are doing, or he’s lying to the public at the request of his boss,” said David Leopold, a former president of the American Immigration Lawyers Association.

Leopold said he is worried because there “is no enforcement priority, the priority of this administration is to instill fear.”

But Kelly defended actions by ICE officials, saying they are taking steps to “get the lawbreakers off of our streets and out of our country for the good of our community.”

In his wide-ranging speech, Kelly outlined DHS responses to cyber threats, terrorism, drug trafficking and department morale in the last 90 days, while repeatedly emphasizing that the threats against the United States are “relentless.”

He put a particular focus on transnational criminals, cartel members and extremists as threats to “the continuation of the United States as we know it.”

“No better argument to secure our borders than the transnational criminal organizations we face,” Kelly said. “Since the first week of President Trump’s administration we have been actively securing our borders and enforcing our immigration laws.”

In March, apprehensions at the Southwest border were 64 percent lower than they were a year earlier, which Kelly attributed in part to the abandonment of what he called the catch-and-release policy at the border, and “actively enforcing our borders.”

Despite frictions between the Trump administration and the Mexican government, Kelly said that Mexico is an ally when it comes to securing borders and eliminating drug trafficking. He said the relationship between the Mexican and U.S. governments is currently “in good shape.”

Kelly described the journey that many Central American and Mexican immigrants make on their way to the U.S. as “terrible,” noting that U.S. Border Patrol officers had rescued “nearly 4,000 near-death individuals who had found themselves abandoned by the coyotes in the desert.”

DHS is working to arrest coyotes – the people who help smuggle immigrants into this country – and the family members who pay them to smuggle loved ones in, Kelly said. He said the department would like “nothing more” than to “put these human smugglers out of business, and we’ll do anything in our department to do just that, within the law.”

Despite gains against human smuggling, Kelly admitted the department still grapples with a growing drug problem in America. DHS agencies have reported a “sharp uptick” in cocaine seizures, and an increase in methamphetamine and heroin seizures this fiscal year.

Kelly sees marijuana as a gateway to those drugs, which is why he said marijuana offenses are a key element in building “deportation removal apprehension packages for targeted operations against illegal aliens living in the United States.”

Kelly conceded that he does not think the department can “arrest their way out of this.” He said it is on parents, teachers, coaches and law enforcement agencies to find a comprehensive solution for “the addictive U.S. drug demand.”

In the meantime, he said, the department is enforcing the laws and will continue to do so.

“We are moving in exactly the right direction,” Kelly said. “We will never apologize for making our country more secure.”