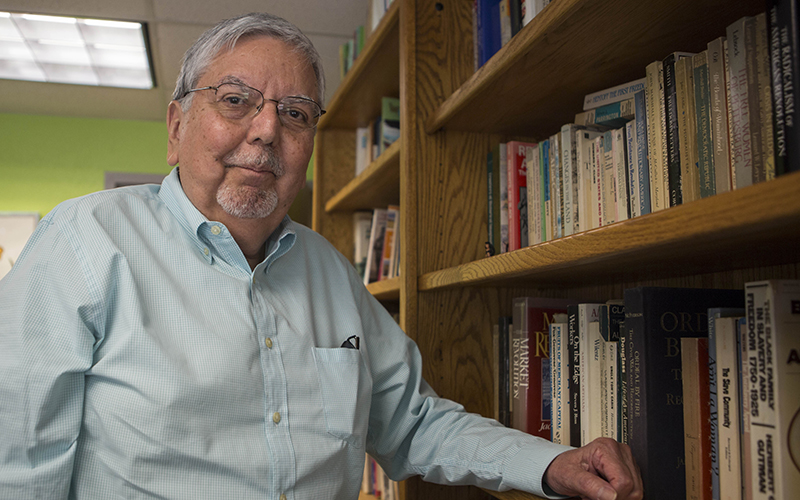 Associate Professor Edward Escobar poses for a portrait in his office in the Interdisciplinary B building on the Tempe ASU campus on Monday, April 3, 2017. Escobar is a founding professor of the Department of Chicano/a Studies at ASU and is now retiring after 24 years. (Photo by Johanna Huckeba/Cronkite News)

PHOENIX – When Edward Escobar put in his application to work for Arizona State University in 1993, he was charged with the task of creating a Chicano Studies course, the first of its kind on campus.

Now in his final semester as an instructor, Escobar is completing a new PowerPoint presentation for his 3 p.m. course, Historical Studies in Race, Crime. He joked that normally, the last semester of teaching should be smooth sailing. It’s not exactly the ideal time to create new course material.

“I was the founding chair and it makes me feel proud but also lucky to have had the support of the administration,” said Escobar, architect of ASU’s School of Transborder Studies who is retiring after 24 years at the school. “That’s when Lattie Coor was president. He supported our efforts as does (current ASU President) Michael Crow.”

Before coming to ASU, Escobar worked in administrative positions at the University of California-Irvine, Stanford University and then full-time at Indiana Northwest in Gary, a regional campus of Indiana University in Bloomington, Ind.

“The job that I applied for was to lead the effort to create a department for Chicano and Chicana studies,” he said of his start at ASU. “It was a national search and because of my previous administrative experience as well as my academic work, they chose me.”

Although Escobar was the lead on the project to bring the first Chicano studies major to ASU, he makes it clear that he couldn’t have done singlehandedly. There was a committee at ASU that would meet in hopes of coming up with a proposal to bring the major to ASU.

“It makes me feel immensely proud and lucky to have been able to have worked with such a group of talented and wonderful people that allowed me to be there for the development of the unit,” he said. 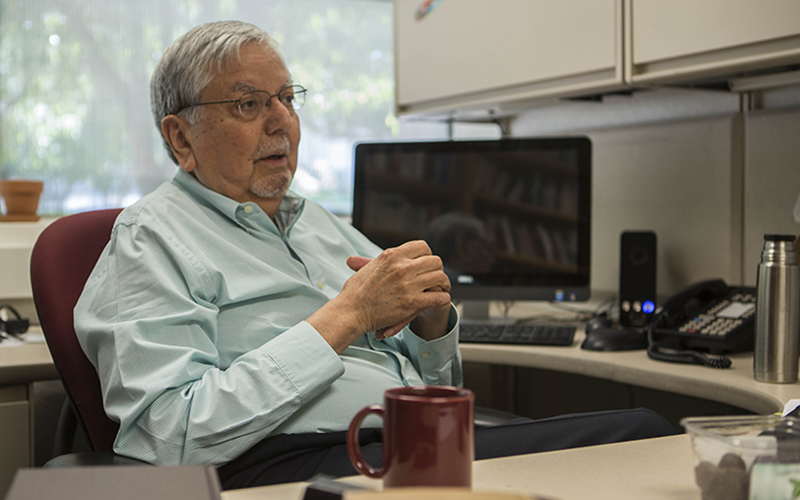 School of Transborder Studies Associate Professor Edward Escobar discusses his 24 years of service and his retirement plans from his desk in the Interdisciplinary B building on the Tempe ASU campus on Monday, April 3, 2017. (Photo by Johanna Huckeba/Cronkite News)

Although it was the first of its kind, Escobar said there was a lot of support from his colleagues and deans within the several colleges within ASU. He said in the senate there were a few “no” votes to further the major, but overall there was huge support. In the history department, he reported to the provost and he advised Escobar to go out and talk to all of the deans.

“I made an appointment to talk to all of the deans at all the different colleges and within the university to seek their advice and I had the support of all,” he said. “We didn’t have to do much in the way of selling. They understood that, given the population of this state and the fact that the population was expanding. This was in 1993.”

The vision born almost a quarter century ago remains the same today. The initial goal of the major was to train and educate people so that students would be able to go out and serve the community. It started in 1995 with an emphasis in particular on the Mexican-American population in the Southwest, but also throughout the U.S.

It stressed possessing knowledge about the population being studied, having the theory of understanding where people fit and studying how to further improving the conditions for Mexican-Americans and other Latinos.

In 2005, it was broadened to focus on other Latino groups and to give specific attention to border issues. It was then that Escobar said his department coined the term “Transborder.”

In March, Escobar was honored by the on-campus coalition El Concilio. He was named Outstanding Faculty Member. He said he has received awards in the past but none is more gratifying than awards from his students.

Socorro Carrillo, a student at the School of Transborder Studies, described Escobar as a model for the Latino and Hispanic communities at ASU.

“Without his hard work and education, we could not have a school dedicated to these studies, let alone a major,” Carrillo said. “This recognition shall serve as a testament to building not only an academic foundation for Latino, Hispanic students but ultimately building a place we call home.”

Upon leaving ASU Escobar plans to return to Los Angeles, where he was born.

“My mother was from Mexico, my father from El Paso, Texas,” Escobar said. “Together they had received a total of six years of formal education but in their own way, they were very educated. They read a lot and they passed along their enthusiasm for reading to me and my siblings.”

Bree Gonzalez, advocacy director for El Concilio and a student in Transborder Studies, said as a first-generation college student in her family she was glad to have Escobar as a mentor. She said the first day in his class, she wore a Dodgers jersey and said it created an early bond.

“The thing I’m so grateful and thankful for Dr. Escobar is besides having that relationship with him teaching, he goes above and beyond to really get to know his students,” Gonzalez said. “I’m so thankful that I got to get some classes from him because those are classes that I will never forget.”