Hauser and his dad have applied for conservation easements for much of their property. This sets restrictions on the land, essentially making it only usable for farming purposes.

“My kids’ kids’ kids down the line, they can’t sell it and try to subdivide it,” Hauser said. “It would have to be sold to someone like me, as a farmer.” 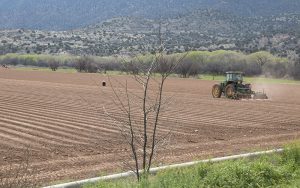 Zach Hauser and his father own Hauser & Hauser Farms, which is the biggest user of water in the Verde Valley. (Photo by Megan Bridgeman/Cronkite News)

It’s just one of the measures the Hauser family has taken to ensure the farm’s success in the future. Making sure they’re sustainable also fits in with their long-term goals. The farm recently switched from a flood system to a drip irrigation system on a carrot field to help reduce their water usage.

It’s an improvement funded by the national water restoration campaign, Change the Course. The campaign brings together the public, corporations and conservation organizations to raise awareness and restore freshwater ecosystems.

Change the Course funds 32 projects in 10 states, mostly in the Southwest. Eight of those projects are in Arizona.

On average, each American uses about 100 gallons of water a day, according to the U.S. Environmental Protection Agency. The agency projects that by 2030, Arizona will see a 109-percent increase in population, with each Arizonan using between 126 to 150 gallons of water per day. 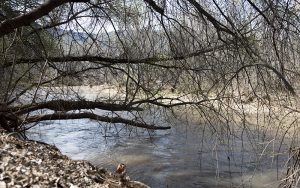 The Verde River was nearly full this spring. However, in summer seasons it will decrease significantly. (Photo by Megan Bridgeman/Cronkite News)

For the Hausers, the decision to switch to drip irrigation was an easy one.

Hauser said the flood system uses “pretty much twice what the crop actually needs … drip can get in the 90-percent range efficient so you’re barely putting on what the crop needs and maybe a little bit more.”

That’s critical because the Verde River provides irrigation for farming, rafting and fishing for locals and a habitat for wildlife.

“(The Verde River) is our only source of water in this valley,” Hauser said. “If there’s no water here, there’s no farming.”

Hauser and his father own Hauser & Hauser Farms, a 600-acre farm spread out throughout the area. It’s the biggest user of water in the Verde Valley.

The drip irrigation system, which costs between $1,000 and $3,000 per acre, is one of the many projects Hauser & Hauser Farms has installed with the help and financing of the Bonneville Environmental Foundation, the nonprofit organization that founded Change the Course.

“It’s really expensive. It’s not a cheap thing to get into and then there’s a learning curve,” Hauser
said. “For somebody to just do it on their own, that would be a big leap of faith.”

That’s why the foundation steps in to help. About 30 major corporations help underwrite the projects through Change the Course.

“It’s a big win for small nonprofits who might not get the time in front of these large corporations,” Fisherman said. “We’re like another fundraising arm for some of these nonprofits.”

Some of the money has funneled down to the Arizona Nature Conservancy, which funds water conservation projects in Arizona, including the drip irrigation system on Hauser & Hauser Farms.

The conservancy has worked with the Hausers for seven years, said Kimberly Schonek, Verde River project manager at the Nature Conservancy.

Schonek said the conservancy works a lot in the Verde Valley, between Sedona and Prescott, mostly on irrigation ditches.

“(We’re) trying to focus our work on how to use water efficiently as possible while integrating it into their farm needs and then reaching out to other farmers,” Schonek said. 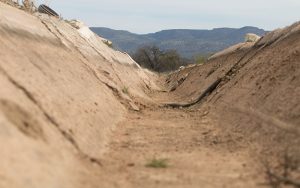 For decades, farmers have used dirt ditches to deliver water. Some of that water gets lost to the soil. (Photo by Megan Bridgeman/Cronkite News)

Change the Course funds about half of the conservancy’s water conservation projects in the Verde Valley. It provided all funding for Hauser & Hauser Farms’ drip irrigation system and a project that will replace a ditch with a pipe.

The ditch, which was built in 1903, runs about a mile from West Clear Creek to 10 shareholders. Schonek said the pipe would provide more water to the farmers and people who need it.

“They lose somewhere around 20 percent of their water they’re trying to convey,” Schonek said of the ditch.

The pipe wouldn’t necessarily save money, but it would lead to less water waste because water will no longer seep into the soil, said Jess Mulcaire, part shareholder of the ditch. 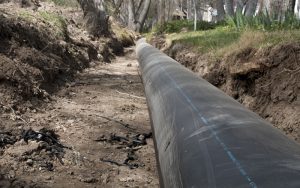 The Arizona Nature Conservancy is replacing a dirt ditch with a pipeline to carry water from West Clear Creek to shareholders. (Photo by Megan Bridgeman/Cronkite News)

Hauser said he wouldn’t save money with the drip-irrigation system on his carrot farm, either.

“Right now, our water usage is based off a per-acre, so the amount of water is not regulated,” Hauser said. “But us being responsible, we like to use as little as possible.”

Hauser said because they’re the largest user of water in the area, they will set an example that will inspire others to do the same.

“We got to do our part to preserve it and hopefully others will want to do the same,” Hauser said. “It’s our only source of water in this valley. We have to take care of it.”

Change the Course plans to expand its reach to all of North America, helping to provide funding to water conservation efforts nationwide.