Amina Mohamed Aden, a Somali refugee, arrived in Phoenix in August 2016. Half of her family is still waiting at a refugee camp Kenya to join her, and she fears President Trump’s travel ban will keep them separated. (Photo by Adriana de Alba/Cronkite News)

PHOENIX – When 13 states recently filed a brief in support of President Trump’s travel ban, they used Arizona’s rocky history of immigration enforcement at the core of their legal argument.

Citing Arizona v. United States, the states aim to turn Arizona’s defeat over the notorious SB1070 into a victory for the Trump Administration.

“The States possess no authority to restrict or set the tone terms of aliens’ entry into the United States,” the states wrote in the brief. “Instead, the States and their elected officials rely on the federal Executive Branch to carry out that function, pursuant to the laws of Congress. See Arizona v. United States.”

In this Supreme Court decision, the justices struck down the major provisions of Arizona’s law that required stricter immigration controls from local and state law enforcement, saying immigration policy is a power reserved only for the federal government.

That conclusion, the states wrote, means states rely on the federal government to protect their citizens from “serious flaws in the pre-existing vetting scheme for aliens residing abroad who wish to enter this country under visas or as refugees.”

The states filed the brief in court on March 27 by Arizona Attorney General Mark Brnovich and 11 other attorneys general from Alabama, Arkansas, Florida, Kansas, Louisiana, Montana, Oklahoma, South Carolina, South Dakota, and West Virginia, as well as the governor of Mississippi.

Ryan Anderson, a spokesman for the Arizona Attorney General’s Office, said in an email that the president’s travel restrictions were Constitutionally sound.

“Congress has granted the President broad, discretionary authority to suspend the temporary entry of certain non-residents,” he wrote.

But a ruling in favor of the ban could directly affect Amina Mohamed Aden of Phoenix, a Somali refugee, whose family is separated across the Atlantic. 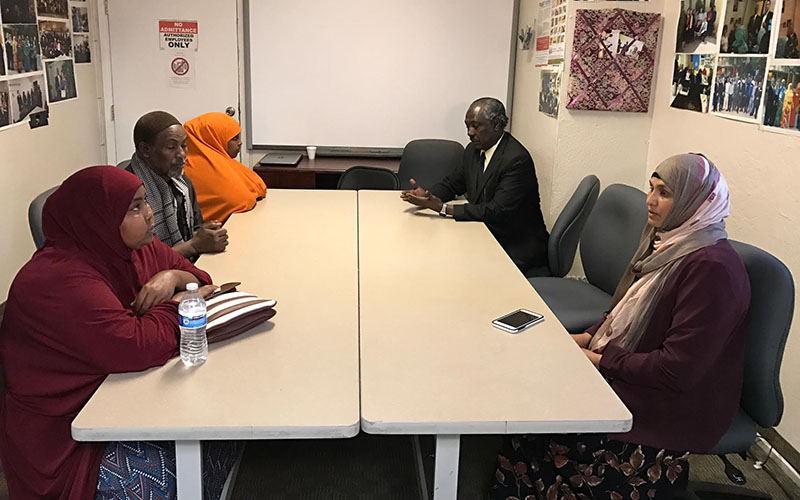 Amina Mohamed Aden (left) speaks with other Somali refugees in Phoenix about President Trump’s travel ban. Somalia is one of six Muslim-majority countries whose citizens would be barred from coming to the U.S. under the order. (Photo by Adriana de Alba/Cronkite News)

She arrived in the U.S. in August 2016 with three of her five children. Her husband and two other children are still waiting for officials to approve their status in a Kenyan refugee camp. She has a medical condition that causes her to periodically collapse, she said, making it difficult for her to work and support her kids.

Aden said if the travel ban is upheld it would only prolong her family’s distress.

“The person who was my dream and hope, and the love of my life … If he was here maybe he could take over some of the responsibilities and ease my pain, especially the emotional side of it,” Aden said through a translator.

Somalia is one of the six Muslim-majority countries whose citizens would be blocked by the executive order, along with Iran, Libya, Sudan, Syria, and Yemen.

Aden urged leaders to recognize the hardships of being a refugee and said they are simply seeking safety and prosperity for their families.

In the brief, the states argue the ban is “not a pretext for religious discrimination, as the Order is grounded in national-security concerns.” Congress and the Obama Administration had previously highlighted these six nations as “countries of concern” under the visa waiver program, the states said.

While the Obama Administration did identify the same nations as “countries of concern,” this applied to a specific visa-waiver program and citizens of these countries were never completely barred from entering the U.S. under President Obama.

According to the State Department’s website, “Refugees are screened more carefully than any other type of traveler to the U.S.”

The entire vetting process takes an average of 12 to 18 months, and if the applicants are Syrian it can take closer to two years because they require an extra round of screening.

Phoenix Councilwoman Kate Gallego, who represents District 8 where many refugees live, said this process is rigorous enough and the travel ban is based on misinformation.

“I think it may come from a lack of understanding,” she said. “Refugees are incredibly well-vetted. There are a huge variety of agencies from homeland security to the department of state, national intelligence, infrastructure that vet refugees before they come here.”

Gallego, who is also vice mayor of Phoenix, said refugees make up a significant portion of Arizona’s economy, especially the workforce at Phoenix Sky Harbor.

Sen. Jeff Flake, R-Arizona, has also said the refugee vetting process is adequate. During an interview with NPR on Saturday, he discussed Trump’s missile strike against a Syrian air base early Friday morning and said the U.S. has a responsibility to accept refugees.

“I’m certainly going to continue to encourage the administration to resume the acceptance of Syrian refugees, that we should be so lucky in this country if everyone who entered the country was screened and vetted as well as refugees,” he said. “And it’s tough to see women and particularly children treated as they are in Syria and not want to help them.”

Arizona ranked sixth in the nation for number of refugees resettled in fiscal year 2016, according to the Pew Research Center. And refugees from Somalia make up the fourth-largest nationality population in Arizona, behind Iraq, Vietnam, and Cuba, according to the Arizona Refugee Resettlement Program.

The ban was the second of its kind issued by executive order after the first was blocked by a federal judge in Washington.

In addition to barring citizens from the six countries from coming the U.S., the revised ban would also temporarily suspend all refugee entries, plus cap the number of refugees that can come to the U.S.

Although it was designed to withstand judicial challenges, judges in Maryland and Hawaii both placed restraining orders on it mid-March, preventing it from going into effect unless the federal government successfully appeals.

Abdikarin Aden, a Somali refugee who arrived years ago who is not related to Amina Mohamed Aden, said the president should take a closer look at refugees’ potential contribution in the U.S. He plans to attend Arizona State University this coming fall.

“I would like Trump to understand…and sympathize with these people and see how could we give them a better life without blocking them from coming to the land of opportunity,” he said.