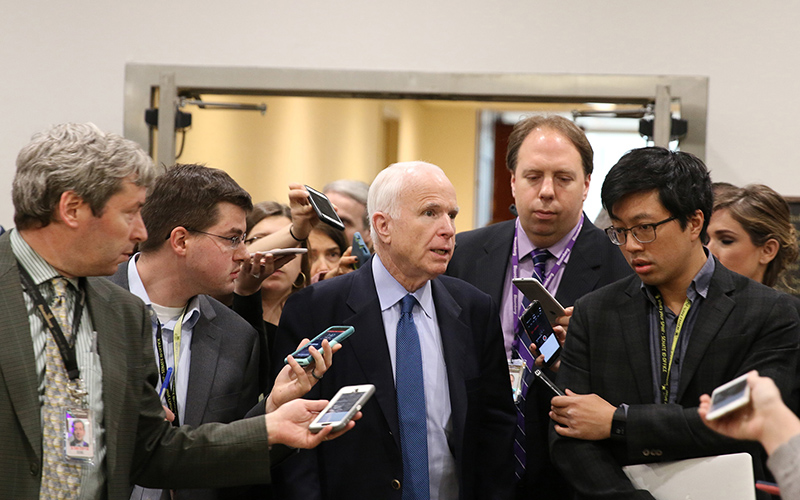 Sen. John McCain, R-Arizona, said President Donald Trump, “unlike the previous administration,” took action in response to crises in Syria. But he said the missile strikes are just a “credible first step” in what must be a broader strategy. (Photo by Alexis Egeland/Cronkite News) 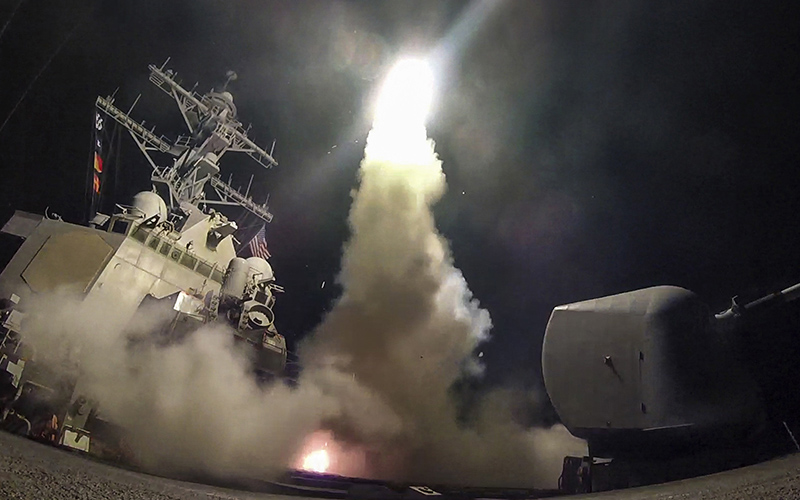 The guided-missile destroyer USS Porter launches cruise missiles from the Mediterranean Sea as part of a U.S. strike against military targets in Syria, after the Syrian government’s reported use of chemical weapons against civilians. (Photo by Spc. 3rd Class Ford Williams/U.S. Navy)

After a closed-door Pentagon briefing for senators Friday, Sen. Jeff Flake, R-Arizona, said he believes the president had the authority to order U.S. missile strikes against Syria for that country’s reported use of chemical weapons. (Photo by Alexis Egeland/Cronkite News)

WASHINGTON – Most Arizona lawmakers agreed Friday that Syria’s apparent use of chemical weapons against civilians called for quick action by the U.S., but some said President Donald Trump went about it the wrong way.

Trump authorized the launch of cruise missiles late Thursday on targets at Shayrat Airfield, a Syrian air base believed to have been involved in chemical weapons attacks that killed hundreds of civilians Tuesday, including women and children.

Few lawmakers were willing to criticize the actual cruise missile strikes, which Sen. Jeff Flake, R-Arizona, called an “appropriate and timely” response to the Syrian attacks.

But those strikes were carried out without any notice to members of Congress. Many members were like Rep. Andy Biggs, R-Gilbert, who praised the action on one hand while noting that Congress needs to be consulted if it is more than just a one-time action.

“I’m thankful for the president’s leadership and for the brave men and women of our Armed Forces who commit themselves to defending our freedoms and national security,” Biggs said in a statement Friday. “I am interested to learn more about the president’s strategy going forward and to join my colleagues in Congress providing their expertise and oversight.”

Those concerns were echoed by Rep. Raul Grijalva, D-Tucson.

“These actions need to go through a full vote by the House of Representatives and the Senate because that’s what the Constitution asks for and that’s why we are elected,” Grijalva said.

Grijalva said he worries that this military action could lead to others by the administration, and that Congress must be part of that decision-making.

Rep. Tom O’Halleran, D-Sedona, said the U.S. must work to stop future “barbaric” attacks like the Syrians’ use of chemical weapons and that Congress should not wait for Trump to come up with a plan.

“Congress has the constitutional obligation to immediately begin debating the use of future military force against Syria,” O’Halleran said in a prepared statement. He called on House leaders to call Congress back from the recess that began Friday to begin debating Authorization for Use of Military Force legislation.

He said a total of 59 missiles were launched, targeting aircraft, hangars, ammunition bunkers, fuel storage, radar and other facilities associated with the air base. Davis said Russian and Syrian personnel were not targeted, and that “extraordinary measures” were taken to prevent civilian casualties.

The Pentagon was assessing the effect of the strikes Friday, but lawmakers said something had to be done.

“What happened last night, I would argue, would not require authorization,” Flake said Friday after a Pentagon briefing for senators.

He compared Thursday’s strikes to similar actions by President Barack Obama in 2013, actions that Obama brought to Congress.

“I didn’t believe that, had President Obama decided to strike after the red line was crossed, that that would have required authorization, although I voted to give him that when it came to the Senate,” Flake said.

Two lawmakers who had been sharply critical of the Obama administration’s handling of Syria’s civil war – Rep. Trent Franks, R-Glendale, and Sen. John McCain, R-Arizona – praised Trump for taking action that they said Obama would not.

But McCain, a decorated veteran, said Thursday’s strikes were just a “credible first step” and that the U.S., which has refused to take in Syrian refugees under Trump, needs to establish safe zones to help with that nation’s “ongoing humanitarian crisis.”

Not all veterans agreed with Trump. Rep. Ruben Gallego, D-Phoenix, said that while “the Assad regime’s terrible atrocities are worthy of every bit of condemnation they have received, and more,” he does not think the president put much thought into the long-term effects of his decision.

Gallego, who served as a Marine in Iraq, said he hopes the missile strikes will prevent chemical attacks, but worries about possible repercussions.

He said he is also concerned that praise Trump is receiving for the attack could lead to an escalation, given Trump’s “track record of impulsive and immature decision making” and the president’s possible belief now that he has a free pass to make decisions unilaterally.

Grijalva, noting that Trump said as recently as last week that Syria’s civil war is a Syrian problem, said that whatever happens it needs to be carefully thought out and shared with Congress.

“Now that reality has hit, it is very important that the Trump administration lay out strategy both politically and diplomatically,” he said.