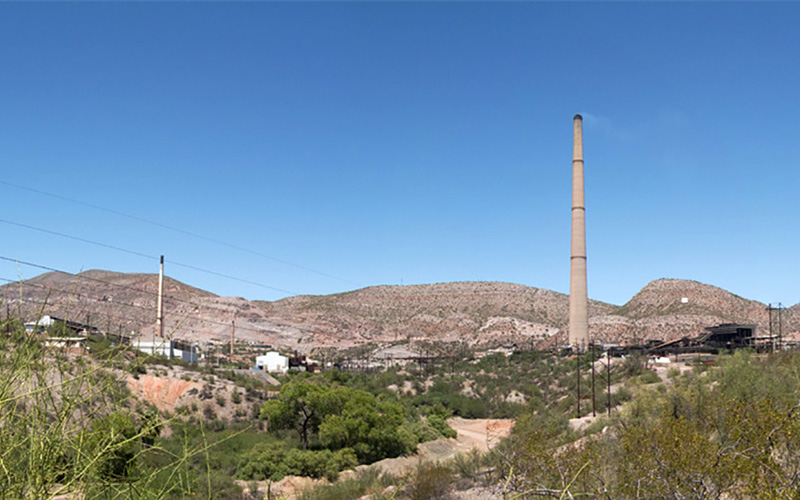 The Asarco smelter in Hayden was one of the facilities subject to the clean-air rules imposed by the Environmental Protection Agency, an action that was upheld by the federal appeals court. (Photo by Alan Stark/Creative Commons)

WASHINGTON – The Environmental Protection Agency was within its rights to impose certain standards on industrial sites in Arizona in place of state rules meant to ensure visibility in federal parks, a federal appeals court ruled.

A three-judge panel of the 9th U.S. Circuit Court of Appeals on Monday rejected arguments by the Arizona Department of Environmental Quality and some of the manufacturers that the EPA actions were “arbitrary and capricious.”

Part of the Clean Air Act is aimed at reducing haze in federal parks and forests, and mandates that the state submit a plan to meet those goals. But it allows the EPA to submit its own plan if the state’s plan is not satisfactory.

The EPA rejected the ADEQ’s 2011 plan and submitted its own. The state and several manufacturers sued, claiming that the agency’s regulations – numerical progress goals, efficiency controls on cement kilns and emissions caps on copper smelters – were arbitrary and capricious.

But the appellate panel deemed two of the state’s challenges as untimely and rejected the arbitrary and capricious charge, saying the petitioners had not shown that the EPA was acting outside the bounds set out by Congress.

An ADEQ official said he was “disappointed” by the ruling, and said that the EPA’s plan has yielded negligible benefits.

“While we recognize there are ancillary air quality benefits from the Regional Haze Program – the congressional intent for which is to improve visibility in our national parks and monuments – the program only has resulted in unperceivable visibility improvements in Arizona, when improved visibility should be the focus of the program,” ADEQ Air Quality Division Director Timothy Franquist said in a prepared statement.

CalPortland, one of the building materials companies that sued the EPA along with the state, echoed that dissatisfaction.

“We think that the EPA used their modeling incorrectly, and far overstated any impact we have on the visibility in the national park,” a company spokesman said. “Over the next 10 years, this ruling could cost us over $10 million, without any impact to the visibility.”

But environmental advocates hailed the ruling as an important step in protecting the country’s natural assets.

“Sierra Club is happy and unsurprised by this outcome,” said Gloria Smith, an environmental attorney with the organization. “Air pollution from cement kilns, smelters and coal plants affects some of the most iconic parks in the United States.”

She challenged claims that the regulations were costly and ineffective.

“I will say that EPA does not issue a regional haze rule without conducting modeling and having actual monitoring of results,” Smith said. “I am confident that the court would not have upheld EPA’s decision had it not been fact-based.

“We have seen over and over again facilities overestimate the cost of compliance,” she continued.

Even if CalPortland’s $10-million-over-10-years figure is accurate, she said that for a company of that size, it “does not seem that egregious.”

Franquist said the state is “beginning a thorough legal review” of the 9th Circuit’s decision on the regional haze rule. But that review comes at a time when the Trump administration has ordered a review of environmental regulations, which could help the state’s case.

“We hope this matter will be one of many rules the new EPA administration revisits,” Franquist said.