Solar industry jobs grew 25 percent, to more than 260,000 nationwide in 2016, while growth in Arizona was a more modest 6 percent, climbing to 7,310 jobs, a new report says. (Photo by Elena Elisseeva, Greens MPs/Creative Commons) 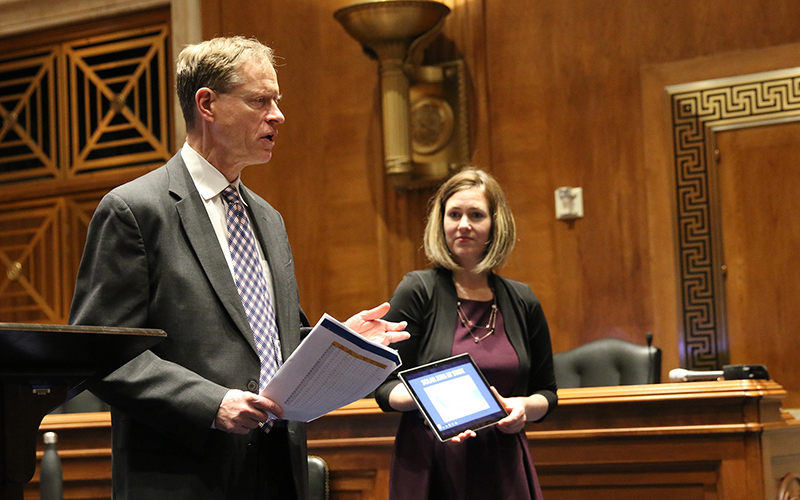 Ed Gilliland and Andrea Luecke of the Solar Foundation release the results of the latest solar jobs census, which Luecke was just the latest in “a lot of good years” for the solar industry. (Photo by Joseph Guzman/Cronkite News)

WASHINGTON – Arizona saw a 6 percent increase in solar jobs in 2016, bouncing back from a sharp drop the year before but still trailing well behind the national average growth of 25 percent in solar jobs.

But experts said the nearly 400 new jobs in the state last year followed a drop of more than 2,000 in 2015, when a change in utility company charges to owners of solar-powered homes drove down demand for solar power installation.

Bryan and others blame the change on the state’s “net metering” rules, which had allowed solar system owners to get credits for excess electricity they put back on the grid. But utilities began imposing a fee on solar customers in 2015, and Bryan said the rooftop solar industry in Arizona “collapsed.”

“Utilities like SRP eliminating net metering in their service area or on any new installations literally killed rooftop solar in the SRP territory – so almost every installer left the area because they can’t make the projects pencil out,” Bryan said.

“The attractiveness of rooftop solar is just not there anymore because there is a surcharge that has to be paid to the utility for connecting your system,” he said.

But an SRP spokesman defended the practice Monday, saying the new price plan for residential solar customers lets the utility “adequately recover the cost rooftop solar customers impose on maintaining the energy grid, which they still rely on for electricity at night and when skies are cloudy.”

“Customers in SRP service territory who install solar on their homes today continue to save on their monthly SRP bill,” said Jeff Lane, the spokesman.

Calls seeking comment from other utilities and the Arizona Corporation Commission were not immediately returned Monday.

But an official with the Solar Foundation said net metering is an important part of the “favorable policy environment” that states need to ensure consistent growth in their solar industries.

“One of the important things is the ability to sell your excess power back to the grid at the retail electric rates,” said Ed Gilliland, senior director of programs at the Solar Foundation.

“About 45 states in the country allow you to do that. If you put solar power on your roof, an excess goes back to the grid at the retail rate,” he said. “A lot of utilities are pushing back on that rate.”

Gilliland said solar industry growth has started to spread from its traditional base in California and the Southwest, as payment incentives such as net metering have been effective in other parts of the country.

He said states like Massachusetts and Vermont, not typically thought of as centers of solar jobs, are going strong because they have encouraged solar development and have policies that support the industry. Massachusetts’ 14,000 solar jobs put it second to California, which dwarfed other states with 100,050 jobs last year.

Nationally, there were more than 260,000 solar workers in 2016, a near tripling of solar jobs in just six years.

“We’re not just having a good year, we’re having a lot of good years,” said Andrea Luecke, president and executive director of the Solar Foundation. “Seventy-eight percent of jobs are on the demand side, they have to do with people saying, ‘I want solar,’ and all those companies clamoring to make that happen.”

Luecke said growth is a direct result of falling solar costs for consumers.

The Solar Foundation report said it expects Arizona to see solar job growth of about 17 percent this year. Despite that projected increase, Bryan said the state’s net metering policies are not helping the situation.

“The utilities are legacy companies that want to protect their interest and they’re threatened now by distributed solar,” Bryan said. “They’re creating as many impediments to the industry as possible, but it’s subtle. It adds up to creating a really negative climate in this industry.”