A 2013 file photo of Rep. Trent Franks, R-Glendale, one of four Freedom Caucus members from Arizona. President Donald Trump attacked the caucus, whose opposition was key to the failure of a GOP health care plan, but most experts say members like Franks have little to fear from Trump’s threats. (Photo by Connor Radnovich/Cronkite News) 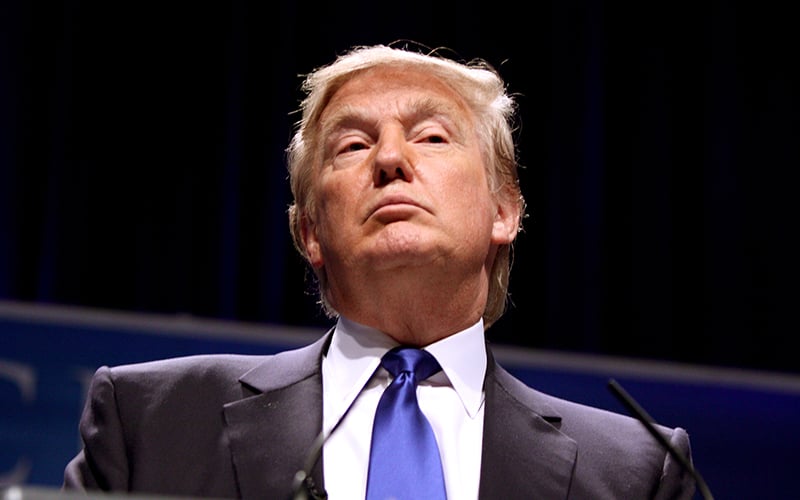 A week after conservative Republicans in the House Freedom Caucus helped defeat a GOP health care plan, President Donald Trump tweeted Thursday that they threatened the entire Republican agenda. If they didn’t get on board, he said, they could face re-election challenges in 2018. (Photo by Gage Skidmore/Creative Commons)

WASHINGTON – President Donald Trump took to Twitter Thursday to target the House Freedom Caucus, which helped block his Obamacare replacement bill, but analysts say the conservative Republicans in the caucus can likely withstand his threats.

Trump tweeted Thursday that the caucus’ intransigence could endanger the entire GOP agenda and if they won’t get on board “we must fight them, & Dems, in 2018!” He followed that later in the day with tweets directed at specific caucus members.

But political analysts said caucus members – including the four from Arizona – still have leverage in Washington.

“They’ve certainly drawn the ire of the president, but that doesn’t mean they’ve been rendered powerless. In a way it means they’ve had influence,” said Nathan Gonzales of Inside Elections, a nonpartisan analysis group.

The president’s most potent tool to corral an insurgency within his own party is to sponsor challengers in primary elections, but this is a practice with little historical success. Kyle Kondik, managing editor of politics newsletter Sabato’s Crystal Ball, noted that President Franklin Roosevelt tried targeting uncooperative Democrats in 1932 and “it was a bust.”

Trump is not likely to do much better against the four Arizona caucus members – Reps. Trent Franks of Glendale, Andy Biggs of Gilbert, Paul Gosar of Prescott and David Schweikert of Fountain Hills – who have little need for concern, said Bill Scheel, a partner at Arizona political consultancy firm Javelina.

“Does anybody leave themselves open or vulnerable to a primary challenge? I would have to say no,” Scheel said.

Franks was not available for comment Thursday, but was quoted in published reports as saying he is doubtful that Trump can find a candidate who can run to his right in his district.

The Freedom Caucus will hurt the entire Republican agenda if they don’t get on the team, & fast. We must fight them, & Dems, in 2018!

Gosar said caucus members are willing to work with the president, but will not relinquish their independence.

“The Freedom Caucus has always stood with President Trump to accomplish our shared goals,” Gosar said in a statement released by his office. “We will continue to do that by ensuring any healthcare reform legislation lives up to the promises we made to the American people.”

And the caucus will continue to have leverage as long as congressional Democrats remain uncooperative, analysts say. With relatively slim majorities in both chambers, Republicans need a unified body to pass legislation – and to keep the government from shutting down.

“If Democrats aren’t going to vote to avoid the shutdown, Republicans will have to vote to keep the government running with Republican votes,” Kondik said. “They can only afford about 20 defections.”

The Freedom Caucus does not release its official membership, but most counts put its ranks at around 30, enough to make waves in the party.

The president could marginalize the Freedom Caucus if reaches across the aisle instead of fighting Democrats. Gonzales said he has spoken to centrist Democrats who might be willing to work with the White House, even if it meant going against Democratic leadership in the House and Senate.

But Gonzales said the caucus’ vote on the American Health Care Act “proved that they still have influence and power, and I don’t think we can know for sure whether that was the end until the next fight comes onto the table.”

Scheel said the stances that Arizona caucus members held on the AHCA are not likely to cost them in the next primary election. Between opposition to the bill from Arizona healthcare and hospital groups, as well as Gov. Doug Ducey, “You knew that Arizona Republicans weren’t behind this thing,” Scheel said.

And the healthcare legislation performed poorly in opinion polls, so running a candidate against Freedom Caucus members based solely on their opposition to the act would be tough, said David Wells, a political science professor at Arizona State University.

“To primary challenge them you’d need a strong candidate who is also well financed,” Wells said. “That kind of work is well outside of how Trump ran his own campaign, which had little ground game – and relied on mass media attention and rallies.

“Trump also doesn’t have longstanding ties with the establishment if he wants moderates,” he said. “I just see it as a Trump twitter attack.”