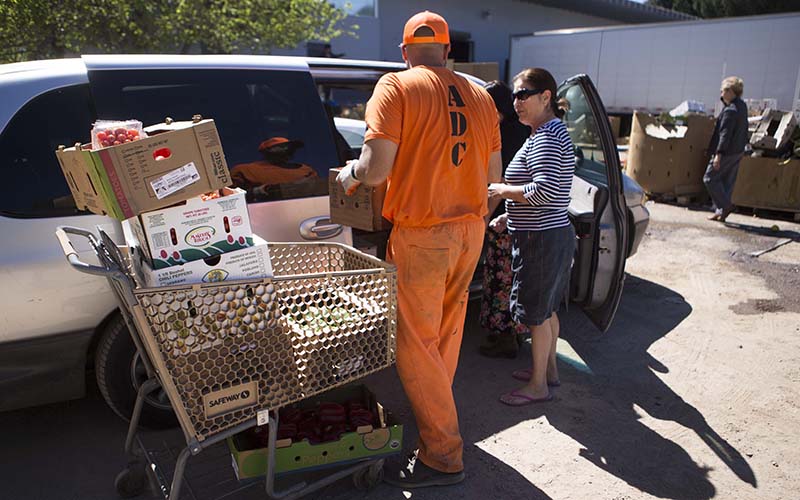 NOGALES — Food waste, the affordability of fresh produce, and prison inmate rehabilitation may seem like disparate issues, but a local food bank is approaching them all head-on.

The Borderlands Food Bank collects produce from Mexico, all of which is either excess produce for distributors or “ugly” produce that grocery stores won’t put on their shelves. Through several different programs, the nonprofit distributes the food to individuals and other nonprofit agencies across Arizona and in Sonora, Mexico.

Mohammad Abdollahi, who does community outreach for the food bank, said the produce would otherwise end up in a landfill, where distributors would have to pay to get rid of it. He said the food bank saves roughly 30 million pounds of produce each year and distributes it to about 35,000 different families.

“Food does not deserve to be in the landfill,” he said. “It needs to be in people’s mouths.”

Programs across the state

Located about 1.5 miles away from the border, the food bank has two 13,000-square-foot warehouses where it runs several programs including “Veggies R’ Us” – a market open to the public Tuesday through Friday. Anyone can get a shopping cart full of produce for a $5 donation. On Mondays, the warehouse is open for nonprofit organizations to come and take up to 10 boxes of produce for free.

“Borderlands Food Bank is not your typical food bank,” Abdollahi said. “We don’t know of any other food bank that operates the way we do.”

The fresh produce industry brings in $436.7 million to Santa Cruz County, where Nogales is located, according to a report from the University of Arizona. More than 85 percent of the 750,000 annual commercial truck crossings between Arizona and Mexico flow through the Nogales port of entry, according to the Nogales Port Authority. Trucks pick up produce to take to the food bank every week. 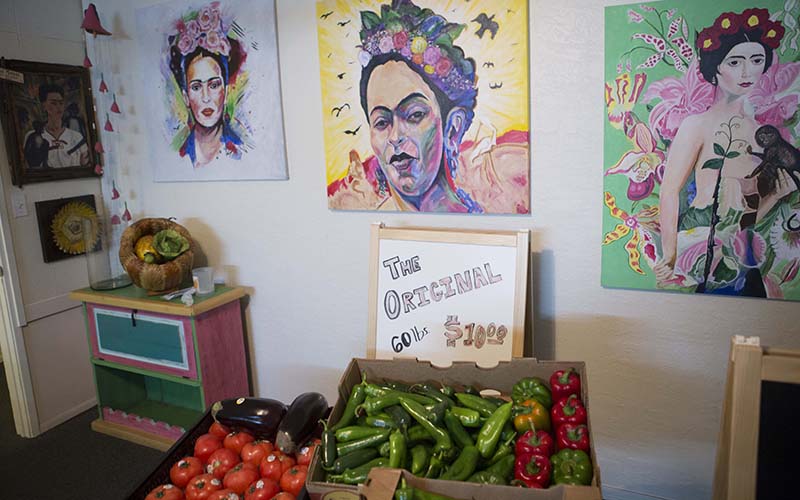 Portraits of Frida Kahlo at the Nogales, Arizona office of the Borderlands Food Bank, painted by inmates who help the organization. The food bank offers low cost produce to area families. (Photo by Johanna Huckeba/Cronkite News)

Abdollahi said people who discover the food bank often wish they knew about it earlier. He said none of the produce at the food bank is inferior to regular produce – it just couldn’t be sold in stores.

“That’s one of the main misconceptions people have – they think we go to the landfill and pick up produce,” he said. “We prevent produce from ending up in the landfill so that it can go to families that need more produce in their diets.”

Juan Borbon, 57, a “Veggies R’ Us” shopper at the warehouse, said he initially heard about the food bank on the radio. He gives the produce he buys to those in need in his village in Sonora.

“There was no way that I was going to finish all this produce myself, so I figured why not give it away to people who are hungry?” he said in Spanish.

Abdollahi said one of the main wishes of the food bank is to get funding for a cooled warehouse. The food bank doesn’t take in much fruit because that requires more cooling, Abdollahi said.

He said the length the produce stays at the warehouse is based on how ripe it is.

“It’s sort of the same system you have in your fridge – if you buy new eggs you’ll eat the used eggs before you eat the new eggs. We sort of have that system here except for with 30 million pounds a year,” he said.

One of the other main programs at the food bank is P.O.W.W.O.W. – “Produce on Wheels With-Out Waste.” Borderlands partners with about 112 organizations to host pop-up produce markets as far as all four corners of the state every Saturday, Abdollahi said.

After the markets close, the produce is available for free pickup to agencies that have signed up as “P.O.W.W.O.W. After Hours” agencies. Agencies can take up to 10 boxes.

“We’ve had to try and figure out lots of different ways to get rid of produce so we can take more in,” Abdollahi said.

At the “Veggies R’ Us” market last Friday, men in orange clothes could be seen carrying boxes of tomatoes and peppers in and out of the warehouse, helping shoppers fill their carts with produce and preparing canvasses for art projects.

The food bank’s warehouse has a work partnership with the Arizona Department of Corrections to employ 11-12 inmates who are nearing the end of their sentences. The inmates work at the warehouse Tuesday-Friday helping out with everything from unloading trucks and sorting produce to packing the trucks that go out to weekly pop-up markets and packing shopping carts for the “Veggies R’ Us” program.

Inmate Aaron Wamsley, 33, helps a customer unload a grocery cart of produce at the Borderlands Food Bank in Nogales, Arizona. Inmates help out at the food bank which offers rescued produce. (Photo by Johanna Huckeba/Cronkite News)

Abdollahi said Yolanda Soto, president and CEO of Borderlands since it began in the mid-90s, calls the inmates the “backbone” of the organization.

Aaron Wamsley, 33, is an inmate who works “the line” unloading produce from the trucks and helping community members outside pack their carts. He said the warehouse often stays open past the “Veggies R’ Us” hours of 9 a.m. to 1 p.m. because people still show up.

“A lot of the people who come here are people who actually need (the food),” he said. “If somebody shows up and they need it, we’re gonna hook them up.”

Tim Casner, a 52-year-old inmate, does maintenance and works on art projects for the facility. He was priming an old cabinet in one of the facility’s offices to make a painting of a Buddha.

Inmates must show good behavior in prison to participate. Casner said the first time he came to the facility was the first time he stepped outside of a prison in 16 years. He said he stood still for a minute to take it all in.

“It’s freedom,” he said. “Simply freedom is what it feels like to me.”

The hallways and walls of the offices in the warehouse are covered with artwork – all of it by inmates. Casner said working on art projects in prisons is different than doing so at the food bank.

“You’re painting murals in a prison, but you feel like you’re a criminal,” he said. “Out here, they treat you like a regular person.”

In addition to curbing food waste and offering inmates work opportunities, giving people access to nutritious food is another aim of the food bank.

“Everyone needs to have healthy produce available to them,” Abdollahi said. “There’s a lot of people that could really benefit from just having some added produce, and even people that think they’re not food insecure would probably eat a lot more veggies if they had access to 60 pounds of veggies for $10.”

He said 26 percent of the produce from the food bank was distributed in Sonora, Mexico, for the 2014-2015 year.

The food bank also recently purchased a dump truck for its recycling program. Borderlands partners with about 13 ranchers in the area and provides them with cow feed and compost made with produce from the food bank that goes bad before it is sold.

“We have really good produce that, if people don’t come and take it on Saturdays (at the pop-up markets), goes to the animals, which is not horrible, but we know there’s more people that need it,” he said.

Compost is also available for community members at the warehouse.

The local community is the heart of all the various programs at the Borderlands Food Bank, Abdollahi said.