A bulldozer crawls over a pile of coal at Peabody’s Kayenta mine on the Navajo Nation in this 2012 photo. President Donald Trump signed an executive order that he said will help bring back mining jobs, but critics say market forces will hold back those jobs. (Photo courtesy Peabody Energy) 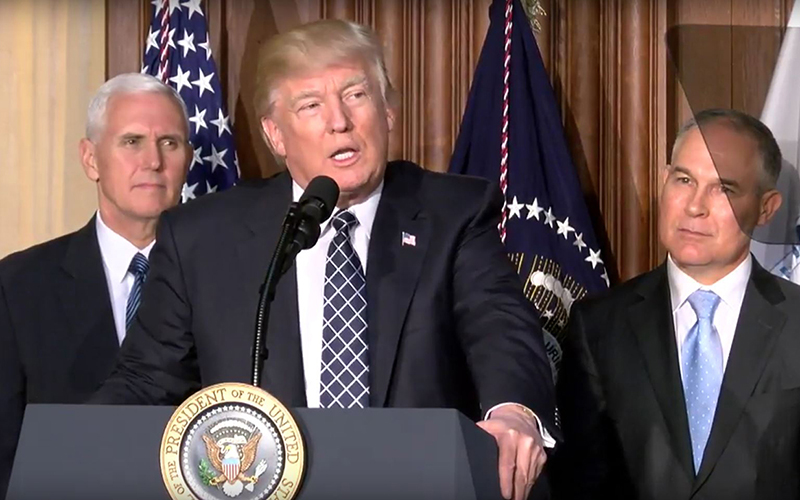 WASHINGTON – President Donald Trump’s executive order rolling back at least a half-dozen Obama-era climate policies will not save coal jobs as the president claims, but it will definitely harm the environment, critics said Tuesday.

The president, surrounded by a group of miners in an Environmental Protection Agency auditorium, signed the order calling for a review of the EPA’s Clean Power Plan that limits greenhouse gas emissions from power plants and repealing a moratorium on new coal leases on federal land.

The order also rescinded other orders by President Barack Obama on everything from methane emissions to private development to a directive that instructed federal agencies to prepare for the impacts of climate change.

But critics said Trump’s order cannot reverse the market trends that cost jobs in coal-mining states like Arizona, where economic forces led to the planned closing of the coal-powered Navajo Generating Station in Page.

“Coal is more expensive and much more polluting than the cheaper alternatives. The market has already spoken on those damn plants,” said Vera Pardee, an attorney with the Center for Biological Diversity. “Whatever he (Trump) does, he’s not going to change the market.”

Pardee cited cheap natural gas and other forms of energy, such as renewables, that have undercut the price of energy produced by coal-fired operations like the Navajo Generating Station. That closure could put more than 800 jobs, most held by Navajo or Hopi tribal members, at risk at the plant and nearby Kayenta mine that feeds it coal.

“Instead of keeping these old, dirty, polluting power plants that make us sick, that give us asthma and that causes us to lose work, why not put renewable energy in Arizona and train those that are losing their jobs in the Navajo Nation?” Pardee asked.

But while critics questioned the effect Trump’s order, industry officials praised the move.

“The Clean Power Plan and the moratorium (on new leases) served the interests of political activists, not the American people,” said National Miners Association President and CEO Hal Quinn in a prepared statement.

But Pardee said getting rid of the Clean Power Plan is not so easy.

In addition to likely court challenges, she said the president will have to go through a demanding rule-making process to overturn the plan. Pardee said rules under the Clean Power Plan are currently in effect to build new or modify existing power plants, but the one regulating existing plants is frozen and being litigated in federal court.

Advocates in Arizona agreed with Pardee, saying the effects of the order would not be good for the state – economically or environmentally.

Bahr said communities that rely on coal jobs, such as the Navajo and Hopi, need sustainable plans to transition into renewable energy rather than dragging out the inevitable decline of coal power.

“It’s time to move beyond burning fossil fuels that are literally choking us with pollution and are harming the planet, our health, our welfare and our future,” Bahr said.

“People in Arizona want clean water and clean energy,” she said. “His (Trump’s) efforts may help line the pocket of a few executives but they’re not going to help working people.”